Stealth.  A single word that brings to mind such images as a ninja assassin preparing to strike or an unseen jungle cat ready to pounce on its prey.  In aeronautical terms, it implies an ominous black jet flying into enemy territory undetected and dropping its deadly cargo with impunity.  Of course, ninjas' jungle cats', and stealth jets' reputations are a just as much a product of Hollywood as actual history.

For most of us, the idea of a stealth fighter came to light in the 80s, when the "teen" series of fighters seemed to miss a number.  There was an F-14, F-15, F-16, YF-17, F-18...  Then the rather lesser known F-20 and F-21.  No F-19.  This, along with rumours of a top secret aircraft being tested, led to the speculation of a stealth fighter.  Many artist's renderings, model kits, and even a flight simulator computer game were released based on an aircraft the U.S. government denied even existed...  Until 1988.

In 1988, the USAF finally introduced its F-117 Stealth Fighter, nicknamed the Nighthawk.  Much unlike the curvy artists' renderings of that preceded it, the F-117 was rather ungainly looking and seemed more like a flying origami sculpture than a sleek fighter jet.  It didn't even sound that impressive on paper, as it didn't even go supersonic and had a bomb bay that held no more than two bombs.  No cannons, no air-to-air missiles, no laser death rays.  Despite having the "F" designation, the F-117 really was nothing more than a very light bomber.

For a generation used to jet fighters being more like Tom Cruise's Top Gun, the F-117 certainly seemed rather dull.  Stealth was now here to stay however, and the over next few years would see the introduction of the B-2 stealth bomber and the F-22 and F-35 stealth fighters.  Russia, China, even India and Iran have started developing prototypes.  Stealth has become a "must have" for the USAF followed by everybody else.

Why?  Because stealth has been proven to work.

During the Gulf War, the F-117 represented a mere 2.5% of the allied aircraft flying over Iraq.  Despite that small number, it was responsible for destroying 40% of the strategic targets.   The F-117 flew 1,271 sorties, with an 80% success rate, and not a single loss.  It's hard to argue with those numbers.  The F-117 also flew during the second Iraq war, Afghanistan, and the former Yugoslavia, where it suffered its only combat loss (more on this later).

The Northrop B-2 "Spirit" stealth bomber has had a similar track record to the F-117.  With a much farther range and a much higher payload, the B-2 has proven itself over Iraq, Afghanistan, Kosovo, Libya, and it was even considered as an alternative to the now famous Bin Laden raid.

Although it has yet to see actual combat, the F-22 Raptor seems to be another example of stealthy superiority.  It is heralded by many as the best fighter plane ever built, and it is expected to hold that crown for the foreseeable future.  In combat exercises, it has reined supreme, achieving some unbelievable kill ratios.

With stealth's overwhelming advantage, it will undoubtedly become standard on nearly all military aircraft, much like the jet engine did in the late 1940s and 1950s.  Right?


For every successful stealth design, there are a handful of failed prototypes.  The RAH-66 Comanche, the A-12 Avenger II, even the Sea Shadow naval vessel. all mostly abandoned due to cost issues.

Even the successful designs aren't known for their affordability.  F-22 production was recently halted by the U.S. government well ahead of the planned 750 aircraft due to high costs, listed as anywhere between $200-$350 million per copy.  The B-2 stealth bomber actually actually holds the world record for the world's most expensive aircraft.  The F-35 program is considered to be the most expensive weapon system program of all time.


Stealth aircraft are designed using special shaping methods and construction materials to disperse and absorb radar waves.  Parts of the aircraft have to be actively cooled to to keep the infrared signature down.  Electronics need to be properly shielded to avoid giving away any unwanted electronic "noise".

The B-2 bomber requires special climate controlled hangers to maintain its stealth skin.  The F-22 is so expensive to fly that training hours have been cut to lower costs.  Also, the adhesive used in in the F-22's stealth coating has been blamed for causing health problems and oxygen starvation of its pilots and ground crew.

True stealth capability must be built into an aircraft while it is still on the drawing board. Although there are ways to make an existing aircraft platform stealthier, these methods simply can't match a design with stealthiness built into from the start.  It's shape, the materials used, even the position of the engine all have an effect.  Since externally mounted fuel tanks, weapons, and other equipment can spoil the stealthy shape of an aircraft, stealth aircraft need to mount their weapons in internal weapons bays.  This adds to the aircraft's weight and increases drag.  Also, what makes for a stealthy design does not always make for a aerodynamic design.  Only computer aided flight control makes stealth aircraft possible.

Now, the F-22 and the F-35 are both capable of mounting external fuel tanks and weapons.  Doing so however, compromises the aircrafts' stealthy shape to the point where they can no longer be considered a "stealth" aircraft.

Much has been said about the F-117's combat effectiveness.  What isn't always mentioned is how meticulously planned its missions were.  Flightpaths were chosen to avoid enemy radar, radio silence had to be kept at all times, care had to be taken to avoid wet weather (the F-117's major weakness), and all flights took place after dark to avoid visual detection.

Even in more modern stealth aircraft, care must be taken.  Radar use is kept to a minimum.  Ideally, radar lock would be achieved by one aircraft, while a closer aircraft uses a data link for targeting information.  Even basic manoeuvres must be kept to a minimum to avoid exposing part of the aircraft that is not-so-stealthy, such as a metal engine nozzle, or altering the shape of the aircraft by moving its ailerons and elevators (this is one of the reasons why the F-22 has vectored thrust nozzles).  Manoeuvring also increases the aircraft's heat signature, enabling it to be detected by infrared.

Imagine your typical submarine movie scene.  Attempting to remain undetected by the enemy, the crew speaks in whispers, shuts down all non-essential gear, and slows down to a snail's pace.  That's a more accurate depiction of stealth.

In March of 1999, a F-117 was shot down over the former Yugoslavia with an antiquated 1960s era S-125 "Neva-M" surface to air missile.  Reports state that the S-125 was able to detect the F-117 by using a longer wavelengths than the typically used (but more accurate) X-band radar.  This was enough to fire two missiles at the F-117, with one exploding close enough to the aircraft to knock it down. 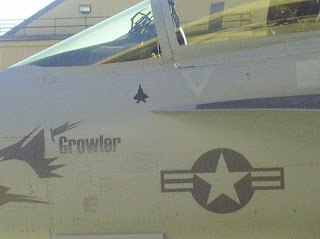 At an airshow, a EA-18G was displayed showing rather surprising "kill" artwork on its fuselage.  When asked, the pilot stated it was there "Because this is the EA-18G that killed an F-22".  What the details of the story are is anybody's guess, but it seems telling that an aircraft that focuses on electronic warfare rather than direct combat could get the jump on an aircraft said to be far superior to any other jet fighter in service.

Neither the F-117, nor the B-2 have air-to-air capabilities.  The F-35 is still in development, as are foreign designs like the Sukhoi T-50, Chengdu J-20 and Shenyang J-31.  This leaves the F-22 "Raptor" as the only stealth fighter currently in service.

Oddly enough, the F-22 has never seen actual combat service.  This, despite it being active and combat ready during the U.S.A.'s involvement in Afghanistan, Iraq and Libya.  Perhaps the F-22 is simply to expensive to risk in combat, or the enemy in those locations were not considered "worthy" of the USAF's flagship aircraft.

The F-22 does boast a rather impressive kill ratio in simulated combat.  The rules of engagement of these mock battles isn't made clear, however, so it is hard to determine if these scenarios were in fact a "fair fight" or if conditions were skewed to favour the F-22's strengths (emphasis on BVR combat, AWACs support, etc).


What is interesting, however, is the tale of a German Luftwaffe pilot describing the F-22's weakness when it comes to WVR (within visual range) combat.  The big, hot F-22 was considered "Raptor Salad" by the smaller, tighter turning and faster accelerating Eurofighter Typhoon, which was able to take advantage of its IRST (infrared search-and-track) and helmet mounted sight to keep the F-22 in its sights.

Given lesson's learned over Vietnam, where the missile-only equipped F-4 was supposed to own the skies over its more primitive dogfighting opponents, it would seem that technological superiority doesn't always win battles.