Sorry it's been a minute since my last post.  Over the last few months, I've made the foolish decision to attempt basement renovations whilst being a healthcare worker in the time of COVID.  Skyrocketing building material prices, forced overtime, and general sensation of existential DREAD has not been kind on my free time...  Nor my psyche.
But hey!  Whenever I feel like I'm in a never-ending clusterf*ck being constantly told "It will all be over soon." I remind myself...  Canada's CF-18 replacement program should also be over soon!
Or will it?
After years of speculation, controversy, a few Federal elections, an "interim fighter purchase" (that went south) and other nonsense...  Canada really does not seem to be much closer to buying new fighter jets...  Just a few used ones.  This, despite speculation that the newly formed Liberal government would choose two finalists shortly after reconvening last month.  So far, it has done no such thing.
Rumor had it that Saab's Gripen E would be disqualified given possible issues with meeting security requirements.  This has yet to happen.  If it did, it would almost certainly guarantee a win for Lockheed Martin's F-35 Lightning II.  This would run contrary to the Liberal Party of Canada's former promise NOT to buy the stealth fighter.
Why do I say this? 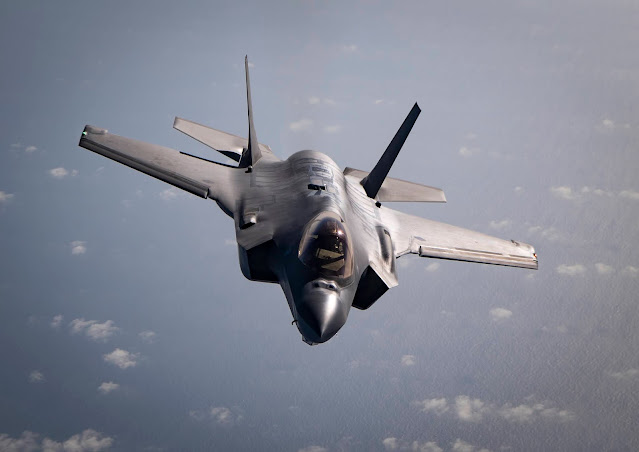 Despite its well documented teething issues, the F-35 has all the momentum right now.  The Pentagon REALLY wants this fighter to be a success; and it has just about all the marketing support it could hope for right now.  Best of all, as the platform has matured, it has become more affordable and reliable.
If Canada does end up purchasing the F-35 after more than 10 years of delays, at least we can take solace in the fact that we avoided the more troublesome early builds of the aircraft.
Of course, the F-35 continues to be an expensive aircraft to purchase and operate.  Much has been said about the JSF unit cost becoming more affordable; but it looks like the price has "bottomed out" at $78 million per copy.  Unfortunately, sustainment costs continue to be much higher than anticipated.

The GAO forecasts F-35As would cost $7.8 million per plane per year of operations—$3.7 million more than the Air Force’s ‘affordable’ budgetary target. That means the service must reduce operating costs by 47% to attain affordability. The GAO report claims that even if spare parts were furnished for free, the F-35A would overrun budget targets.

Costs remain high, but at least the F-35 has managed to impress with its capability.  Despite earning the nickname "Fat Amy", the F-35 does seem to impress those that have flown it.  There is no denying that its combination of sensors and stealth offer some distinct advantages in a strike fighter.  Combine that with payload and performance characteristics that match or exceed the F-16 and F/A-18 it is meant to replace and it is clear why those who like it, like it a lot.

I have had my issues with Billie Flynn in the past.  He has been far too flippant about going to war; calling it "play" and that Canada "wouldn't be allowed" unless we had the latest and greatest.  His bias towards the F-35 is overwhelming; but its understandable given his employment with Lockheed Martin and his closeness to the program.  Given this, one does tend to take his word on the JSF with an enormous grain of salt.  However, the fact remains that he is eminently qualified and incredibly well spoken.  In short:  I may not fully agree with him, but certainly do respect him.  (You CAN do that, despite what recent social media rhetoric would have you believe.)

That being said, I highly recommend you check out Billie Flynn's appearance on the Fighter Pilot Podcast here:

After listening to someone so imbedded into the JSF program, one can understand why they find the F-35 so endearing.  What's not to love about a stealthy F/A-18?

Speaking of the F/A-18, the news from Boeing has been...  Less promising. 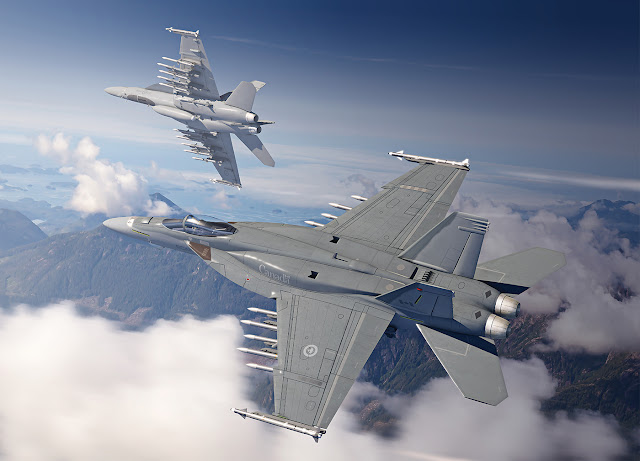 Many of you will remember Boeing's illustration of a Block III Super Hornet in RCAF colors sporting an impressive amount of AMRAAMs, CFTs, and and belly tank likely equipped with IRST.  Something about this picture just seems...  right.  The familiar shape of a the F/A-18 equipped with a ridiculous amount of missiles yet still carrying plenty of gas thanks to those CFTs and that combination IRST/fuel tank.  One can easily imagine it successfully intercepting Russian bombers over Canada's far north.

Such a beast would seem to be ideal for a Canada, a well-armed workhorse capable of marathon-like ranges thanks to all that extra fuel...

Except a Super Hornet as pictured looks increasingly unlikely.

Those conformal fuel tanks likely will never see production.  Technical issues have forced the USN to cancel their plans to equip the tanks.  Thus far, it is unclear exactly why, but the issues seem to be related to "carrier deployment".  This suggests that the tanks may not be a problem for ground-based operations.

Unfortunately, since the original plan was to upgrade the USN's entire Super Hornet fleet to the Block III standard, that is a lot of lost sales.  Any purchaser of the Block III Super Hornet would have to take on the additional cost and risks of the CFTs themselves.  (Hint: probably not)

The cancellation of the CFTs actually have further repercussions because those CFT made up for the reduction in the fuel carried in the FPU-13 belly tank equipped with the IRST21.  That means an IRST equipped Super Hornet with a belly tank may still need to add additional fuel in the form of wing tanks...  On those crooked pylons...  Adding significant drag and reducing the amount of weapon hardpoints.

The truth is, the Super Hornet is becoming a consistently harder sell.  The USN is losing interest in the platform, preferring to simply upgrade its existing fleet while it concentrates on procuring newer aircraft like the F-35C and whatever the F/A-XX ends up being.  Simply put, the Super Hornet offers very little that the F-35C does not.  Yes, the Rhino is a little more versatile, but when it comes to bread-and-butter strike and air-superiority missions, one struggles to find a situation where the Super Hornet would be preferable to a stealthier platform with similar performance, range and payload capability.

Combine that with Boeing's recent...  Questionable track record.  Work on the troubled KC-46 continues at a seemingly glacial pace.  The disastrous 737 MAX is still fresh and everyone's minds.  Even Boeing's Starliner space capsule is dogged with delays and controversy.

While many criticize Lockheed Martin for profiteering off the F-35 enormous cost overruns, at least they did so delivering something new.  Boeing seems to have issues delivering technology that was seemingly perfected 50 years ago. 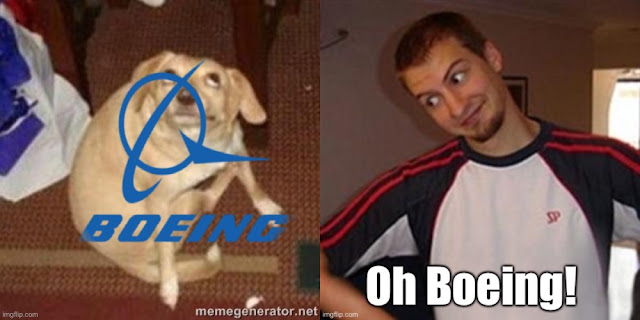 Combine all of Boeing's recent technical failings with its ill-fated predatory action against Bombardier and you start to wonder why Canada would give Boeing the time of day, let alone a multi-billion dollar fighter contract.
It has been said elsewhere that Boeing's corporate culture emphasizes profits far and above innovation and safety.  This has led to a company that promotes MBAs to the highest levels while outsourcing its engineering department.  Boeing's biggest success story in recent years, the T-7 Red Hawk, was mostly developed by Saab.  Go Figure.
And how about Saab? 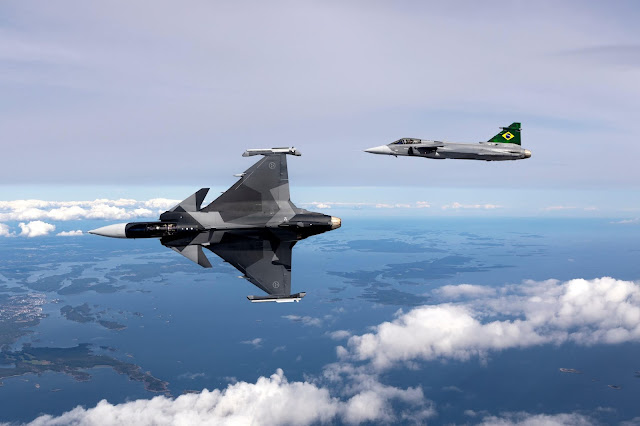 The past few month have been rather drama free for the JAS 39E Gripen.
Saab has several Gripen E's on the assembly line being build for delivery to both Sweden and Brazil next year.  It has developed a novel new way to navigate in a GPS denied area.  Saab has also experimented with repairing Gripens with 3D printed parts, speeding up repair.   It is still in the running for Finland's HX fighter program as well as others.
Increasingly, the Gripen is being seen as a lower cost, non-stealthy alternative to the JSF.  That is not a bad place to be.  Whether or not it will be enough for the RCAF remains to be seen.
With any luck we should find out relatively soon.