For those of you wondering how Saab lost the FFCP competition, new information has come to light...

According inside sources, the initial scoring of the two fighters was incredibly close.  The F-35 did indeed win the "Capability" category (worth up to 60%) while the Gripen E ended up being ahead on both price (worth 20%) and industrial offsets (worth the remaining 20%).

According to my source April Furst, who is currently serving an internship in the House of Commons.  The ultimate decision was made rather hastily while the final scores were being tallied up.

"Due to COVID restrictions and renovations, the FFCP committee were forced to convene in a remote office located in the basement of the Parliament building.  You could tell it wasn't used very often.  Lots of cobwebs, and the whole place smelled musty and moldy.

"The committee members were doing their thing, going down each individual line of the respective offers.  It was actually pretty close, by the sounds of things...

"They got to the part of Saab's proposal regarding IMP doing final assembly on Canadian soil...  Then things started to get WEIRD.

"Despite being in the basement, we could all feel a cold draft.  The lights started to flicker on and off.  The musty smell seemed to disappear, replaced with the odor of Brylcream and cheap Scotch whiskey.  Just then, a ghostly apparition appeared!  It appeared to be an angry man in his mid-70s, his hair was white and matted down with some sort of greasy adhesive...  Yet still had a peculiar wave to it.  His eyes were both angry and piercing.  Jowls shook back and forth over rotten teeth.  He appeared to be dressed in a suit that was both incredibly boring yet disheveled.

"Groaning loudly, the apparition floated over the table where all the papers were located.  He pointed at the chart detailing Saab's plans to build a fighter jet in Canada and said one word:  'NO!'

"The apparition then disappeared as quickly as it appeared...  With the word 'NO' still echoing through the halls.

"Terrified from what what they had just seen, all the committee members looked at each other in shock.  Eventually, somebody said: "Sooo...  F-35 then?"

"Everyone hastily agreed, stacked all the papers together and got out of that room as quickly as they could."

Ms. Furst could not not precisely describe who the apparition appeared to be.  She would only describe it as "the stuff of nightmares". 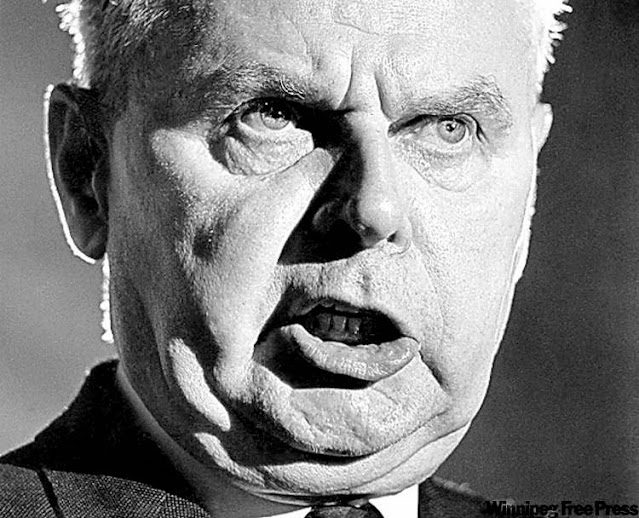