One of the most predominant people in the Canadian F-35 saga is Lockheed Martin test pilot William (Billie) Flynn.  Flynn's resume certainly is impressive.  Before working for Lockheed Martin he was a CF-18 pilot and commanding officer for 441 Squadron at CFB Cold Lake.  He's flown combat missions over Kosovo, and has seat time with some of today's most impressive fighter jets, including the F-18, F-16, Typhoon, Tornado, and of course, the F-35.  He's even married to real-life astronaut.

Without a doubt, Billie Flynn knows much more about the fighter jet business than I do.

But why does he say so many stupid and ridiculous things?

Flynn claimed that the F-35's kinematics were better than a Super Hornet or a Typhoon.  He was immediately called out by a fellow test pilot.  The F-35 has nowhere near the thrust-to-weight, nor the wing-loading of a Typhoon.  Downgrades to the F-35's performance specs don't do much to back up Flynn's argument either.  The best I can figure out is that Flynn is comparing a full internal load F-35 (about 5,000lbs of weapons) with a Typhoon carrying a full external load, which can get as high as 16,500lbs worth of bombs, missiles and extra fuel.

Sure, whatever, Billie works for Lockheed Martin. It's his job to make the F-35 look as capable as possible, while downplaying the effectiveness of the competition.  Test pilots seem to be seem to be more and more like Don Draper nowadays, and less like Chuck Yeager.

In a recent article in the Globe and Mail, there is a quote from Billie Flynn that goes far beyond simple marketing speak, and simply enters the realm of stupidity and callousness:

"Not be allowed to play?"

You wouldn't think someone with actual wartime experience would say something like this, but there it is.

Military actions aren't some sort of damn sports event where you aren't allowed on the field without the right equipment.  Warzones aren't golf courses requiring a dress code and a tucked in shirt.  Military strikes are the last resort when diplomacy doesn't work.  They aren't some international dick measuring competition where coalition forces get together and show off their latest gizmos.

Going to war means that many of our best will sacrifice their lifestyles, their health, their very sanity.

Going to war means families will be ripped apart.

If Canada gets dragged into a war, it won't be to show off.  If for some reason, we aren't allowed to join a coalition, then we obviously weren't needed there in the first place.  As a civilized society, and as a country with a peaceful reputation, our aim is to avoid war...  Not to join in with the warmongering nations just because it is the "in thing to do". 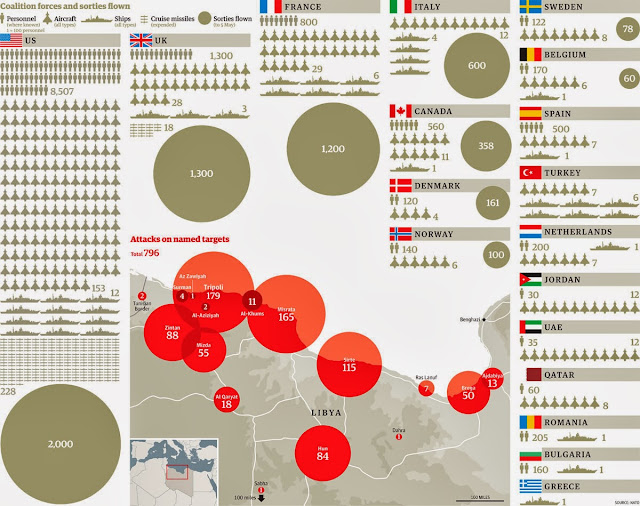 See that graphic above?  That's a representation of all the coalition forces that participated in the Libyan campaign of 2011.  Just to name a few of the many aircraft that participated, the UK sent Typhoons, the French sent in Rafales and Mirages, Canada sent in CF-18s, Sweden sent in Gripens.  F-16s from various countries joined in, as did just about every aircraft in the American arsenal (except for the F-22).

Despite the many different forces operating many different types of equipment, the operation was more-or-less a success, and nobody wasn't "allowed to play" because they didn't have the right equipment.  Yes, there were some issues, but certainly nothing requiring that each partner nation to bring identical equipment or go home.

I'm not sure what kind of club Billie thinks Canada needs to join, but I don't think I want to be a member.
Billie Flynn F-35 JSF Libya Lockheed rant