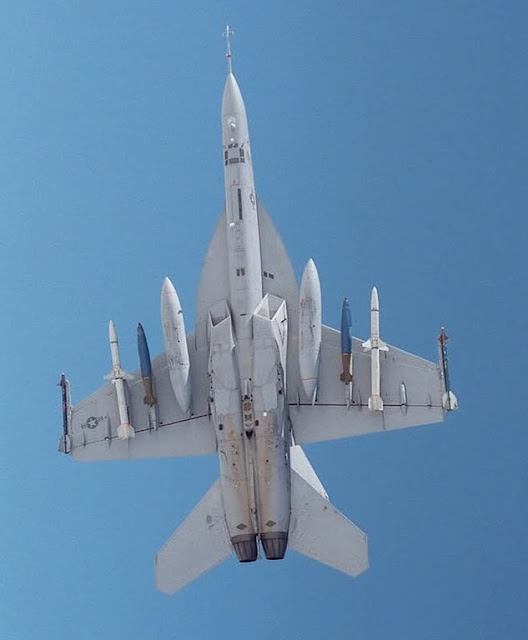 [Welcome to "NITPICK"!  For the next few weeks I will be examining a single aspect of the potential fighters that just drives me nuts.  These are not dealbreakers, or even major flaws.  They are simply one aspect of the aircraft THAT COULD HAVE BEEN DONE BETTER.]
You knew we were going to have to mention this.
It is a tale almost as old as the Super Hornet itself.  Whenever a bunch of fighter nerds gather to talk about the Boeing F/A-18E/F Super Hornet, someone will almost inevitably bring it up:
"BUT WHAT ABOOT THOZE CANTED PYLONZ?"
What about them? 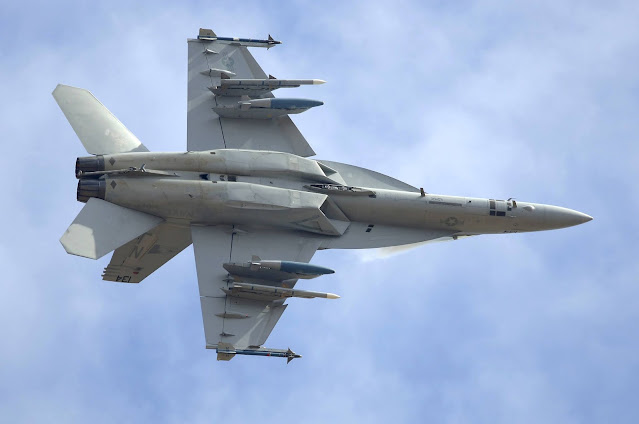 As we all know, the Super Hornet was developed in response to the cancellation of the A-12 Avenger II.  Intended to replace the aging A-6 Intruder, the stealthy A-12 was kiboshed after years of being behind schedule and overbudget.  Faced with an aging fleet of F-14s and A-6s, the USN split the difference by "upsizing" the F/A-18 Hornet.
It was a genius move in retrospect.  While its kinematic performance falls short of the Tomcat, the Super Hornet has proven itself to be a solid workhorse.
Being a larger aircraft with more powerful engines, the Super Hornet can carry more fuel and more weapons.  Despite being fast and agile as a typical fighter, its maximum payload is almost that of the A-6.
Being bigger gives it more space to mount weapons as well.  Those larger wings manage to fit an additional weapon pylon under each.
Unfortunately, this is where Boeing engineers ran into some trouble.
Whilst undergoing wind tunnel testing, it was discovered that some stores might not separated cleanly when released.  Instead, they would collide with other stores or even the aircraft itself.  Needless to say, this was a bit of a safety issue.
Boeing answer was simply point the pylons in a different direction than where the aircraft is going.
The Rhino's pylons are canted outwards at ever-so-slight three degrees.
It is a fairly minor thing.  From most angles, it is not even noticeable.  Look at the aircraft from the top or bottom and it becomes completely obvious.  You simply cannot unsee it.
It is maddening.
Not so much that it was done in the first place as a possible short term solution...  What is maddening is that they have never bothered to fix it.
For almost 30 years now, the Super Hornet has made do with pylons that fly a different heading than the aircraft they for which they are affixed.  Those canted pylons add additional drag as-is, more so when festooned with the usual weapons or fuel tanks.
What really enervates me about the Super Hornet pylons is that this was a design decision.
At some point in the process, this issue was discovered.  After finding an inelegant and inefficient solution to the problem, it was forgotten about.
Someone signed off on this.
A bunch of engineers were likely summoned to boardroom filled with Boeing executives and high-ranking navy personal, explained the issue along what was likely intended to be a temporary fix.

...In summary, we have found that canting the pylons outward has resulted in successful stores separation.  This, of course, is not optimal.  With further study and modifications, we believe that...

-You said that canting the pylons fixes the problem?"

If you can think of another reason why a multi-billion dollar strike fighter project leaves the drawing with crooked weapon pylons...  Let me know.