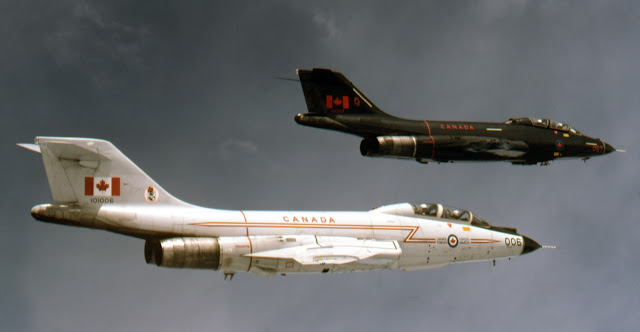 Welcome to Hindsight 2020!  For this series we will be taking a look at Canada's past fighter purchases and asking a simple question:  "Did we make the right decision?"

We will look at the aircraft itself, compare it to the alternatives available at the time, and determine whether or not Canada picked the right aircraft.

The CF-101 Voodoo is a Cold War icon.
Operating between the years 1961 and 1987, the McDonnell Douglas CF-101 Voodoo served as Canada's chief air defence against the threat of Soviet bombers.  Stationed all over the country, the Voodoos were readily available at any time to meet possible air threats at a moment's notice.  Big, loud, and with the iconic red and white lightning bolt painted on its flank, the CF-101 was unmistakable.  So much so that the Voodoo is more often remembered for its RCAF service than its time in the USAF.
Acquired to replace the aging CF-100 Canuck, the CF-101 filled the role of long range, all weather interceptor.
Initially intended as a long-range bomber escort (akin to the P-51 Mustang) derived from the XF-88, the F-101A would instead see use as a fighter bomber as jet-powered bombers like the B-52 and B-58 made escorts unnecessary.  What the USAF did need, however, was interceptors.  With the F-102 Delta Dagger hitting delays, the decision was made to modify the F-101 into an "interim interceptor".  The resulting aircraft, the F-101B, was a substantially different aircraft.  It featured a two-seat cockpit, Hughes MG-13 fire control radar, and a SAGE data-link.  Instead of cannons, the F-101B was fitted with a rotating pallet designed to carry four AIM-4 Falcon air-to-air missiles.  Later versions (including the CF-101) would replace two of these Falcons with nuclear-tipped AIR-2 Genie rockets.
The acquisition of the F-101B into the RCAF was controversial to say the least.  Not only was it filling a void left by the cancelled CF-105 Avro Arrow, but its use of nuclear rockets seemed contrary to Canada's stance against atomic devices.  As such, the Genies were technically not Canadian, but rather considered to be in American custody and would only be armed under a joint agreement under NORAD.
First introduced in 1957, the Voodoo came at a tumultuous time in aviation history.  Quantum leaps in aerospace engineering fueled by Cold War posturing led to rapidly evolving aircraft design and technology.  Like most of the fabled "Century Series", while cutting edge at the time of its introduction, the Voodoo was quickly made obsolete by fighters that came only a few years after it.  Remember those AIM-4 Falcon missiles?  They were found to be ineffective during the Vietnam war and fell out of use in favor of the AIM-9 Sidewinder and AIM-7 Sparrow.  Unfortunately, neither saw use on the Voodoo.
By the time Canada had begun operating the CF-101, the USAF and USN had already moved on to the superior F-4 Phantom II.  By the time the RCAF retired the CF-101, it was well past its prime as an interceptor, having been superseded by not only the F-4, but by fighters like the F-14 an F-15 as well. 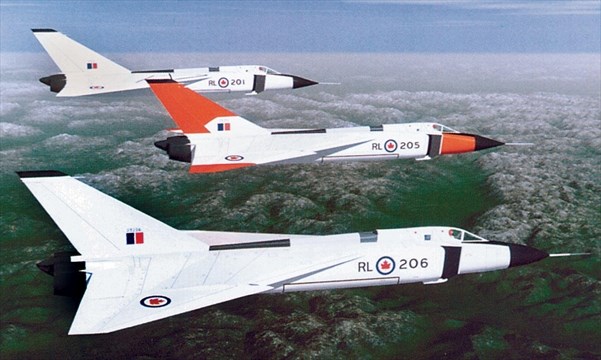 We all know where this is going.  Is there any point in discussing anything else?  The real question is not whether or not the Voodoo was the right choice; but whether or not the Diefenbaker government was right to cancel the Avro Arrow program.  (Spoiler alert:  IT WAS NOT)
We all know the story.  We have all heard the conspiracies.
Ultimately the rational for cancelling the Arrow came down to two factors:  First, it was economically unfeasible.  Secondly, the development of ICBMs had made long-range bombers and (by extension) interceptors obsolete.  Looking back we can that neither of these turned out to be true.
The Avro Arrow program was expensive, that much is not up for debate.  It was consuming so much of Canada's military budget that the Army and Navy were both strongly opposed to it out of concern that their funding would be in danger.  In reality, escalating air force budgets would be simple fact throughout the Cold War.  Conventional warfare platforms like tanks and destroyers were already nearing the peak of their evolution, while the jet engine and nuclear warhead had made air power the new king of the battlefield.  after all, what good was a flotilla of warships against a high-altitude bomber with single atomic bomb?
From an industrial standpoint, cancelling the Avro Arrow had the effect of permanently crippling the Canadian aerospace industry.  Not only did almost immediately put 30,000 Canadians out of work, but the subsequent "brain drain" dealt a serious blow to Canada's ability to ever reach those heights again.  The real shame here is that, with the Arrow already undergoing flight testing, the lion's share of the development costs had already been spent.
As for whether the Arrow was "obsolete" before it ever entered service...  No.
History has proven that ICBMs had little effect reducing the importance of bombers.  Instead, ICBMs form part of the "nuclear triad" along with bombers and attack submarines.  Since bombers have never been made obsolete, neither has the concept of an interceptor.  This becomes abundantly clear every time a Russian Tu-142 "Bear" decides to probe Canadian airspace.
One could cite America's decision to cancel the similar XF-108 Rapier as proof that the long-range, high-speed interceptor was an evolutionary dead end.  There are fundamental differences here, however.  For one, the XF-108 had only gone as far as the mock-up stage, while the Arrow had already seen Mach 1.9 in flight testing.  Also, the Pentagon had the (then top secret) YF-12 in development.
Perhaps the biggest argument against the Arrow being an evolutionary dead-end is the MiG-25 Foxbat.  Like the Arrow, the MiG-25 was developed as a high-speed interceptor.  Unlike the Arrow, the Foxbat would go on to enjoy a long successful service life followed by a an almost identical successor that remains a viable platform to this day.  Apparently, the Soviet Union "didn't get the memo".
To see more of why I believe the Arrow could have been a "Western MiG-25", see here. 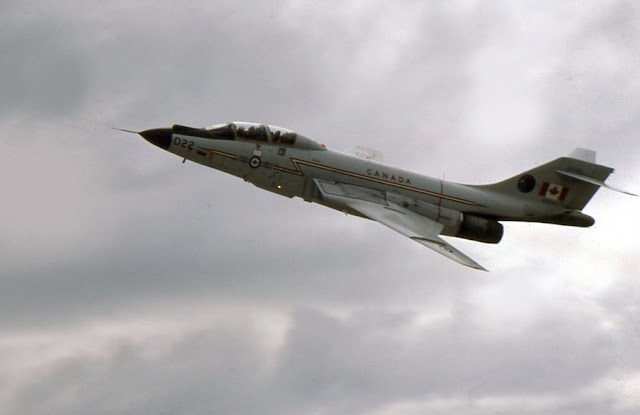 No.  No.  Hell no.
As an interceptor, the CF-101 was... Okay.  Back in the 50s, anyway.
By the time it had entered Canadian service, the Voodoo was well on its way to obsolescence.  Armed with unimpressive AIM-4 Falcons and damn-right terrifying AIR-2 Genie nuclear rockets; we can only be thankful that the CF-101 never got pressed into an actual shooting match.  This may have been a harsh reality of the early Cold War origins of this aircraft; but remember this thing was used well into the 80s.
By contrast, the CF-105 Avro Arrow was indeed ahead of its time.  Not only would it have been faster and better armed than the Voodoo, but it would have likely been far more receptive to future upgrades thanks to its larger weapon bay and Canadian control over the source material.
One can happily imagine a 70s era Arrow armed with AIM-9 Sidewinders and AIM-7 Sparrows.  Indeed, the long range AIM-54 Phoenix would have been an excellent fit for the CF-105.  Such an aircraft would have been a force to be reckoned with long into the 90s at least.  Such an aircraft could followed a similar evolutionary path as the MiG-25 did transforming into the MiG-31.  Imagine an Arrow equipped with more fuel-efficient turbofan engines, additional fuel, and increasingly sophisticated radar, avionics, and weapon systems.
With no other Western equivalent to the MiG-25, Canada could have very well seen a healthy export market for the Arrow.  While the USA and UK initially balked at Arrow in favor of their own indigenous designs, these designs never came to be.  This would lead to large, unfilled niche in the western military aerospace industry.  A niche that may have helped MiG-25 sales.
More importantly, the Arrow would have kept Canada at the forefront of aerospace industry.  Avro would likely still be very much alive, and Orenda would not have been forced into license-building pre-existing engine designs until being bought out by a conglomerate.
The selection of the F-101 Voodoo over the CF-105 Arrow can be seen as a true blow to Canada's sovereignty.  A blow from which we have never recovered and has left a painful scar that still tears open from time-to-time.   One wishes that the blow could have been softened somewhat if we ended up with a great aircraft in the end...  But the Voodoo was not it.
The argument against the Arrow was that is simply cost too much.  Indeed, the F-101 Voodoo was a far more affordable option.  Looking back, however, we can see that the opportunity cost of this decision was a far more painful price to pay.
CF-101 Voodoo Arrow Avro Arrow Hindsight 2020