Welcome to "Back to Basics"; an ongoing series in which we will attempt to "get back to basics".  Each week (or so) we will examine one crucial aspect of a fighter and how the fighters vying for Canada's FFCP compare.
While airplane nerds may obsess over how fast, how maneuverable, or how stealthy an aircraft is; no other factor matters more to an aircraft than the politics that surrounds it.  Indeed, political will has already put a stop to not one, but TWO fighter purchases intended to shore up Canada's fighter capability.
Any person reading this blog knows the story by now.  Way back in 2010, the Harper government announced the purchase of 65 Lockheed Martin F-35A Lightning II for $9 billion.  Two years later, a KPMG audit revealed that this number was hopelessly optimistic, with the actual cost being closer to $19 billion.  This, combined with concerns over JSF's troubled development, led to a "reset" of Canada's CF-18 replacement program...  With no real progress made leading up to the 2015 election.  During this election, Liberal leader Justin Trudeau promised to drop the F-35 purchase in favor of a new competition.  After a Liberal victory, the now-Trudeau led government announces a "capability gap"; stating that Canada's current fleet of CF-18 is incapable of fulfilling its both its NORAD and NATO requirements simultaneously.  This led to the announcement of a purchase of 18 Boeing Super Hornets as an "interim" fighter.  This was cancelled mere months later in the aftermath of a trade dispute between Canada's Bombardier and America's Boeing; a dispute that ended up in (checks notes) Airbus's favor.  Instead, Canada would acquire used Australian "legacy" F/A-18s.  Meanwhile, the process to replace the full fleet of CF-18s has marched slowly on; with some delays. 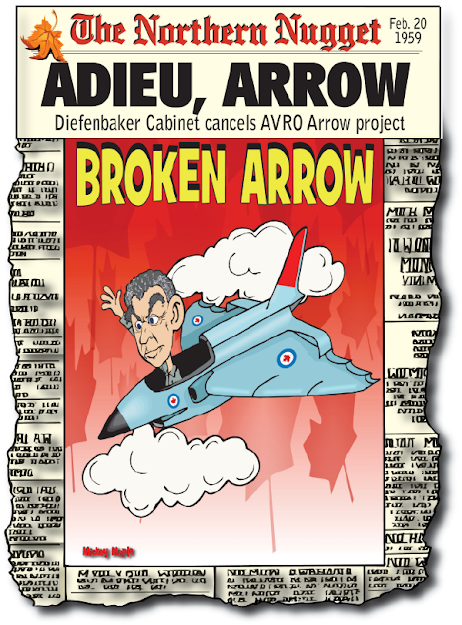 The CF-18's convoluted replacement should come as no surprise to students of Canadian military history. Looking back, it would be difficult to find a Canadian military procurement that was not marred by controversy.  Botched procurement projects seem to be part of Canada's national heritage.
Go back in time and you will encounter the infamous Sir Sam Hughes; the man responsible for equipping Canadian soldiers with the notorious Ross Rifle, the MacAdam Shield Shovel (which functioned poorly as a shield and a shovel), and boots that utilized cardboard instead of leather (aka: "Sir Sham Shoes").
Of course, we all know about the story of the Avro Arrow...  Its demise at the hands of John Diefenbaker symbolizes a dark moment in Canadian history; a time when we gave up our pride and independence in favor of becoming just another cog in the American Military Industrial Complex.
In more recent memory, we have the Chretien government's decision to cancel the purchase of the EH101 helicopter, leading to a seemingly endless Sea King replacement process.  This became a shining example of how cancelling a procurement in the interest of saving money only ends up costing more in the long run.
We also have the cringe-worthy FWSAR replacement saga that has taken forever as well as the disastrous acquisition of used British submarines.
I could go on...  But you get the point.  Any potential fighter selected by the FFCP will be at the whims of political will.
Currently, that political will is particularly precarious thanks to three major factors: 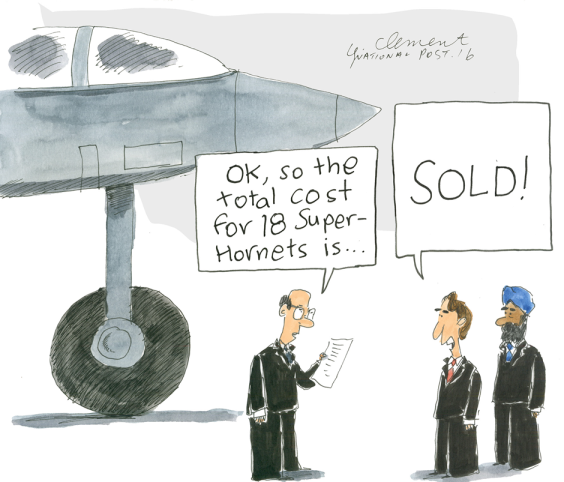 When the current Liberal government came to power in 2015, the Super Hornet was as close to a "sure thing" as it gets.  Justin Trudeau made cancelling the F-35 purchase part of his party's platform, making the Super Hornet the most probable alternative.  Shortly after, it was announced that 18 Super Hornets would be bought as an "interim" fighter to address a so-called "capability gap".  This could have been used to justify replacing the entire fleet of CF-18s with Super Hornets in the interest of "commonality".  Some might have complained about the lack of a proper competition, but most of us probably would just be happy to have the whole thing done with.  The Super Hornet would have been a safe choice.  It is an affordable, capable, and proven aircraft.
And then Boeing had snatch defeat from the jaws of victory...
Emboldened and empowered by Trump's recent election, Boeing went after long-troubled Bombardier and its new CSeries airliner.  Sensing a potential competitor to its (ultimately doomed) 737 MAX, Boeing sought to kill the newborn CSeries in its crib.  Using its small army of lawyers and lobbyists, Boeing accused Bombardier of "dumping" aircraft into the US market.  The protectionist Trump administration was happy to oblige, imposing a nearly 300% tariff on the CSeries, snuffing out its largest market.  This move has since been unanimously reversed by an independent tribunal, but by then the damage was done. Bombardier was forced to partner with, then ultimately concede ownership of the CSeries to Airbus.
This move did not go unanswered.  Canada not only cancelled the pending Super Hornet purchase on short notice, but added language to FFCP that would penalize manufacturers for any harm they have done to Canadian industry in the past.  This so-called "Boeing clause" all but disqualifies the Super Hornet moving forward.
One wonders why Boeing is even bothering to compete in the FFCP at this point.  Either they need to do it to keep up appearances, or perhaps they have something else up their sleeve. 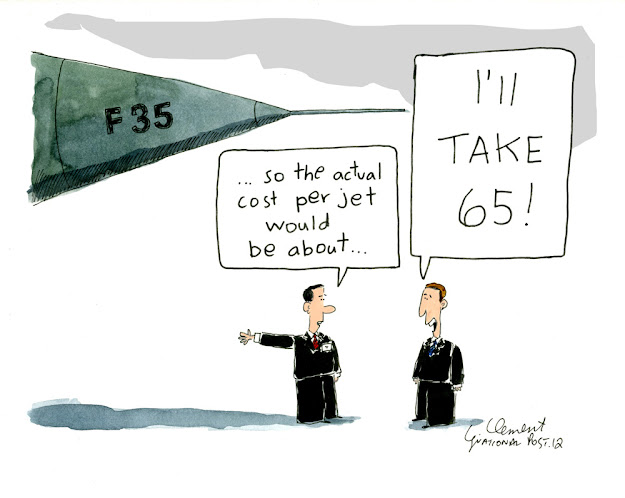 It is a strange world indeed when the F-35 Lightning II becomes a less controversial choice than the tried-and-true Super Hornet, but here we are.
What else needs to be said about the JSF?  It is still the most expensive military project ever implemented at over *Doctor Evil voice* ONE TRILLION DOLLARS.  It is still plagued with development issues, high sustainment costs, and underwhelming performance.  For Canada specifically, there are questions with how well it will fit in with our existing infrastructure, or why the RCAF needs a stealthy aircraft that places a great deal of emphasis on "first day of war" ground strike missions.
On the positive side, things have changed in favor for the F-35 since 2015.  Most notably, Boeing sabotaging its chances with Canada has left the F-35 as the most likely American offering.  This only increases the already massive lobbying effort behind it.  The JSF has substantial momentum behind it, with Canada already spending hundreds of millions to sustain its status as a "Level 3" partner in the JSF development program.  This allows Canadian business to bid on F-35 contracts, even if we do not eventually buy the aircraft.
Despite its troubled past, the F-35 Lightning II has made substantial progress in the last few years.  It has hit several important milestones, not the least of which is being declare operational and seeing active service.  The F-35 is no longer "the fighter of the future" it is "the fighter of the present".
The current Liberal government could justify the ultimate selection of the F-35 as simply a "re-evaluation" of the fighter after five years of changes in its favor.  If defeated through a non-confidence vote, potential Conservative government would likely stick with the F-35 as its preferred choice, especially with Peter MacKay at the helm. 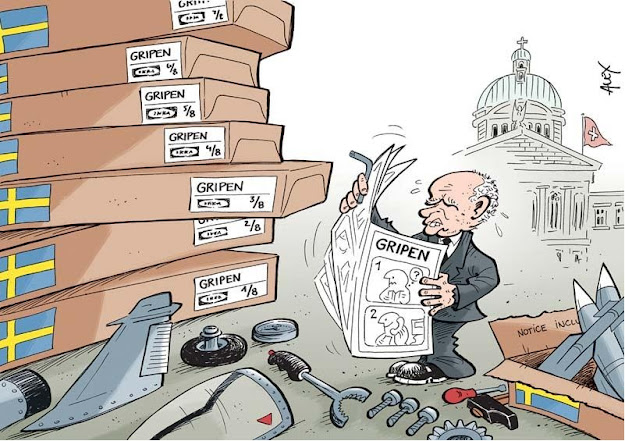 When I started this blog many years ago, I never would have thought that Saab would have a political advantage over its rivals.  Canadian-Swedish relations are fine, but nowhere near as close as Canada and the USA.  The Canadian military does not have a lot of Scandinavian equipment in its inventory, certainly nothing as high profile as a fighter jet.
Circumstances changed however.  Almost always in the favor for the Saab Gripen.  The F-35's troubled history encouraged a second look at its competition.  Boeing's aggressive trade actions dropped its status from front-runner to an also-ran.  Meanwhile, Saab has kept a low profile, slowly plugging away at testing and improving its Gripen E.  It has also placed emphasis on its low operating cost and ease of maintenance, especially when its capability is taken into account.
Then Saab slapped down its "ace in the hole"...  As part of its bid, Saab has offered to build the Gripen in Canada.
A "made in Canada" solution brings back a certain national pride.  Canada has not made its own fighters since the CF-116 (CF-5) Freedom Fighter and there is still hurt feelings over the Avro Arrow's fate.  Some would applaud the opportunity to "stick it to the Americans" and their military industrial complex, especially in a post-Trump world.
There is more than national pride however.  Building Canadian fighters in Canada would see more Canadian tax dollars used to employ Canadian workers, thereby keeping more money in Canada.  This may seem nationalistic, but there will be serious unemployment issues and high government debt moving forward from the Coronavirus pandemic.  Speaking of which, Sweden did not exactly hit its Coronavirus strategy out of the park...  But America's response has been nothing short of disastrous.  Indeed, America's very stability in the short term could be questioned, what with some are calling "Civil War II:  Electric Boogaloo" on the horizon.
At this point, the Gripen may be the only fighter on the table that doesn't have tonne of political baggage to carry with it.  That, plus the promise of Canadian fighters being built in Canada, make it a clear political winner...  For now.
Given the speed in which things can happen in politics, this could change at a moment's notice. 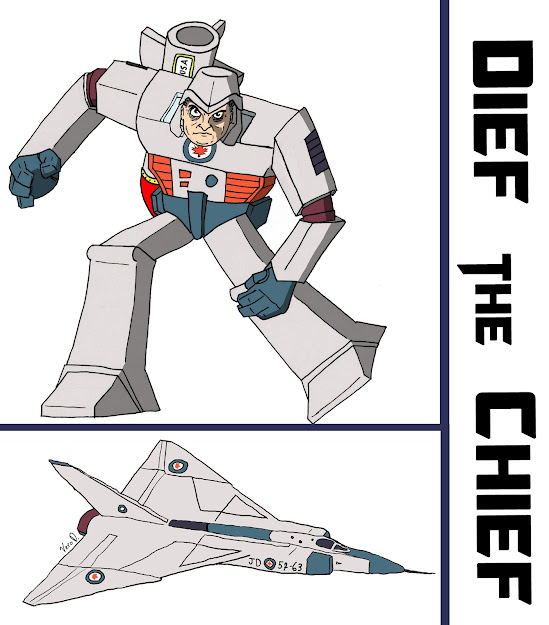 This concludes by "Back to Basics" series.  I hope you enjoyed it.  I'll be taking it easy for the rest of the summer.  I'll pop in from time to time to weigh in on any major news if I can.  Hopefully things will start picking up momentum in the fall and we will finally see a new fighter selected!
Back to Basics