BACK TO BASICS: LOGISTICS

June 17, 2020
Welcome to "Back to Basics"; an ongoing series in which we will attempt to "get back to basics".  Each week (or so) we will examine one crucial aspect of a fighter and how the fighters vying for Canada's FFCP compare.

"An army marches on its stomach"

A rifle is of little use without bullets.  A tank will not go far without fuel.  An aircraft that cannot leave its hangar becomes little more than an expensive lump.  A modern military force is far more than a collection of separate parts, it is a complex machine that depends on how well those parts work together.

There is is tendency to look upon fighter aircraft as separate entities in their own little world.  We assume that they will have access to all the fuel, facilities, and ammunition they need.  This is not always the case.  Pristine, fully equipped airbases will not always be available.  This is especially true for the RCAF, which spends a good part of its time supporting NATO missions overseas or utilizing Forward Operating Locations in Canada's arctic.

In the grand scheme of things, a fighter jet is just another cog in the military machine.  In order to be effective, it must be available, in good working condition, and provided with the proper infrastructure to keep it that way.  This means proper airbases, hangars, supply chains, and caches of spare parts.  It also needs the proper people with the proper training to keep that logistic machine moving.

Of course, a proper logistic chain does not simply materialize overnight.  It is built up over time and fine-tuned constantly.  That is the case with the RCAF's CF-18 deployment structure.  It consists of two full time bases at Cold Lake, Alberta and Bagotville, Quebec.  CF-18 squadrons at these two bases regularly rotate to Comox, Gander, Goose Bay, and Greenwood.  They also regularly operate out of Canada's Forward Operating Locations (FOLs) in Yellowknife, Rankin Inlet, Iqaluit, and Inuvik.  It should be noted that these FOLs are not proper military airbases, they are shared with civilians.
For the sake of our comparison here, we shall evaluate how well each of the contenders for Canada's FFCP fit into the the existing CF-18 infrastructure.
No doubt about it, the F-35 would be a challenge fitting into the RCAF's current infrastructure.  Optimized for life in the USAF, the F-35A would be a the proverbial square peg into a round hole.
It is true that one of the design goals of the F-35 was to improve on the maintainability of its predecessors, but so far it has fell far short of that goal.  There are doubts that it ever will.  Well-documented issues with its Autonomic Logistic Information System (ALIS) have stymied the aircraft for years.  It radar absorbent material (RAM) skin is proving not to be as rugged as intended, seeing problems with afterburner use or firing the cannon.
These issues can be dismissed as being limited to early versions of the aircraft.  Unfortunately, some aspects of the JSF's are more "built in" as part of its very design.
While the F-35 does have the advantage of being the only stealth fighter on offer, it carries with it all of the disadvantages as well.  Stealth aircraft require extra care when it comes to maintenance, as any blemish can have a detrimental effect.  Previous stealth aircraft have had issues with simple bad weather, requiring climate controlled hangars.  The F-35 has mitigated this somewhat, but still has a bit of a reputation as a "hangar queen".
As I have stated before, the F-35 needs LOTS of runway.  An optional drag chute mitigates this issue somewhat, but is not without its own issues.
There is also the well-known issue surrounding the F-35A's aerial refueling system.  Built for the USAF's "flying boom" method of aerial refueling, it is incompatible with Canada's current tanker fleet.  For those who think we could get by using American tankers...  I got bad news for you.
What the F-35 does have in its favor is that it will be the preeminent NATO fighter for the next few decades.  Part supplies should be easily available, with all the benefits of widespread commonality on a global scale. 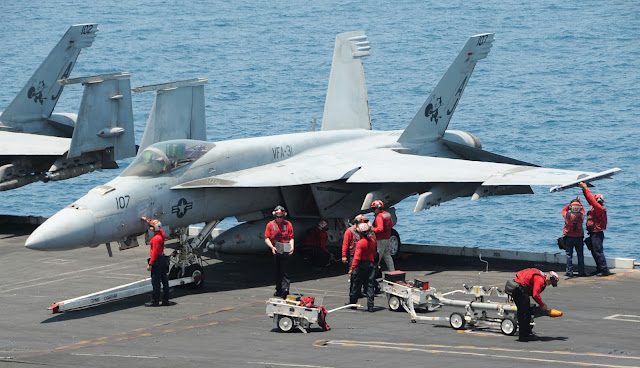 Compared to the F-35, the F/A-18E/F Super Hornet would be virtually "plug-and-play" to incorporate into the RCAF.  This is no surprise, as the "Rhino" was designed with the intent of utilizing existing legacy Hornet infrastructure.  The Super Hornet takes this even further by sharing some common parts with its smaller, older sibling; all while being even simpler to maintain.
Indeed, it is this very commonality with the CF-18 that led to Canada sole-sourcing the Super Hornet as an "interim fighter" several years ago.  If not for a trade dispute, we would likely have them in the inventory now.
The ease in which the Super Hornet could slot into Canada's existing infrastructure is arguably its strongest selling point.  Short-term, it would certainly have an advantage over the other two fighters.  Everything from training to supply chain management would require little more than some simple "tweaking".  There is a very good reason why Boeing has offered the Super Hornet instead of a modernized F-15 Eagle.  Even though the Eagle is more capable aircraft, it would require a great deal more effort to incorporate into the RCAF.
Being a carrier-capable fighter with a reputation for ruggedness certainly puts things in the Super Hornet's favor as well.  Other than having a slightly larger footprint, it can operate in pretty much the same manner as the legacy CF-18. 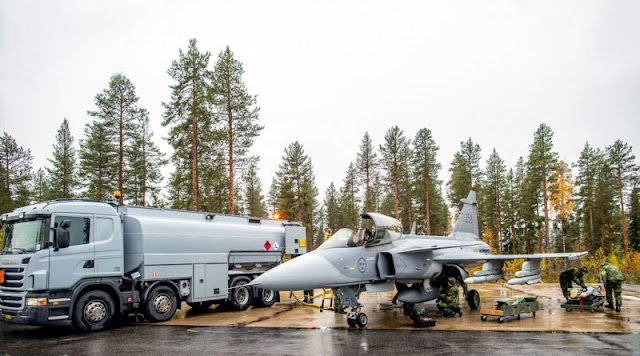 In the software industry, there is a term called "killer-app".  This term is used when a single application justifies an entire hardware platform.  Examples include VisiCalc on the Apple II computer or HALO: Combat Evolved on the original XBox.  In a broader sense, it can explain how a singular feature can decide a buying decision.  Examples here would be explaining Nintendo's unique Wii and Switch consoles sell faster than their technically superior competition; accessibility and portability, respectively.
For the Saab Gripen, logistics is its "killer-app".
Unlike other fighter designs that look at maintainability as an afterthought, development of the Gripen focused on it as a major design goal.  Developed at the end of the Cold War, the Gripen needed to fit into Sweden's defence strategy.  Since it could do little against a much larger (presumedly Soviet) force in the early days of an invasion, it assumed quickly losing control of its airbases and other installations.  Sweden's military was designed around this assumption, being able to quickly disperse throughout the country and operate from ad hoc bases constantly changing locations.  Imagine guerrilla warfare, but with supersonic fighters and tanks instead of IEDs and suicide bombers.  Parking garages would become tank depots, and highways would become airstrips.  Swedish military doctrine focused on making occupation as miserable as possible for any invading force, thereby deterring invasion in the first place.
The Gripen epitomizes Swedish defence doctrine.  Instead of requiring a fully stocked airbase, all it needs is 800m of straight road, a truck, six technicians, and ten minutes to refuel and rearm.   Operating from Canada's arctic FOLs would be a non-issue.  This is true for foreign deployments as well, with a single C-130 Hercules able to support the deployment of ten Gripens for four weeks.
While the Gripen's smaller size does reduce its maximum payload, it also reduces the fuel needed as well as making it generally easier to work on.  Indeed, much of the Gripen's major components can be accessed without special equipment using simple hand tools.  All of this contributes to the Gripen's incredibly low operating cost, coming it at a fraction of the other FFCP contenders.
Superficially, the Gripen could be criticized for being more a "boutique" fighter compared to the more common F-35 and Super Hornet, leading to less parts availability.  This is minor issue, however, as the Gripen is fully compatible with NATO standards and weapons.  Saab also stands alone in the FFCP contenders in that it is willing to provide full technology transfer, allowing Canada to make its own spare parts.  It even shares the same engine with the Super Hornet.
While the Super Hornet would initially be easier to incorporate into the RCAF, the Gripen easily beats it in the long run.  Not only that, but its small logistic footprint opens up a world of additional possibilities when it comes to deploying domestically and abroad.
Back to Basics