WHAT NOW FOR THE SNOWBIRDS? 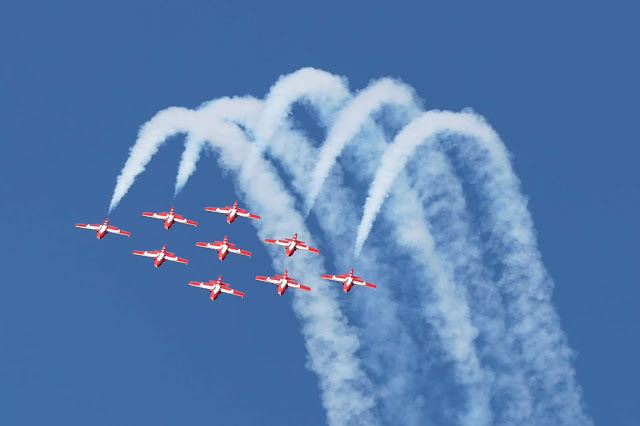 I'm going to take a break from my "BACK TO BASICS" series to address the recent tragedy that occurred during the Snowbird's "OPERATION INSPIRATION".

As I write this, Captain Jennifer Casey will be returning home to a solemn ceremony celebrating her years of service and ultimate sacrifice.  A sad occurrence, especially for the province of Nova Scotia, which is still reeling from the recent loss of a the crew of a crashed CH-148 Cyclone and the worst mass shooting/murder in Canadian history.

A sad time indeed.  One can only take small comfort in the fact that Capt. Casey gave her life bringing much needed hope and inspiration to others in a time of global melancholy.  It is truly a grim irony that "OPERATION INSPIRATION" ended in such a tragedy.

It is a hard blow to the Snowbirds team, the RCAF, and Canada as a whole.

The question now is "What next?"

The Snowbirds themselves seem to be grounded for the immediate future pending an investigation into the crash.  With multiple air shows being cancelled or put on hold during the Coronavirus pandemic, there is a very good chance that the 2020 season is over.

This is not the first time the Snowbirds has had to deal with such tragedy.  Hopefully it does not mean an end to the Squadron and its mission.

As for what happens in the long term, that will be likely determined by whatever findings come from the crash investigation.  There is no denying the fact that the CT-114 Tutor is an ancient aircraft.  First flown in 1960, the Tutor was retired from its training mission twenty years ago.  One could be excused for wondering why such an aircraft would still be used in the high-demand roll of acrobatic team.

It should be noted, however, that the Tutor IS an exceptional little plane.  It is surprisingly robust for its small size and loved by all of its pilots.  The models used for the Snowbirds are meticulously maintained, effectively being torn down and rebuilt after every few hundred flight hours.  Surprisingly, spare parts are plentiful.  Its retirement from the training role resulted in the availability of dozens of airframes from which parts could be cannibalized.

To give an idea as to how good the CT-114 Tutor is, when former Snowbird team leader Lt. Col Robert "Scratch" Mitchell was asked his choice to replace it given an unlimited budget; his choice was simply to build a modernized version of the Tutor with "wet wings", new engine, and new avionics.

Unfortunately, a modernized Tutor seems unlikely.  While it most likely could be done, making an economic case would be almost untenable.  Such major changes would result in almost an entirely new aircraft requiring its own flight testing and certification.  That is a lot of effort for only a handful of planes to fulfill a niche role.

The most likely option would be to replace the Tutor with an all-new aircraft.  I have examined the potential candidates before, and the choices remain pretty much the same:

This is where the first hard decision needs to be made.  Part of what makes the Snowbirds unique is that its roster is not solely made up of fighters pilots.  Choosing to replace the Tutor with a faster, more powerful aircraft like the Hawk would make the Snowbirds far less inclusive.


Some might see replacing the jet-powered Tutor with a prop-powered Harvard II as a bit of a downgrade.  It is not as big of a downgrade as some might think, however.  While certainly slower than the Tutor, the Harvard II is capable of an impressive +7.0g turns.  It is also used by the Isreali Air Force (IAF) for its acrobatic team, which formerly flew jets.

Switching to a turboprop aircraft would rob the Snowbirds of some of their repertoire, but the Snowbirds have always been know for their grace and precision more than raw, visceral power...  They leave that for the Blue Angels and Thunderbirds
.

Speaking of the American teams, it will not be long before both of them will be replacing their aircraft as well.

As we speak, the USN's Blue Angels are transitioning from he legacy F/A-18 to the newer Super Hornet.  In most ways, this is an upgrade, but the smaller legacy Hornet does have advantages when it comes to acrobatic performance.  The smaller, lighter fighter has superior maneuverability compared to its newer brother.

As for the USAF's Thunderbirds, they will soon be tasked with replacing their aging F-16s.  While the F-35 may be replacing F-16s as the USAF's "workhorse" fighter, it seems uncertain that it will replace it in Thunderbird duty.  Not only does the F-35 lack some of the F-16's legendary "zip", but it requires a great deal more logistic support...  Never mind the security concerns of utilizing a stealth platform in a public relations setting.

A far more likely option for the USAF would be to utilize the new T-7 Red Hawk trainer aircraft.  Like the CT-156 replacing the CT-114, it could be seen as a bit of a "downgrade" replacing the F-16 with a less powerful aircraft, but not without precedent.  The Thunderbirds "downgraded" to the F-100D Super Saber after realizing the F-105 was a poorly suited for acrobatics.  They would later downgrade from the F-4 Phantom to the T-38 Talon during the 1970s gas crises (5 T-38s using the same fuel as a single F-4).


What makes the T-7 Red Hawk particularly interesting is that it would be in the running to replace Canada's existing fleet of CT-155s.  That means it could potentially replace both the Thunderbirds' F-16 and the Snowbirds' Tutor.  Given the emphasis placed on price/performance ratio of the T-7, along with its potential sales numbers and economies of scale, it is not an unrealistic prospect.

Then again, the USAF may simply decide to practice its typical largesse and utilize new-build F-15EXs in the Thunderbird role... Fulfilling a life-long dream for some.

For us, what really makes the CT-114 Tutor special is the fact that it was both designed and built in Canada.  It harkens back to a time in Canadian history when we believed, nay, knew that we could stand with the best of world's aerospace industry.  While the Avro Arrow failed to meet up with its lofty expectations, the humble Tutor has soldiered on for sixty years as a Canadian icon.

Saying goodbye to that icon will not be easy.

Saying goodbye to a true Canadian hero is a lot harder.