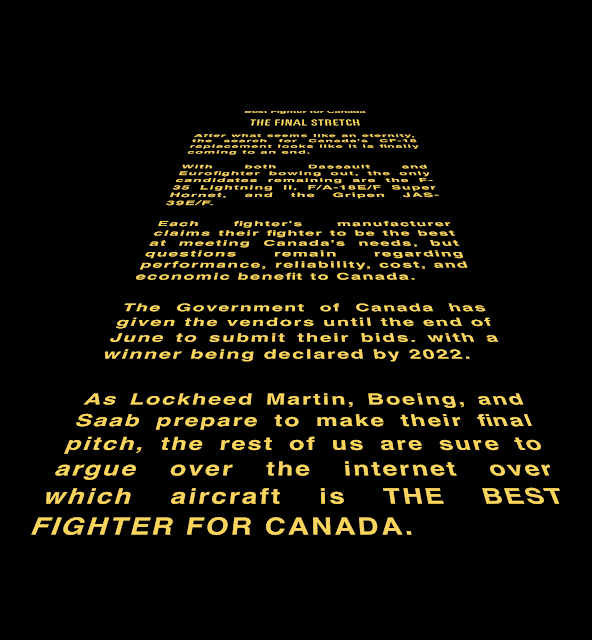 [Note:  I apologize for my recent absence here.  I was resting up in preparation for the next two years, which will likely be a tumultuous time.  Moving forward, I will attempt bi-weekly updates at the bare minimum.  I may also attempt a few format changes (shorter posts more often, more opinion pieces, etc.]

This may come as a surprise to some, but Canada has still not selected a fighter to replace the aging CF-18.   The good news, however, is that we are getting closer.  Better still, the winning fighter design will not be decided by default, as Saab and Boeing are still very much in the running.

Before we go into detail about that, let us first pour one out for the departed Eurofighter Typhoon and Dassault Rafale.  Both of these fighters' manufacturers decided that they did not want to play a game they could not win.

Recently, the Government of Canada extended the deadline for proposals an extra three months.  Bidders now have until the end of June instead of the end of this month.  While  this may be frustrating to those of us who feel like the process has been hit with too many delays already; that extra three months may mean the difference between a three-way race and a two-way race.

At least now we have a general idea of what each manufacturer is offering to sweeten the pot... 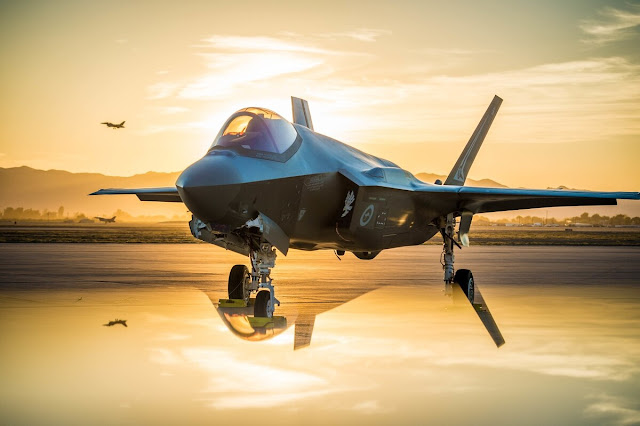 Remember when the F-35 was still going through a troubled teething process and plagued with unreliability?  Thankfully, those days are over.  Well...  Sort of...  Maybe...

During recent evaluations for Finland's HX fighter program, the request was made for FOUR F-35s to participate.  Of those four, only two showed up.  Of those two, only one was able to participate all flight evaluations.  This, despite having two C-17s worth of support on hand.  Yikes.

Lockheed Martin's bid has not changed.  As per the usual JSF framework, partner nations are not guaranteed any offsets to go with their purchase.  Instead, Canada will keep its ability to bid on current and future JSF-related work.  This does have the potential of a high return on investment, as the worldwide F-35 fleet will number into the thousands.  In essence, Canada will be able to fight over a small slice of a very large pie.  Canada's expertise in the aerospace sector as well as Turkey's recent banishment from the program could end up being lucrative...  But there are no guarantees. 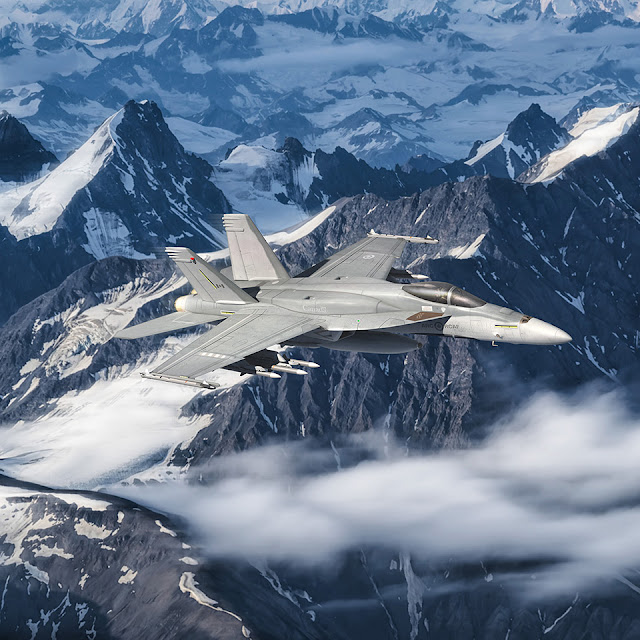 One could be forgiven for assuming that Boeing's F/A-18E/F Super Hornet was bound to replace the CF-18 the moment the Liberals assumed office back in 2015.  The Trudeau Government even went so far as to announce a purchase of 18 "interim" Super Hornets to tide the RCAF over until a more permanent replacement was found.

That was, of course, just before Boeing decided to use its considerable influence to squash Canada's own Bombardier.  Doing so, Boeing wrecked Canada's commercial aerospace sector, leading to soiled relations with the Canadian government and scuttling the Super Hornet sale.  The only winner in the Boeing/Bombardier dispute ended up being Airbus, which ended up buying out Bombardier's entire commercial aircraft portfolio.

Despite the bad blood, Boeing still believes its Super Hornet is the most suitable replacement for the CF-18.  They have good reason to.  In its Block III form, the Super Hornet promises a robust, proven airframe with all the latest technology.  Boeing has also promised $30 billion worth of industrial offsets.

Whether Boeing's offer makes up for past misdeeds remains to be seen. 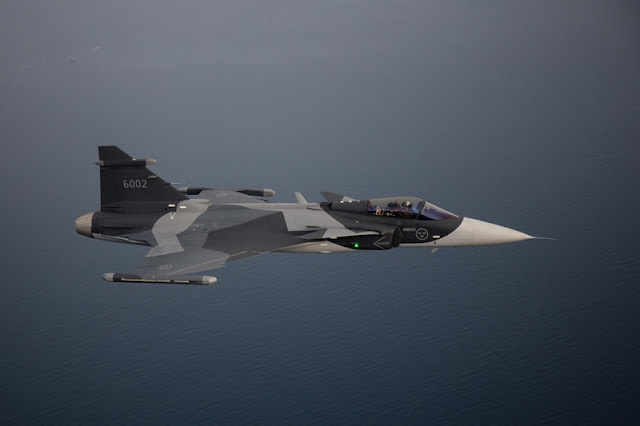 Full disclosure:  When I first started this blog's forerunner many years ago, the very idea of a Canadian Gripen was almost unthinkable.  The F-35 deal was all but finalized.  Even when the JSF purchase was cancelled in favor of an open competition, the Gripen was still considered little more than an "also ran".  What else could it be when compared against heavyweights like Lockheed Martin, Boeing, Airbus, and even Dassault?

What a difference a decade makes.

Saab's dark horse may very well end up with an upset in Canada's fighter competition.  It has outlasted the two other "eurocanards" (Rafale and Typhoon) to end up toe-to-toe with two American giants.  The sales strategy is simple:  Offer most of the technical and performance capabilities of the other fighters in a smaller, cheaper, simpler (ie: non-stealth) package.

Saab understands that building what some would  call a "discount" fighter is not enough, however.  Much like it has done with Brazil, Saab has committed to building Canadian Gripens in Canada.  This offer sets Saab apart from its American competition and certainly sets it apart from the two American firms.

Needless to say, a deal like this has a lot of moving parts.  This is complicated by the fact that the Gripen E/F has yet to finish its full development cycle.  Remember that three-month extension?  Chances are it was Saab that requested it. 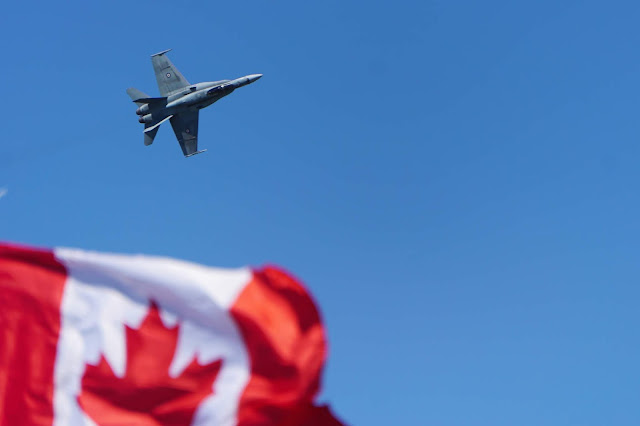 In the coming weeks, I hope to take a closer look at what each manufacturer is offering Canada.  The time for promises and vague assurances are over.  The three vendors will now have to make their respective offers in writing with actually dollar figures attached.

Other questions need to be answered as well.