As per the Canadian government's criteria:


"Proposals will be rigorously assessed on elements of cost, technical requirements and economic benefits. The evaluation will also include an assessment of bidders’ impact on Canada’s economic interests."

Saab has to compete on price, performance/technology, and politics (ie job creation).

Price should be a non-issue.  The Gripen, even in its most advanced "E" variant, is notoriously inexpensive when compared to other fighter jets.  Even considering the additional requirements to make the aircraft suitable for NORAD operations, Saab should be able to keep the unit cost down to an acceptable level.  After all, they were able to sell 36 Gripen Es to Brazil for less than the 18 Super Hornets Canada was going to buy.  (These kind of deals are difficult to compare given the different specifics).  Even if the Gripen had an identical unit cost to the JSF or Super Hornet, it would still enjoy a huge advantage when it comes to operating costs.

Altogether, the Saab Gripen would present itself as the "Value" proposition.  Its almost a shoe-in when it comes to competing on cost.

Performance is another matter.  While the Gripen is no slouch (especially the Gripen E), being a smaller, single-engine fighter does have its limits.  While quicker and more maneuverable than the other two when carrying a light load, this changes considerably when additional payload is added.  A few precision bombs would not be a problem, but those looking for a heavy bomber should look elsewhere.

Technology-wise, the Gripen E slots right between the two Americans.  It has a similar radar (possibly better) to the Super Hornet and enjoys an integrated (rather than tacked-on) IRST sensor.  Both aircraft feature an advanced cockpit.  The Gripen does lack both the stealth and some of the more bleeding edge tech found in the F-35.  It makes up for this somewhat with being the only aircraft in the FFCP capable of utilizing the MBDA Meteor as well as some interesting electronic warfare options.

The Gripen E would surely be "good enough" performance-wise, but how well it stacks up to the other two will really depend on selection criteria.

As far "economic interests" are concerned...  This is where things get interesting.  Once again, Saab's size is a factor.  While Boeing and Lockheed are beholden to their massive assembly plants in St. Louis and Fort Worth, Saab has the option to build Canadian fighters in Canada.  This seems like a "slam dunk" but it is not so easy.  Saab would have to come up with a detailed business plan on how it would do this.  It would likely involve a Canadian aerospace company, much like Saab partnered with Embraer in Brazil.  Saab already has a partnership with Bombardier, utilizing the Global 6000 business jet in several of its offerings.  The last fighter built in Canada was the CF-5(116) Freedom Fighter built by Canadair (before privatization and amalgamation with Bombardier).  Despite this, there is still the possibility that Bombardier might not have the capability, or the will, to build a supersonic jet fighter.  There is still the possibility of partnering with another Canadian aerospace firm (like IMP Group) but Bombardier would likely be the first, possibly only choice. 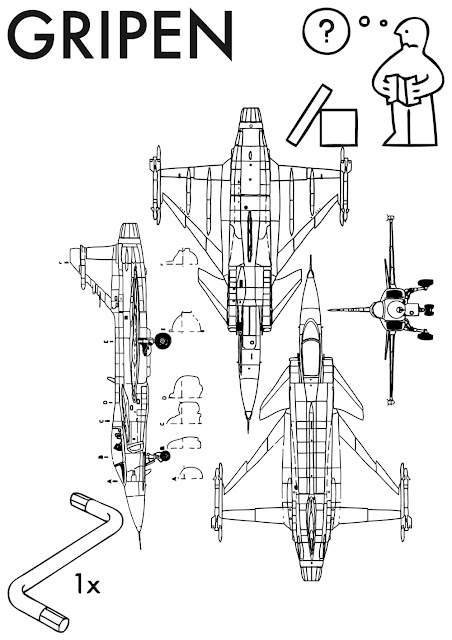 Even after all this, Saab must make sure its proposal meets all security, performance, training, and cost criteria.    A Request for Proposal (RFP) is far more than a "How much for this many fighters?", it is an entire business case that needs to stand up to a third-party audit and similar due diligence.  The cost of even participating in Canada's FFCP is significant for a manufacturer like Saab, but the reward (88 fighters and a conquest over the JSF) is difficult to ignore.

One might think that the idea of the smaller Gripen beating out the two Americans is still nearly impossible, but so was the selection of Airbus's C295 over the C-27J and KC-390 for Canada's FWSAR.  The C295 won based primarily on pricing, a trend that will likely continue for a cash-strapped Canadian Forces.

The fact that Saab has made it this long is to be commended.  The Gripen is a clear underdog in a field that includes the F-35 and Super Hornet; both fighters that, at one point, were just a few signatures away from becoming Canada's next fighter aircraft.  Five years ago, the idea of a Canadian Gripen seemed nearly impossible.  Now, one could argue that Saab has a better chance than even Boeing.

If Saab can secure Canadian manufacturing capability, and if the Gripen E lives up to its promise of 5th Generation capability at a 4th Generation price...  They might just pull this off.
Bombardier Gripen Gripen E Saab