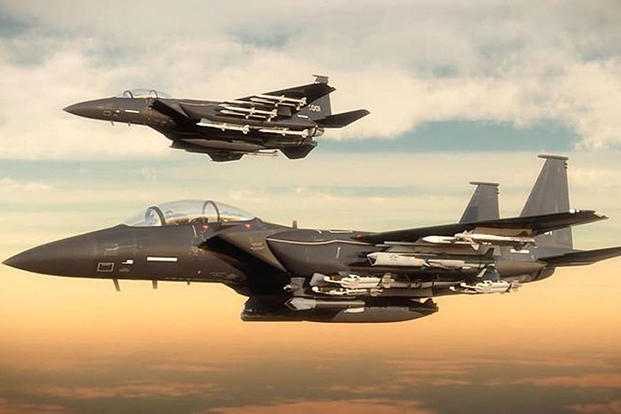 For years, the Pentagon and the USAF have extolled the virtues of the F-35 Lightning II.  The message has been very clear:  Fourth-generation fighters are now obsolete, no matter how good they may have been in the past.  The JSF is a complete game-changer, a paradigm shift in air combat.  Whatever the mission, the F-35 is superior.

While the USAF will not come out and say it, it is clear that they are they are not as enamored with the F-35 as the public relations material would suggest.  Earlier this month, the USAF proposed to cut F-35 orders down to 78 from 84.

This certainly pokes a AMRAAM-sized hole in the press material that states that the JSF is superior to fourth-generation aircraft in both capability and price.  Why would the USAF demand updated F-15s if that was the case?

The Pentagon has justified the action as a way to preserve the "industrial base".  It makes strategic and economic sense to ensure that Lockheed Martin is not America's sole fighter manufacturer.  There is also the not-so-coincidental fact that Boeing has found itself in a bit of a financial pickle lately.  A big fighter jet order might help alleviate some of the damage done to Boeing's stock price following the 737 MAX scandal.


Make no mistake, however.  There is more to the F-15EX order than just trying to maintain an industrial base.  Thanks to its Saab-assisted win in the T-X competition, it is already guaranteed to be making fighter trainers for decades to come, as well as making the inevitable light-fighter spinoff to the T-X.  International sales of the F-15 platform remain steady, even without the USAF's orders.  Super Hornet/Growler production is safe for a few more years as well.

The USAF's sudden interest in an updated F-15 is not so much about maintaining an industrial base as it is about capability.  Simply put, the old warhorse F-15 can do some things better than the F-35 wunderkind...  And some things the F-35 cannot do at all.

For all of its advances, the F-35 has to obey the laws of physics.  It is a large, bulky aircraft that has many compromises built into its "jack-of-all-trades" stealth design.  By contrast, the F-15 was developed with a singular focus of air-superiority.  That not only means speed and agility, but lots of range and payload as well.  That requires a robust airframe, a feature that would later make for a great strike variant. 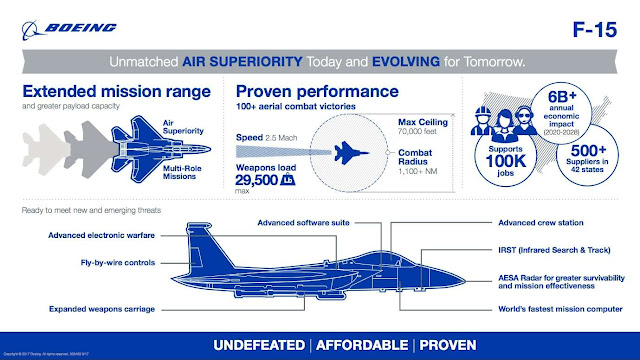 Not constrained by weapon bays, the F-15EX does not have to worry about cramming future weapon systems into its fuselage, just a external pylon.  This makes adding future weapons a much easier process.  This is not inconsequential given the recent interest in hypersonic stand-off missiles.

The F-15EX has the additional advantage of requiring little additional infrastructure or training.  This will help keep operational costs down.

In the end, the decision to trade F-35s for new F-15s may have been the USAF's only viable option.

The F-35 is far from the roaring success it was intended to be.  The idea of it replacing almost every fighter in the NATO arsenal seems laughable at this point.  Its operating cost is still a staggering $35,000 per hour, substantially more than aging F-15Cs and F-15Es, let alone the much cheaper F-16 that the JSF was intended to replace.  Unfortunately, the USAF is in desperate need of new fighters.  Any potential sixth-generation fighter is likely decades away.

That does not leave the USAF with many options.

It could order some Super Hornets...  An unattractive option given the rivalry between the USAF and the USN.

It could order some updated F-16Vs; the cheapest option by far...  But this would simply swap out one Lockheed Martin product for another, making the "industrial base" excuse non-usable.

It could order a foreign-made aircraft...  A political impossibility given it would deny jobs to "hard workin' 'Muricans" and imply that the USA does not necessarily build the "best damn aircraft in the world".

Or it could order a fighter that first flew almost 50 years ago.  Mind you, that fighter has a reputation for being one of the best fighter aircraft of all time with a perfect combat record.  The USAF and many other air forces have come to know and love the F-15 Eagle and have no real compelling reason to part with them any time soon.  With a few updates one could easily see the F-15 being a force to be reckoned with for decades to come.

For the USAF, the decision is clear:  If it ain't broke, don't fix it.