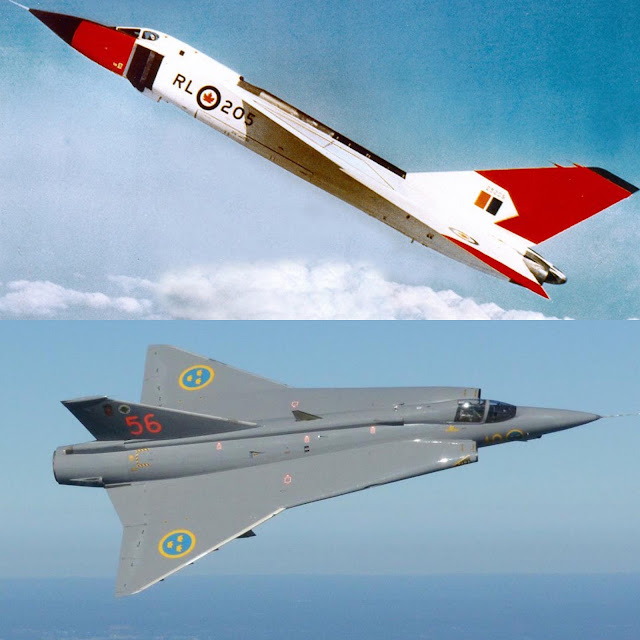 In 1959, the Avro Arrow was canceled by then-Prime Minister John Diefenbaker.  After sixty years, many still view the decision with disgust.  For them, the Avro Arrow was more than an interceptor; it was the embodiment of Canadian pride.  The Arrow was proof that the Canadian aerospace was on par, if not superior to, anything else in the world.

In retrospect, those people were right.

The Arrow was Canada's last serious effort to design its own fighter jet.  Not only that, Canada has pretty much given up designing any military aircraft since then.  The CP-107 Argus ASW aircraft, developed alongside the Arrow, failed to justify a Canadian successor after   The far less ambitious DHC-4 Caribou's lineage died after the DHC-5 Caribou.

While Canada still maintains a robust aerospace industry, it is dwarfed by the American and European giants.  Our largest indigenous aerospace manufacturer, Bombardier specializes in small regional airliners and business jets.  While this is nothing to scoff at, it is a far cry from building supersonic interceptors. 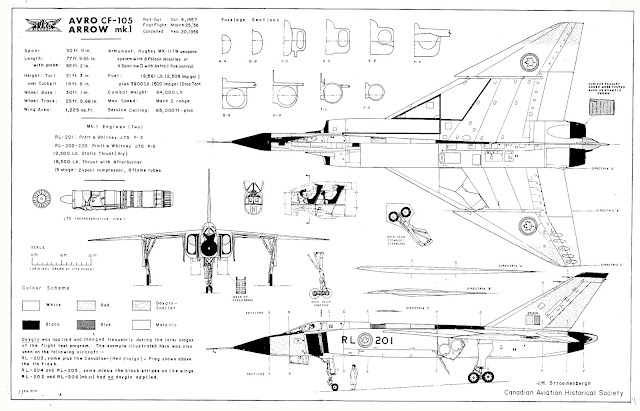 We all know the the story behind the Avro Arrow.  It was a commendable effort, but in the end it was deemed too costly.  Not only that, but its very concept was in doubt.  Similar aircraft, like the North American XF-108 Rapier and British F.155 shared similar fates despite originating in nations with much larger military budgets.

No...  There was no conspiracy to kill the Arrow because it was "too good".  Nor is it worth resurrecting it as a CF-18 replacement.  Stop that.

The CF-105 Avro Arrow was ultimately a victim of its own ambition.

It was intended from the outset to be one of the largest, most powerful, and fastest fighter aircraft of its day.  This in and of itself made for a budget challenge.  Larger aircraft need larger engines to compensate for the increased weight and drag.  Larger engines need more fuel, which requires a larger aircraft still.  Needless to say, larger aircraft simply cost more.  They require more raw materials, more labour to build, and more fuel to fly.

Alongside the sheer size of the aircraft, the Arrow relied on technology that simply did not exist yet.  Its massive control surfaces required a fly-by-wire system, something unheard of at the time.  Jet engine of the time were not yet powerful enough for the massive airplane so a new engine, the Orenda Iroquois, needed to be developed.

There was also a question regarding the Arrow's weapon systems.  Originally intended was the Canadair "Velvet Glove" radar-guided missile, but these were cancelled over concerns that the missile could not be launched at supersonic speeds.  This led to the decision to incorporate the American Sparrow II that was under development at the time.  Unfortunately, the Sparrow II suffered a similar fate when its active radar guidance was found lacking.  The only remaining option was the incredibly underwhelming AIM-4 Falcon missile.  Shorter range (but much more accurate) IR guided missiles could not be mounted in the Arrow's internal weapons bay.

Simply put, the Avro Arrow was an incredibly expensive fighter that was dependent on multiple technologies that simply did not exist at the time. 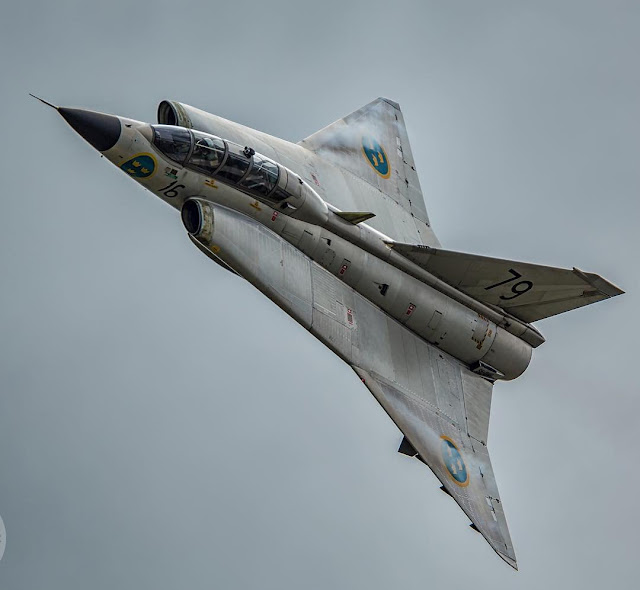 The Avro Arrow shares many similarities with another the jet interceptor, the Saab 35 Draken (Dragon).  Like the Arrow, the Draken was developed as a supersonic delta-wing interceptor by a nation with a modest defence budget.  Unlike the Arrow, the Draken made it to production.  Not only that, but it managed to secure a few export sales.  Its success has carried on to the Saab 37 Viggen and Saab JAS 39 Gripen.

So why did the Draken succeed where the Arrow failed?

The Draken was a much less ambitious aircraft.  Instead of huge twin-engined aircraft capable if Mach 2+, the Draken's speed requirement was a modest Mach 1.7.  Its defining characteristic was that it could operate from public roads and improvised air bases.

Apart from its ground-breaking "double-delta" wing design, the Draken was a fairly conventional design.  It was closer in size to smaller interceptors like the F-104 Starfighter or F-106 Delta Dart.  With a MTOW (maximum takeoff weight) of 12 tonnes it was less than half the Arrow's size.  This meant the Draken could get by using a single engine instead of two.  Better still, and unlike the Arrow, the Draken utilized a current design, the Rolls-Royce Avon.  This engine, produced under license as the Volvo Flygmotor RM6C, would later see improvements that would take the Draken to Mach 2.  The Arrow, which never got its Iroquois engine, never made it past Mach 1.98.

The Draken's weapon systems were also much simpler.  Instead of relying on internal weapon carriage, the Draken used simple pylons.  This allowed it to mount much the much more accurate IR-guided AIM-9 Sidewinder as well as the crude radar guided AIM-4 Falcons of the time.  If all else failed, the Draken still carried up to two 30mm cannons. 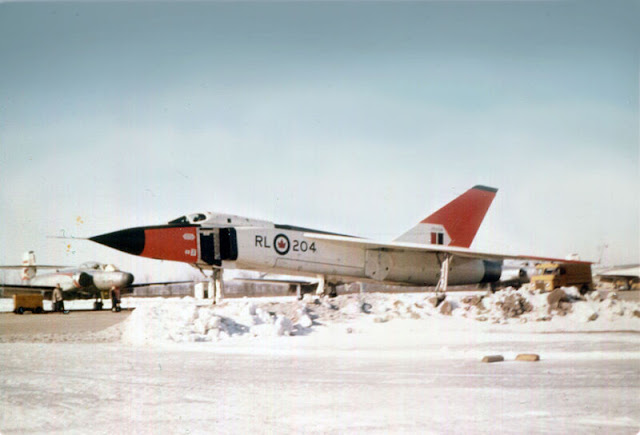 The Avro Arrow is often heralded as being "well ahead of its time".  This is an accurate statement, as the Arrow incorporated technologies that would not see maturity until much later on.  Internal weapon carriage, dependence on radar-guided missiles, and fly-by-wire control systems are the realm of modern fighters like the F-35.

Being ahead of its time is not always a good thing, however.  Radar guided missile proved nearly useless over Vietnam.  In an alternate timeline where the Arrow saw production, it might not have been a useful platform until the advent of the AIM-54 Phoenix or possibly even the AIM-120 AMRAAM.  It had the potential of following a similar evolution to the MiG-25 Foxbat/MiG-31 Foxhound, but it would take years, even decades meet that potential. 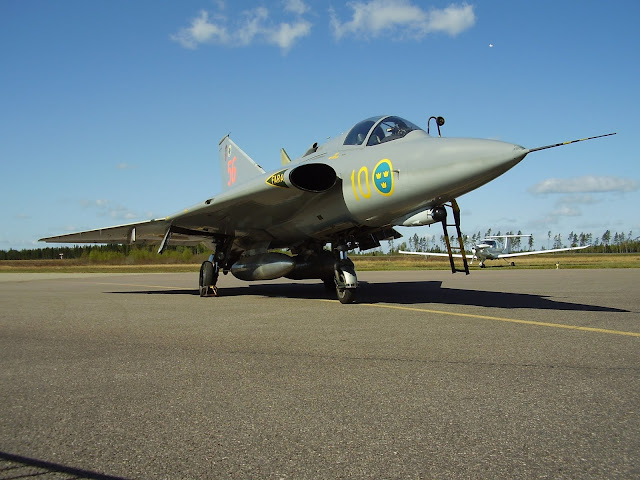 The Draken, on the other hand, was right fighter right out of the box.  One could even say it overdelivered.  It went from first flight to operational status within five years.  Despite being intended solely as an interceptor, its double-delta wing gave it the maneuverability of a dog-fighter.  Danish Draken's were modified to function as strike aircraft.  While the Draken could not be considered a true multi-role fighter, it came close.

The Draken would remain in combat service until 2005, outlasting contemporaries like the F-104 Starfighter by a substantial margin.  The Swedish Air Force Historic Flight team continues to fly two airworthy examples.

The success of the Draken is not simply due to its simplicity, but from political will.  Sweden's commitment to neutrality and self-sufficiency ensured that indigenous fighter design was neither a luxury nor a point of national price, but a necessity.  This philosophy has carried on to the present day, although it may not last for much longer.

Still, the biggest difference between the Arrow and the Draken were basic design philosophies.  The Arrow was intended to "best in the world"...  While the Draken was simply intended to be the "best for Sweden".

Sometimes "good enough" is more than enough, and "the best" is too damn much.
Avro Arrow Saab Saab Draken