Lately, the idea of a "hybrid" between the F-22 and F-35 seems to be gaining steam.  First proposed to Japan when its self-designed F-3 project fell through, Lockheed is now pitching the idea to The Pentagon.

This (sort of) new fighter would take the more modern sensors, avionics, and other newer technology found in the F-35 and modify them to fit the F-22 Raptor.  This new enhanced Raptor would also sport a more modern stealth coating that promises to require maintenance.

It is not a bad idea.  Such a beast would not only offer improved capabilities for the F-22, but could actually result in lower flying costs.

This new fighter (F-22B?  F-22E?  F-22X?  F-28.5?) would improve on the Raptor's exceptional air-to-air capabilities.  One of the F-22's current weak spots is the absence of any sort of IRST.  The addition of DAS (Distributed Aperture System), combined with a helmet-mounted display (HMD) would give the F-22 true 360 degree situational awareness.  "Raptor Salad" would no longer be on the menu.

Better still, the F-22 could be given much improved ground attack capabilities.  Currently, the F-22's air-to-ground prowess is rather limited, but the addition of the F-35's EOTS and other tweaks could turn the F-22 into a true successor to the F-15E Strike Eagle.

Such a platform would undoubtedly have some overlap with the JSF's capabilities, but that is to be expected.  Even with an equal payload, the F-22 would have improved range, speed, and include two internal AIM-9 Sidewinders.  Simply put an "F-22E Strike Raptor" would be a deadlier machine, capable of surviving scenarios the F-35 would not.

Lockheed Martin has good reason to offer up an updated F-22.

Despite promises to the contrary, the F-35 may soon find itself outmatched by other fighters nearing production.  It is also not meeting foreign sales predictions as prospective buyers back out or take a "wait and see" approach.

Meanwhile, the USAF's air-superiority workhorse, the F-15C/D, is not getting any younger.  Boeing has proposed several new F-15 variants in an attempt to reinvigorate sales.  Unfortunately, the proposed F-15SE "Silent Eagle" was met with little interest.  Boeing has followed that up with the more conventional "F-15X".  While the improvements are interesting, they do not change the fact that the F-15 platform is a 50-year-old design.

While the current F-22 still holds the air-superiority throne, it suffers from a lack of availability, high cost per flight hour (CPFH), and some glaring weaknesses.   Fixing these problems would keep the F-22's "king of the hill" status for decades to come...  Or at least until "6th generation" fighters start making an appearance. 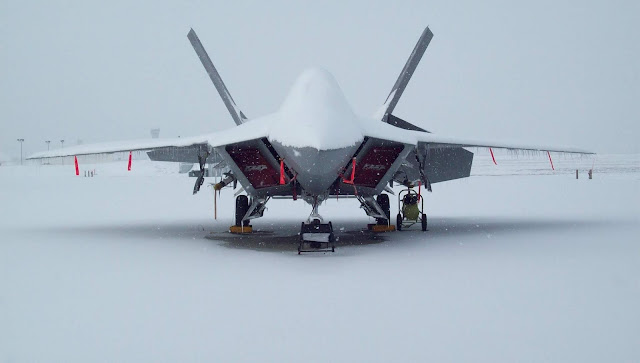 So would an updated F-22 be right for Canada?

Obviously, a stealthy, multi-role, supercruising, long-ranged, twin-engined fighter would be IDEAL for Canada's needs.  More so when that fighter is used by our NORAD ally.

Unfortunately, this F-22/F-35 hybrid is little more than a proposal at this point.  Even if it were to become a reality, a prototype would be years away.  Full production would not likely start for another 10 years at the least.  This puts it outside the timeline proposed to replace the CF-18.

Even if the fighter were available in time to replace the CF-18, there is still the issue of cost.  While an updated F-22 promises to be more affordable than the legacy model, it would still likely be a costly machine to purchase and operate.  This is still a big stealth fighter equipped with two big engines and the latest tech.  At best, its CPFH would still likely be higher then the F-15E.  Given Canada's typically tight-fisted defence spending, a fleet of 88 enhanced F-22s would likely be a non-starter.

This is not to dismiss an enhanced F-22 for Canada completely.  A lot could change in the next few years...  Just look at the last ten for proof.  Political climates change, as do spending priorities.  Canada could very well find itself in need of a higher-end fighter to supplement whatever ends up replacing the CF-18.

If Canada found itself in need of a world-beating fighter, and enhanced F-22 would certainly be at the top of the list.