November 01, 2017
When I started this blog's progenitor, http://gripen4canada.blogspot.ca, my thesis was that the F-35 was not the right fighter to replace Canada's aging CF-18 fleet.  At the time, the JSF project was years behind schedule, billions of dollars over budget, and still nowhere near to fielding a competent multi-role fighter.

It turns out a lot of people agreed with me.

Since that time, Canada has changed governing parties.  The current ruling party went so far as to promise to cancel Canada's F-35 purchase and to hold a fair and open competition.  Since coming into power, they also made it known that Canada suffers from a "capability gap" that required immediate attention.

We all know how that turned out so far...

As the years have gone by, the Joint Strike Fighter program has continued to plod on.  The F-35 has undoubtedly made progress, and both the USAF and the USMC have declared the fighter fit enough to meet Initial Operating Capability (IOC).

With Boeing's Super Hornet now being declared persona non grata amongst the Canadian government, the door is now open for the Trudeau government to reconsider the F-35.  After all, despite its faults, at least Lockheed Martin did not actively attempt to squash Canada's indigenous aerospace industry.

Is it time to give the F-35 a second chance?

Despite all the initial bluster, the Trudeau government has not yet closed the door on the F-35.  It will be among those fighters considered in a "fair and open competition".  Not only that, but Canada has continued (albeit quietly) to pay its membership dues in order to remain a partner in the JSF Industrial Program.

Lockheed Martin (no doubt smelling blood in the water) has even been so nice as to offer the F-35 Lightning II as an interim fighter in lieu of Boeing's Super Hornet.

Ignoring the ludicrousness of adopting the JSF as a short term "interim" fighter, the offer does make a certain amount of sense.  The mechanisms are already in place for Canada to purchase the F-35

The mechanisms are already in place for Canada to purchase the F-35.  As a longstanding JSF partner, we would not need to additional permission from the US Government.  Lockheed Martin is ramping up JSF production to seventeen aircraft per month by 2020, so it would not take long for those Canadian F-35s to be built.  Oddly enough, the F-35 may be fastest way for Canada to address its "capability gap".

Despite its troubled history, the F-35 is finally starting to enter service.  The USMC declared the F-35B's IOC more than two years ago.  The F-35A's (the version Canada would procure) IOC back in  2016.  Officially, the JSF is no longer a prototype.  It is in service.

Despite assumptions to the contrary, the F-35 has not been relegated to the role of hanger queen.

While an engine fire preempted the JSF's transatlantic debut at the 2014 Farnborough Air Show, the aircraft was able to perform as planned two years later.  Since then, the F-35 has performed at multiple air shows and events without nary a hitch.

The F-35 has proven itself beyond air shows, however.  It is being deployed around the world.  During Red Flag, the F-35 posted a simulated kill ratio of 15:1.  (It should be noted that these events are scripted in favor of "blue air" and the outcome is never really in doubt)

As the F-35 slowly enters service, it continues along its development path.  Examples fitted with the "Full Combat Capability" Block 3F are now being delivered.  While the 3F software still lacks some capabilities, it is enough to declare the jet battle-ready.

One could argue that Canada's initial misgivings regarding the JSF were premature...  But there are still some issues.

As has always been the case with the JSF, its most outstanding issue is its cost.  Its acquisition cost still remains quite high at $95 million per unit.  This, despite aggressive cost-cutting actions and pressure from the White House.

A lack of repair depots have resulted in a severe shortage of spare parts for the aircraft.  Broken parts take up to six months to replace.  Because of this, an F-35 has a 22% chance of being unavailable.  This is more than twice the expected 10%.  Until these depots are up and running (around 2022), this problem will get continue to get worse as the number of aircraft in service overwhelms the capability to repair them.

There was, of course, a minor problem with the F-35 starving its pilots of oxygen.  We can only hope a recent "algorithm tweak" fixed that particular issue.

Many have argued that most of these issues are simply "teething problems" associated with a new aircraft type.  Given time, they say, the F-35 will be just as dependable as the F-16 or F/A-18 are now.  This may be the case, but the JSF will need many more years getting there. 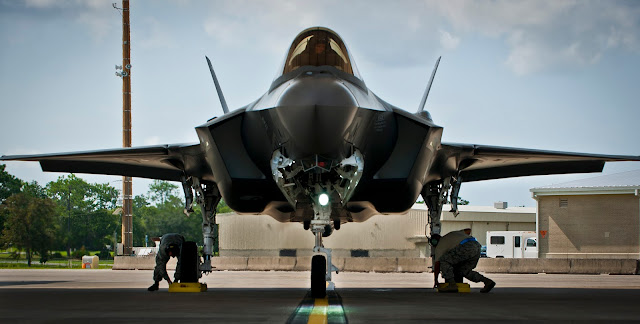 So should Canada reconsider the F-35?

Like any of the other fighters being considered, it should be considered and ranked based on its merits.  All the fighters have their strengths and weaknesses, the F-35 gets most of the attention because of its newness and large scope.  Due diligence needs to be exercised to ensure what is the right fighter for Canada.  In order to be selected, a fighter would have to prove itself capable, reliable, and affordable.  It would also need to offer additional economic benefits to Canada as well (a category in which Boeing recently earned a solid "ZERO").

As it stands, Canada may have made a wise decision to not go forward as planned with the JSF.  Early plans on being an early adopter would have resulted in fighters that were still in need of retrofitting.  Possibly, we may have been stuck with some some that will never be combat capable.

Perhaps Canada would be better off avoiding an "all in" approach the the F-35.  Most JSF buyers are operating the F-35 as part of a mixed fighter fleet.  Perhaps Canada should reexamine this option.  A small amount of F-35 acquired under the auspices of an "interim fighter" may allow Canada to "try before we buy"...  In theory, anyway.

Unfortunately, there would be little time to field test the F-35 in the RCAF before a final decision would have to be made.  Selecting the F-35 as a full-on CF-18 replacement would remain a risky prospect.

There is an opportunity here for the Government of Canada to compromise on a JSF purchase and purchase a few (18) instead of many (88).  This would give the RCAF the F-35s vaunted abilities to operate in high risk environments.  The other 70 fighters could be seen as a "workhorse" for use in training, sovereignty missions, and operating in lower risk environments.

If Canada ends up flying a mixed fleet due to the need for an "interim fighter" the F-35 may indeed be smart choice.