For those of you whom have been living under a rock the last 24 hours, Bombardier has now partnered with Airbus in order to save the C-Series.

No actual money has exchanged hands, but Airbus now owns 50.01% of the C-Series program.  This gives Airbus controlling interest in the jetliner moving forward.  While this may seem like a blow to Bombardier to see its pride and joy become the property of someone else, this partnership all but assures the future of the C-Series and Bombardier as a whole.

Under this new partnership, C-Series headquarters will remain in Montreal and production will continue in Bombardier's Mirabel assembly plant.  Airbus will expand C-Series production by utilizing its pre-existing plant in Mobile, Alabama.  This will allow the C-Series to circumvent the U.S. Department of Commerce's crippling 300% import tariffs.  Airbus will also contribute its considerable marketing and supply chain prowess.

In effect, Bombardier has a sacrificed part of the pie...  But the pie will now likely be far bigger.

The deal is described as "win-win-win".  Bombardier and its C-Series have a much more secure future, Airbus gets a new airliner that slots just under its A320 series, and Delta gets its airplanes without that pesky (possibly illegal) tariff.  Bombardier shareholders are happy as the values of their shares go up.  Meanwhile, workers at Bombardier's Mirabel plant should have gainful employment until 2041.  Taxpayers in Canada and especially Quebec can rest easy that government investment into the C-Series will not turn into a write off.

There is, of course, one big loser in all this.


If Boeing was having scary dreams about the C-Series before, it is now in the middle of a nightmare that it cannot wake up from.

Boeing has no one else to blame.  It created its own monster here.

By tying itself to the "Trump train" and attempting to stifle competition utilizing American protectionism, Boeing has driven Bombardier into the arms of Boeing's chief rival.  Like the mythical hydra, two heads have grown where there was once one. 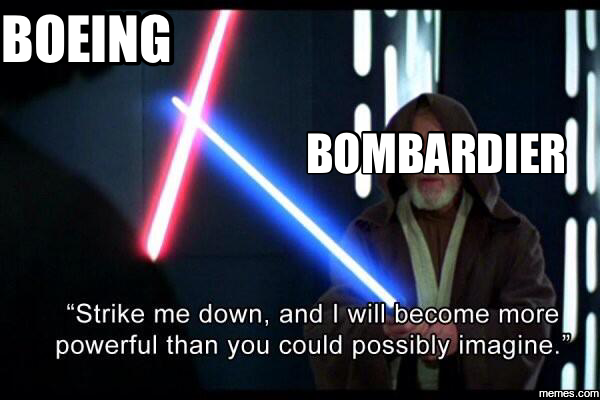 Boeing will now be forced to market its venerable 737 against both the C-Series and the A320 NEO...  Except now, BOTH models will be backed by the European-based aerospace giant.  Boeing could very well be in for a hard time marketing the 50-year-old 737's design against two much newer designs that both utilize fly-by-wire and geared turbofans.

At least Boeing has its military branch to fall back on, right?

When it challenged the Bombardier, Boeing quickly lost friends all over the world.  The Canadian government all but scuttled its plans to purchase interim 18 Super Hornets from Boeing's defence branch.  Not only has Boeing lost this easy, no-bid sale; but it all but put itself out of the running to sell up to 70 more CF-18 replacements.

But we won’t do business with a company that’s busy trying to sue us and put our aerospace workers out of business.

The United Kingdom has also promised to fight back against Boeing.  The UK set up a £113 million loan to help set up a factory in Belfast to build the C-Series wing assemblies.  These jobs were put at risk thanks to Boeing's legal action.  Now, Boeing may have put future defence contracts at risk.

Luckily for Boeing, it just recently inked a deal to sell P-8A Poseidons to the RAF.  Ironically, these are based on the 737.  While this sale may be safe, it is doubtful Britain will knock on Boeing's door for anything else in the near future.


The largest casualty in all this may ultimately be Boeing's reputation.

By speaking out so loud against Bombardier, Boeing reminded the world that it too was the recipient of government largesse.  Its protests against Bombardier came across as pure hypocrisy.  Moreover, Boeing's actions confirm the world's worst fears regarding Trump-era America:  That the USA believes it can play by its own set of rules, other nations be damned.

This may come to a shock to Boeing, Trump, and the rest of America; but the rest of the world can get along just fine without them.

In the end, Boeing's aggression towards Bombardier may have only benefitted its competition at Boeing's own expense.  Bombardier will likely build more C-Series than it ever would without Airbus's help.  Airbus will steal more sales away from Boeing's bread-and-butter 737.  Boeing's military division will watch helplessly as Canada looks elsewhere for much-needed fighter jets and maritime patrol aircraft.  Other nations may soon follow suit.

Instead of relying on its engineers to build a better aircraft, Boeing decided to let its small army of lawyers and lobbyists to stifle competition.  That mistake will end up costing Boeing BILLIONS.

But hey, at least they still got Air Force One...