Thanks to "Trumponomics" the plan to acquire 18 F/A-18E/F Super Hornets is now effectively dead. While not yet official, Boeing has now positioned itself persona non grata to Canada's Liberal government.  After months of rhetoric and threats, the Liberal government would be foolish to back down on their threats to cancel its Super Hornet buy if Boeing continued its suit against Bombardier.

Procuring the Super Hornet at this point would be political suicide to the Liberal party.  They would be roasted, and rightly so, all the way to the next election.  In the meantime, they risk appearing weak in NAFTA talks.  Who would back down against a government full of empty threats?

Barring any last-minute compromise, the idea of a Canadian Super Hornet dead on arrival.  And we were so close, too.

What is Canada to do now though?  We still have a fleet of rapidly aging fighters and a "capability gap".  We need new jets.  Sooner, rather than later.

With that in mind, let us look at some of the options and how easily they could be amalgamated into the RCAF within a short time frame and limited numbers.

F-35 lovers have reason to celebrate.  Many still see the JSF as the de facto choice now that the Super Hornet is out of the running.  They may be right.  Canada is still part of the JSF industrial program, after all.

In its favor, the F-35 is much further along than it was two years ago (has it been that long) when now-Prime Minister Justin Trudeau stated his party would not buy the troubled stealth fighter.  This recent kerfuffle with Boeing gives the Trudeau government ample reason to renege on that promise.  The JSF program has its problems, but at least it is not actively trying to scuttle Canada's only major indigenous aerospace company.

Lockheed Martin has even offered the F-35 Lightning II as an "interim" fighter solution.  This option seems downright laughable considering that the JSF is still nowhere near ready for primetime.  They would also require a gargantuan amount of effort to fit into our existing infrastructure.  That effort may be worth it for an entire fleet, but not for a temporary addition of 18 aircraft.

Quite frankly, the only way a F-35 purchase would make sense as an "interim fighter" would be to buy a small amount (18) to operate alongside a more affordable fighter as part of a mixed fleet.  This would fulfill Canada's commitment to the JSF program and hopefully put the issue to bed.

Even without the the technical issues, settling for the F-35 would undoubtedly leave an incredibly bad taste in the government's mouth.  Not only would they be breaking an election promise, but they would be still be capitulating to the American government.  The same government that went above-and-beyond the 80% percent tariff petitioned by Boeing to a staggering 220%.

No less than the American government has set out to destroy Bombardier's (and by extension, Canada's) attempt to compete in the airliner market.

As I have stated in my previous blog post, Canada needs to reconsider the origin of any future military purchases.  Defending our economic interests is just as important as defending our military interests, if not more so.

Possibly one of the easier options is to opt for used legacy Hornets.  Both Australia and Kuwait plan on selling their current F/A-18C/Ds as they are replaced.  This idea has several advantages.  The aircraft would fit right in with Canada's current Hornet fleet.  While the aircraft would require some modifications to meet the RCAF standard, these would be relatively minimal compared to any other choice.  Additional training would likely be a non-issue, as would any logistic concerns.  For all intents-and-purposes, these used Hornets would be "plug-and-play".

As quick and easy adopting used Hornets into the RCAF would be there are several caveats.  Not the least of which is availability.  These aircraft are not available now, but "soon".  Both Kuwait and Australia are replacing their legacy fleets (with the Super Hornet and F-35, respectively).  They will not be willing to part with their old aircraft until new ones are delivered.  If Australia faces delays receiving Lightning IIs, Canada would have little choice but to sit and be patient.

Even if there is no delay, ordering used legacy Hornets does little to alleviate Canada's fighter problem.  Yes, we would have a few more fighters...  But they will still be decades-old aircraft with a dwindling parts supply.  Canada would also still be flying Boeing aircraft.

There is also a large political factor to consider.  Consider that the Trudeau government promised to cancel the F-35 purchase in favor of a smaller Super Hornet purchase...  Only to cancel that in favor of buying used fighters.  This would be ill-advised strategy for a political party that has been guilty of skimping on military spending in the past with disastrous results.

Used Hornets would be an easy option...  Just not a particularly desirable one.

Now more than ever, the European aircraft have a chance of securing a Canadian sale.  With both American fighter jet manufacturers out of Canada's good graces, we may be ready to see an upset.

The biggest upset would be Dassault's Rafale.  While it is an excellent all-around fighter, adopting it as an "interim" fighter makes little sense.  Its need to be thoroughly "Canadianized" to fit into the RCAF (weapon compatibility, etc) would seem to be an awful lot of work for just a handful of possibly temporary aircraft.

There is also the question of availability.  The Rafale has been on a bit of a roll lately, with sales to Egypt, India, and Qatar.  Canada may be forced to simply wait in line while Dassault fulfills current orders; a process that could take years. 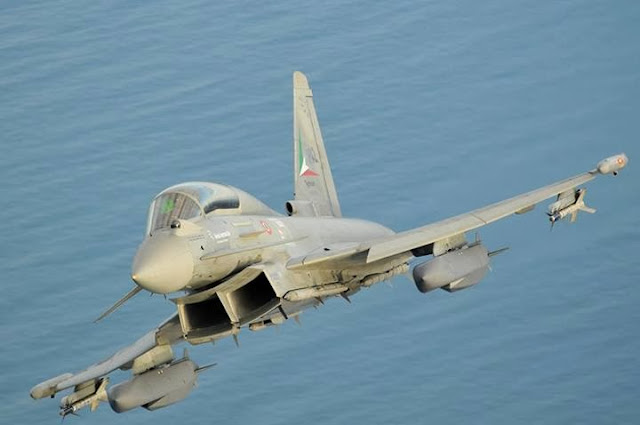 One of the most enticing options for Canada's interim fighter could be the Eurofighter Typhoon.  The Typhoon would be an excellent fit for the RCAF as it checks off all the pertinent boxes.  It is already in wide use throughout NATO, it uses much of the CF-18s armament, it is a stellar performer, and it has two engines (for those that care about such a thing).

As far as availability is concerned, the Typhoon presents a several options.  Eurofighter is actively seeking customers for new-build aircraft but there are plenty of older Typhoons available.  This is thanks to the Typhoons bewildering amount of variants.  It is often more economical to replace older Typhoons instead of upgrading them to newer standard.  This means there are more than a few older models up for grabs.

One could be almost assured that Prime Ministers Trudeau and Elizabeth May touched on the possibility when they met a short while ago.  Considering that the UK has placed itself firmly in our corner of the Bombardier dispute, the idea of an RCAF Typhoon has now become a very real possibility.

Unfortunately, part of the reason why there are so many Typhoons available seems to be because there are a few disgruntled costumers.  The Typhoon has been notoriously finicky and costly to run, with reliability issues forming a dark cloud over the fighter.

Regular readers know of my fondness for the Gripen.  Like a piece of well designed IKEA furniture, the Gripen is a no-nonsense, low-frills, and low cost option.  Saab is remaining quite bullish regarding its Gripen E, marketing the aircraft as a low-cost option to the F-35.  Flight tests are currently underway and deliveries are set to begin in 2019.

Like the Typhoon, the Gripen would be a rather easy fit into the RCAF.  Most of the CF-18's arsenal is already in use on the Saab.  The Gripen is smaller aircraft with similar runway requirements, so it should not have any problems utilizing existing infrastructure.  Existing Gripen C/D models utilize an engine based on the CF-18s GE F404, reducing issues regarding parts and training.

As far as availability, the Gripen has it in spades.  Saab should have plenty of production capacity available thanks to Switzerland cancelling its order for 22 Gripen Es following a referendum.  Sweden is also in no particular rush to replace its own fleet of nearly-new Gripen C/Ds.  Saab is also in the habit of leasing Gripens so there is always the possibility of off-lease models becoming available.  Due to the nature of many Gripen buyers (not the aircraft itself) many Gripen airframes do little more than sit around doing nothing.

The biggest detriment to the Gripen (specifically the C/D models) is that it is not as capable as the CF-18 in some ways.  Less payload capability and range (both issues addressed with the E model) are the biggest strikes against it.  Like the F-35, the Gripen may work better as part of a mixed fleet.  It also does not the same political clout as the others.  Thus far, Saab has been hesitant to aggressively market the Gripen to Canada.  Hopefully this will change, as there has never been a better time to do so.

The remaining option is to merely dismiss the "interim fighter" selection altogether.  The best way to do this would be to fast-track the selection of the full-time CF-18 replacement, using the information already available to pick a winner within the next year with deliveries starting in 2020 at the latest.

Hopefully, this whole messy business with Bombardier and Boeing will give the Canadian government incentive enough to give non-traditional options a thorough look.  The excuse that Canada needs American-sourced fighters for "interoperability reasons" only goes so far.

One thing is for sure, any further delays are unacceptable.