While science fiction has many examples of what could be described as a starfighter, there really is nothing more iconic than the Incom T-65 X-Wing starfighter from the Star Wars universe.

Instantly recognizable by both young and old, the X-Wing has not only taken a prominent role in film, but in countless video games, comics, novels, toy chests, and model shelves.  The X-Wing ranks up there with pop-culture icons like the starship Enterprise, Batman, Barbie, or Mickey Mouse.

In universe, the X-Wing is just as legendary.  As the ship that blew up the Death Star, it became an everlasting symbol of the Rebel Alliance and their fight against the Galactic Empire.

What was it about the X-Wing that made it so special?

Being superlative in a category does not make a good fighter, however.  TIE fighters lacked deflector shields, B-Wings were unreliable, A-Wings were notoriously unforgiving, and Y-Wings were too sluggish when pitted against Imperial fighters.  The X-Wing, while not class-leading in any particular category, struck the right balance of speed, agility, firepower, and ruggedness.

It was this balance that made the X-Wing so popular with Rebel pilots.

Incom, the manufacturer behind the X-Wing, was responsible from successful Clone War designs like the Z-95 Headhunter and ARC-170.  The X-wing evoked design elements from both.  The X-Wing design ended up in Rebel hands thanks to the defection of Incom's design and engineering staff.  This was exceptionally good news for the Rebel Alliance, as their current fleet of venerable Y-Wing fighters were ill-equipped to deal with faster and more maneuverable TIE fighters.  The arrival of the X-Wing for space-superiority missions allowed the more robust Y-Wing to take on heavy assault duties.

The design philosophy behind the X-Wing was simple in theory, difficult in execute:  A starfighter that was easy to learn, easy to maintain and deploy, yet deadly in the battlespace.  Incom managed to to find the perfect balance.

The need for ease of use was necessary due to the Rebel Alliance's pilot diversity.  Imperial pilots had the advantage of strict training regimens starting from an early age at the Imperial Academy.  Rebel pilots, on the other hand, came from much more diverse backgrounds.  Rebel pilot ranks were filled by smugglers, farm hands, Imperial defectors, and even planetary royalty.  To help ease transition, Incom fashioned the X-Wing's controls similarly to the T-16 Skyhopper, a cheap airspeeder that was a common sight throughout the galaxy.

The X-Wing's ruggedness and deployability was inherent to its design.  Unlike Imperial TIEs, it was equipped with a hyperdrive.  This was mandatory for the Rebel's hit-and-run tactics; surprise attacks quickly followed by a jump to light speed.  R2-units provided navigation duties, power management, and minor repairs in flight.  Not only did its distinctive S-foils help cooling, but they helped spread out the engines and laser cannons.  Spaced apart, a hit on one was not always disastrous.  Plenty of X-Wing pilots can share stories of a engine nacelle being damaged, but living to fight another day thanks to their heroic R2-unit rerouting power and facilitating repairs in the heat of battle.  This would explain why many X-Wing pilots became so attached to their astromech droids. 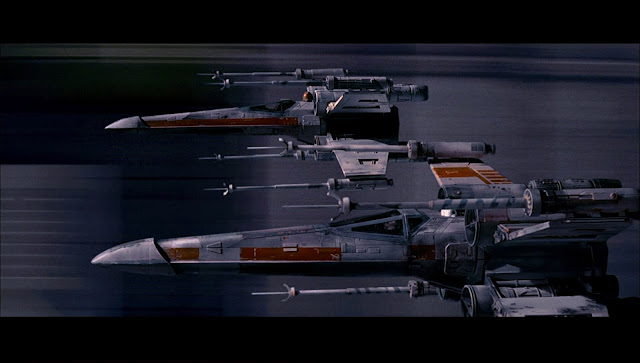 The design philosophy behind Rebel snub fighters served as an antithesis to that of the Empire.  Having no shortage of pilots, the Empire's strategy was simple:  Overwhelm using sheer numbers.  Unlike their Rebel counterparts, most TIE fighter variants lacked deflector shields or hyperdrives.  TIE pilot that survived a mere handful of missions were considered "elite", earning them the privilege of helming more advanced ships like the TIE Interceptor or even the TIE Avenger.

In contrast, the Rebel Alliance knew that skilled combat pilots were a valuable commodity.  Even if a battle was not a full success, an X-wing pilot could often "limp home" allowing them to live long enough to fight another day.  One such pilot, Wedge Antilles, lived long enough to become a veteran of not one, but TWO Death Stars.

The X-Wing, like other Rebel fighters easy to deploy.  Whether it from a capitol ship, jungle planet, or even the frozen wasteland of Hoth, the T-65 was always ready.  With no hyperdrive and requiring dedicated infrastructure, Imperial TIE's required a nearby Star Destroyer or other base. 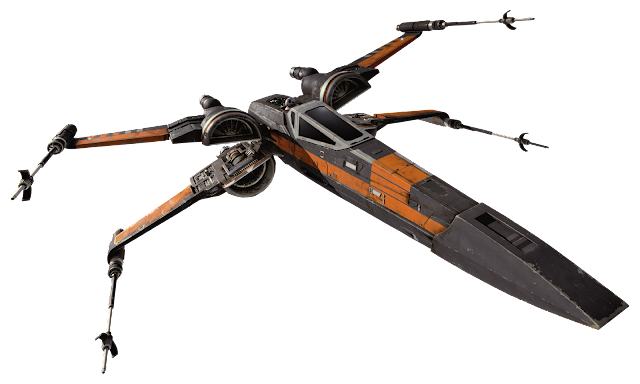 The X-Wing was so successful that its design lives on 30 years later.

While superficially similar, the newer T-70 X-Wing shares very few components with its predecessor.   Advancements in miniaturization has resulted in a sleeker shape, allowing for the enhanced atmospheric performance.  The T-70 also mounts a rear-firing blaster, useful for defense against pursing fighters.

The X-Wing stands out as the quintessential starfighter...  Or fictional fighter in general.  While much of its lasting endearment is based on the strength of the Star Wars franchise, the X-Wing still serves as the gold standard of cool spaceship models.

While other fictional craft like the Millennium Falcon, the Enterprise, and even Serenity evoke just as much nostalgia as the X-Wing, these are one-off spacecraft that are given ample screen time and may as well be considered part of the cast.  By comparison, the X-Wing is ubiquitous, usually flown by secondary characters.  The X-wing itself is content to be a supporting character, never the star.

It is this "everyman" status that makes the X-Wing great.  While the Star Wars franchise tends to focus on the Skywalker family, never forget that the Empire is brought down by countless Rebels that have no affinity for the Force.  It is these "average" Rebels that are the true inspiration behind the franchise.  Risking everything against a more powerful foe simply because it is the right thing.

Yes, I will be watching Star Wars: Rogue One this weekend.  Like its protagonists, I too choose to rebel.