Science fiction is filled with examples of small, deadly spacecraft able to engage in dogfights as well as conduct attack missions on enemy capital ships and space stations.  Usually, these are flown by the story's heroes against overwhelming odds.

What is the best starfighter in all the galaxy, or universe for that matter?

Fans of Babylon 5 will immediately recognize the distinctive shape of the Earthforce Starfury.  Armed with plasma weaponry, the Starfury stands out for paying attention to Newtonian physics.  This starfighter does not maneuver similarly to a earth-borne aircraft.  It accelerates, decelerates, and changes direction by utilizing its four vectored thrust engines and various thrusters.


What really makes the Starfury interesting is its design aesthetic.  In universe, it's practical, no-nonsense construction is immediately recognized as a human design.  Alien races are recognized by their design aesthetic as well.  For example, the Vorlon use more organic squid-like shapes, while the French-empire-inspired Centauri use a more gothic design.

While small, the Starfury is capable of faster-than-light by utilizing jump gates.  Unlike the other starfighters here, the Starfury cannot operate inside an an atmosphere and requires either a carrier or spacestation.  A later version, the Thunderbolt, rectified this issue...  But looks a little too similar to another starfighter.

[For those who have not seen it, I highly recommend watching the Babylon 5 series.  While the early CGI may not have aged well, the storyline, dialogue, and acting are absolutely brilliant.  It requires a bit of patience, as the first season starts off slow, but the second-through-fourth seasons are a huge payoff.  The fifth season is hit-or-miss, but worth the watch.]


In one form or another, the Buck Rogers franchise has been around since the 1920s.  The franchise, while undergoing changes over time, ultimately centers around a modern-day human who gets frozen in time only to reawaken in the 25th century.  Buck Rogers has been brought to life through comics, role-playing games, and television.

Most readers will recognize the campy television series of the early 80s.  Despite occurring in the year 2491, the series utilized disco music, shiny spandex body suits and even Gary Coleman.  Despite the shows flaws, Buck Rogers and the 25th Century did have some interesting production design.  Not the least of which was the Thunderfighter.

The main starfighter of the Earth Defense Directorate, the Thunderfighter was a two-seat fighter capable of faster-than-light travel thanks to star gates.  For special missions, a four-seat variant was available with two-abreast seating in a widened cockpit.

Thunderfighters relied on a sophisticated combat for combat maneuvers.  Unfortunately for its pilots, these computers were rather predictable in their tactics.  Combat losses were high until Rogers suggested pilots relied less on the combat computer and flew more "by the seat of their pants".

The dirty secret behind Buck Roger's Thunderfighter is that it was originally a design study for Battlestar Galactica's Viper.  Both were designed by legendary concept artist Ralph McQuarrie, a man who is name is attached to an embarrassing amount of science fiction franchises.

The Viper itself is an iconic design.  A blunt-nosed fuselage with three engines places in a pyramidal shape, each affixed with a stabilizer fin.  A simple shape that can be easily doodled, yet enough interesting details to make it seem real.  While the design has gone through some changes over the year.  It has maintained its basic shape.  During preproduction of the 2000's reboot series, the decision was made early on to dramatically change just about everything...  Except the Viper.

Depending on the series, the Viper was armed with either "laser torpedoes" (original series) or mass driver cannons (reboot).  They were capable of operating in a planetary atmosphere, but worked their best when deployed out of the pinnacle of Colonial warships, the Battlestar.

In the rebooted series, more computer systems in state-of-the-art Mk7 models were easily hacked by enemy Cylon forces.  In a desperate attempt to mitigate this, older Mk2s were brought out of mothballs.  These more "analog" fighters gave Colonial forces a fighting chance.  Surviving Mk7s were later corrected of their vulnerability. 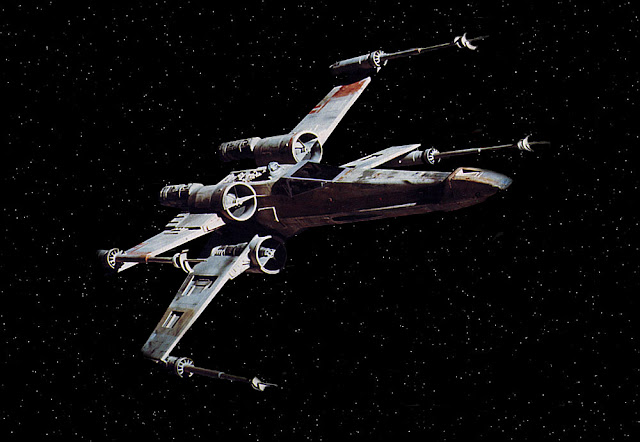 As great as all these starfighter designs are, they all pale in comparison to the legendary status of the true winner.  So what does that leave as the Best Fighter in the Galaxy?

As if you didn't already know...  Tune in tomorrow.