November 13, 2016
[Note:  I take little joy in this post.  As much as I would like to discuss fighter jets, Trump's election will have a profound effect on Canada's defence policy.  There is no ignoring the big, orange elephant in the room.  That being said, let us get this out of the way.]

Full disclaimer:  I am no fan of Trump.  He in a privileged, obnoxious demagogue who somehow manipulated enough of the American public to become their President-elect.  For years he has cultivated his brand into the point of a cult of personality.  His election strategy was based on hate, scapegoating, and xenophobia.  Whether or not this continues into his presidency remains to be seen.  I, like many Canadians, find Trump and his rhetoric abhorrent.  He is a hypocrite the very personification of the "elitist" that he has demonized in his calls to "drain the swamp".

Donald Trump is everything ugly about America.

He is now their President-elect.

Like it or not (and I don't), the inauguration of Donald Trump will have a profound effect on Canada and its defence policy.  Canadians should anticipate the largest shake-up to its defence policy since the 9/11 terrorist attacks...  Possibly since the end of the Cold War.

Trump's rhetoric concerning defence matters on the campaign trail has been at best unpredictable at best, panic inducing at worst.   The underlying theme is obvious, however:  Trump wants other nations to step up.

Most worrisome for Canada has been Trump's suggestion that the USA would only assist another NATO nation if "they fulfill their obligations to us".  This is despite the fact that the only time NATO has ever needed to activate it "Attack on one, is an attack on all" clause was to support the USA in the aftermath of 9/11.  Trump would do well to remember this.

Whether or not Trump's campaign rhetoric lives on, his election should serve as a wake-up call for Canada to increase its military spending.  This should be done, not in response to his extortion-like tactics, but in the realization the world will become a much more unpredictable place under his term.

1.  Trump's disrespect for NATO and its allies will likely force Canada into taking a much larger role than we already do.  Great Britain's Brexit vote was already posing some difficult questions for the NATO alliance, Trump's foreign policy could ignite a full-blown crisis.

2.  Trump's reported "bromance" with Vladimir Putin puts added emphasis on Canada's need to beef up its arctic sovereignty.  Canada can no longer afford to take American support for granted in the event of any Russian incursion.

3.  Trump's election has made one thing abundantly clear.  The United States of America is a deeply divided nation.  In a sick twist of irony, Trump's election is being met with the same civil unrest he advocated towards his political opponent.  There is even a serious push for California (the 6th-largest economy in the world) to secede from the Union.  President-elect Trump's opposers have made it very clear, they will not go softly into the night.  This could very well represent a threat to the very stability of the Great American Empire. 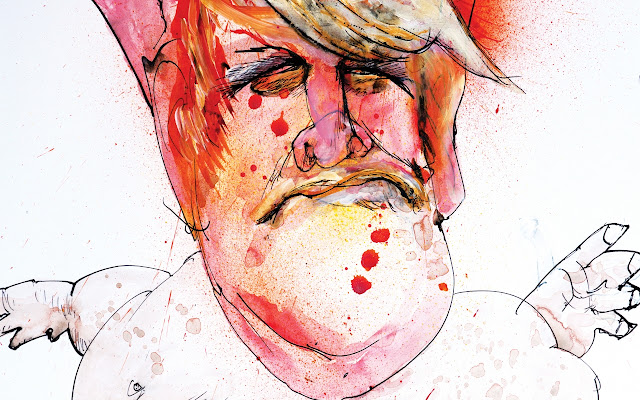 Like it or not, expected or not, Canada must accept Trumps ascendency to the White House.  The "bromance" enjoyed by Prime Minister Trudeau and President Obama will soon come to crashing halt to be replaced with a cooler relationship between leaders.  Trump's pledge to renegotiate NAFTA and the Trans-Pacific Partnership will undoubtedly lead to loggerheads, as well Trump's energy policy.

The underlying narrative here may read like Canada has no other choice but to simply accept the new reality and simply hope the next four years go by smoothly for us.

While Canada may be forced into making some tough choices in the months ahead, they are still our choices to make.

While Trump may may righteously demand that NATO members spend the 2% of GDP that NATO guidelines recommend spending on defence...  There is no stipulation on how that money is spent.  Of course, the USA would prefer NATO nations to spend a great deal of that on American-built weapons.  The USA is the largest weapon exporter in the world, after all, and increased weapon sales would undoubtedly help create jobs for their military-industrial complex.

This is where Canada should send a clear message by spending that money elsewhere whenever possible.

This may seem petty, but it is not without precedent.

Consider the uproar when Canada signed a deal to sell light armored vehicles (LAVs) to Saudi Arabia.  There was (and is) great concern that these vehicles will not only be used for defence, but to squash civil uprising.  One could make the same argument that we should not be buying weapons of war from a nation that puts laws into effect that discriminate based on race or religion.

(Yes, America does have provisions to protect against discriminatory laws.  Remember that Trump will soon be tipping the balance of the Supreme Court, the body charged with interpreting these laws.)


For Canada's upcoming CF-18 fighter replacement, we should remember that both the F-35 Lighting II and the Boeing F/A-18E/F Super Hornet are manufactured in states that predominantly voted for Trump (Texas and Missouri, respectively).  While the people of these fine states have the right to support whomever they wish for president, this does not absolve them of the repercussions of voting for a candidate who based his campaign on hate speech.

Some say that politics should have no bearing on the selection of military hardware.  That we should merely buy the best aircraft for our needs.  That sounds great in theory, but the reality is that politics plays a major role in defense acquisition.  This is an unavoidable truth whenever spending billions of taxpayer dollars.  Those dollars must be spent in the best interest of the taxpayers, representing their beliefs and values.  Canada's defence budget should not be spent propping up a volatile figure like Donald Trump.

If Trump wishes to coerce Canada into increasing its military budget, we should send a clear message by doing so, but spending that money elsewhere.  Sure, it may be passive-aggressive, but is that not part of our cultural identity?