June 01, 2016
To F-35 or not to F-35-that is the question:Whether 'tis nobler in the mind to sufferThe high operating costs and low availability rate,Or to take arms against the American Military Industrial Complex,And, by opposing, send them a clear message. To choose, another-No more-and buy another jetThe setbacks and the overwhelming costsBut stealth is needed and "Fifth Generation"Devoutly to be wished.


After a long (but not by Canadian standards) process, Denmark has chosen the F-35A Lightning II to replace its aging fleet of F-16s.

When one takes a closer look as to why the F-35 was chosen, it becomes clear that something was rotten in the state of Denmark.  There is likely a very good reason why Saab bailed out at early stage. This left the JSF, the Typhoon and Super Hornet as possible contenders.

Some Danish pilots have gone on the record favoring the Super Hornet.  The reasoning is simple.  The "Rhino" is affordable, robust, and has a proven track record.  However, Boeing was informed to limit its bid to include only two-seat F/A-18Fs.  This should be seen as a red flag.  Two-seater aircraft, while useful for training and high-workload tasks have a penalty of higher weight and higher costs.

Denmark's evaluation then criticizes the Super Hornet's operating costs would be higher because of its two-seat nature, stating:

...the Super Hornet is a two-seat aircraft, which implies a greater need for flight instruction hours and training of crews than the Eurofighter and the Joint Strike Fighter.

It should also be noted that Eurofighter was not directed to provide two-seat Typhoons, even though such a beast is available.

Not only that, but Denmark insisted that Boeing provide more airframes.  Whereas Lockheed was asked to bid 28 F-35s, it insisted Boeing provide 38.  The reasoning behind this was to make up for the fact that Super Hornets are rated for a 6,000 hour life-cycle, while the JSF is rated for 8,000 hours.

This would be sensible were it not for two things:

First, the Super Hornet's 6,000 hour lifespan is certainly underestimating things.   This is a robust aircraft designed for landing on carrier decks and being exposed to salt-air for all of its life.  The F-35A, on the other hand, is a land-based aircraft.  Given the F-35's history of "re-baselineing", it is reasonable to assume that 8,000 hour lifecycle may be an overestimate.

Second, the land-based Eurofighter Typhoon, which has the same 6,000 flight-hour lifespan as the Super Hornet, needed to provide estimates for 34 aircraft.  If anything, the Typhoon's and Super Hornet's numbers should be reversed to account for the Super Hornet, 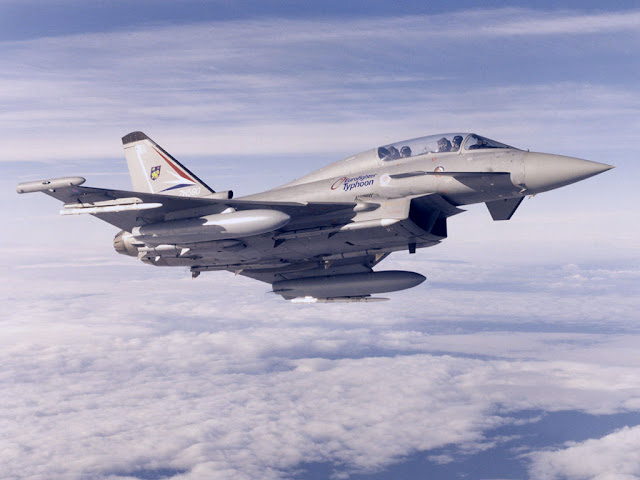 As if insisting each bid follow a different set of rules was not bad enough, Denmark's fighter evaluation devolves further when it comes to risk and cost assessments.

The evaluation gives the JSF glowing marks in the categories of "Survivability", "Mission Effectiveness", and "Future Development" while the Super Hornet and Typhoon practically tie (I would argue that the Typhoon should be scored much higher).

What stands out is Denmark's scoring of "Candidate Risk" in which the JSF is shown to be just between the Typhoon and Super Hornet, with the Rhino just edging out the F-35.  How can the JSF, an aircraft beset by problems and not yet in operational service, nearly tie the USN's workhorse for risk?  How can it beat the Typhoon, an aircraft that has already seen combat?

It is in the area of procurement cost that the report enters near-lunacy.

The estimated unit cost for a Danish F-35A comes out to $83 million.  That number simply does not gel.  Even Lockheed Martin states F-35A cost "may" drop to $85 million by the end of the decade, but this is a best case scenario.  The reality is far more sobering.

To add insult, Danish estimates put the F/A-18F's unit cost at a staggering $122 million each.  This despite the fact that The Pentagon lists it as $78 million.  Where is that $44 million difference coming from?  According to Boeing, Denmark insisted on including five years worth of sustainment and training costs for the Super Hornet, but not the F-35A.

Unsurprisingly, Boeing has lodged a formal protest regarding Denmark's decision.  It states that Denmark's cost and pricing estimates are "puzzling" and questioning why its evaluation was based using only two-seat aircraft, as well as needing 10 more of them.  Boeing also believes the Super Hornet should be able to reach 9,500 flight hours in Danish hands.

Of course, if the Super Hornet was evaluated based on the fact that it cheaper and longer-lived than the F-35A, there is a very good chance the JSF might have lost the evaluation.

This above all: to thine own self be true...  But fighter evaluations are fair game for bullshit.