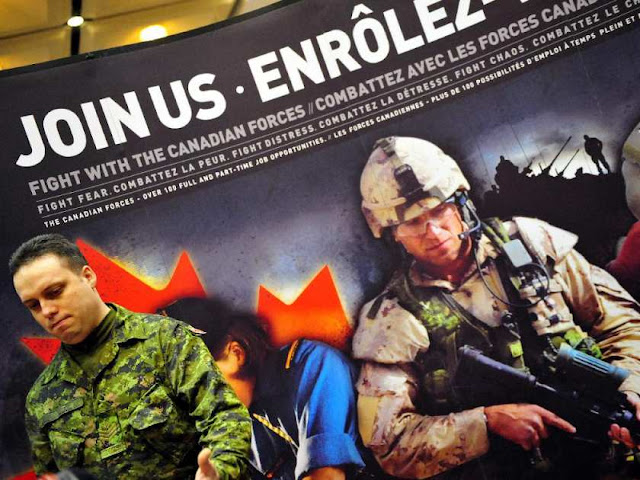 Before I wade neck-deep into the murky waters of Canada's future defence policy, I would like to make one thing VERY CLEAR:  I am not, nor ever have been, a military expert of any kind.  My forays into miniature wargaming led to more losses than wins.  I am not particularly good at chess.  Even my paint-balling skills leave a lot to be desired.  Please keep in mind that there is a real possibility that I have no idea what I am talking about.

Also, I will attempt to avoid getting into specifics.  Doing so would not really help, and bogging things down with numbers would be pointless anyway.

While I will attempt to answer the "Key Consultation Questions", I will do so using my own set of guidelines to avoid any wishful thinking or unrealistic expectations.  These are:

While it would be nice to see Canada meet the 2% of GDP target set out by NATO, the chances of that actually happening are slim.  Realistically, Canada might reach 1.5% in the distant future.  In the short term, anything over 1.2% seems unrealistic.

Canada's military needs to be Canadian.

Canada's military needs to stop pretending to be a smaller version of the USA's, or even Britain's.  What works for superpowers and former empires does not necessarily work for us.  We have a smaller population, smaller budget, and a larger nation to protect.  We also have a diverse population made up of many separate cultures.  Our military should reflect that.

We cannot, nor should we, depend on the USA.

The tumultuous start to the 2016 American election should make one thing abundantly clear:  American politics have changed.  With that, we can no longer take our southern neighbors for granted.

A presidential candidate has gone on the record stating that "NATO is obsolete" and that partner nations are “not paying their fair share”.  Irregardless of what happens next, this should be taken as a sign that change may be on the horizon.  We can no longer depend on the current status quo.

The Cold War is over.  The potential for large scale conflicts between superpowers is almost nil.  Thanks to a global economy, potential adversaries have become valuable trending partners.  Any aggression can simply be quelled by crippling financial sanctions instead of military intervention.  Full-scale war with Russia is unlikely since it provides much of Europe's energy needs.  Full scale war with China is unlikely because they build all our smartphones.

With all that in mind, here are my answers: 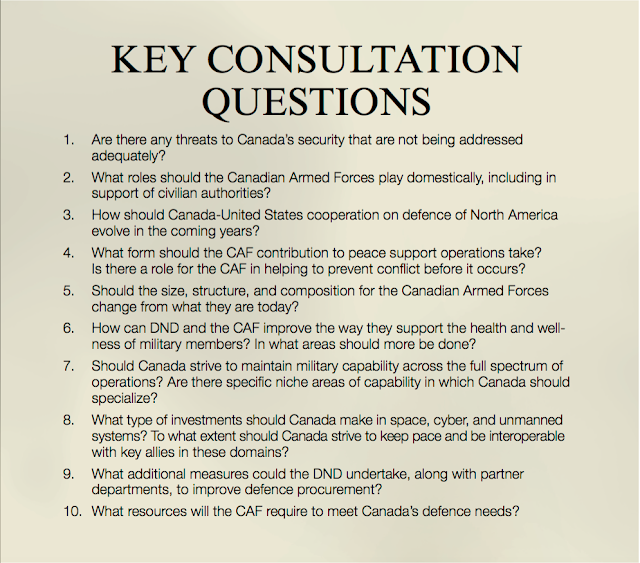 1.  Canada's military is still mostly held over from the Cold War mentality.  As such, there is still too much emphasis on fighting a traditional large scale conflict.  More emphasis should be placed on small scale, "rapid response" assets that can respond faster and to more locations.  Speed should be emphasized over strength.

Moreover, Arctic operations needs to be aggressively stepped up.  The North is one of Earth's last great frontiers, filled with valuable resources.  If Canada wants to stay relevant, we need to stake our claim.  Year-round arctic capability needs to be established and maintained.

3.  Canada needs to take more ownership of its own defence.  While Canada should continue to cooperate with the USA, it should no longer take that relationship for granted.  We should also try to differentiate ourselves by providing capabilities that the US military lacks instead of simply providing "more of the same".

4.  The CAF should contribute by providing rapid response capability.  This would take the form of small, integrated force teams that are able to mobilize on short notice to just about anywhere in the world.  These teams would be capable of operating from an austere base with limited logistic support.  They would only need to remain for a short amount of time until a larger-scale (i.e.: American) force can arrive.  This would be similar to the USMC's mission statement, but Canada should strive to be even faster.

Think of it as the Canadian Forces providing a "stitch-in-time" capability, keeping an aggressor from obtaining a foothold in a region.  While other militaries may be able to provide more brute force, larger forces need more time and resources to set up a forward operating base.

Once again, some inspiration can be found with the USMC, where "every marine is a rifleman".  Not to be taken too literal, but the CAF should strive to reduce its number of civilian ranks and expand its reserve and full-time ranks.  We should also look into recruiting into more non-traditional positions like the Canadian Rangers.

6.  Obviously, the best way to support the health and well being of its military members is to avoid senseless conflict.  It should be made very clear that the members of the Canadian Forces joined out of a desire to protect their country, not someone else's.  Combat action spent abroad should be kept at a minimum.

Also, after the fighting is done, members need to depend on the nation that depends on them.  Any and all injuries or ailments suffered whilst on duty should qualify for lifetime medical coverage and assistance.

7.  Since Canada can be described as having predominantly "austere" geography, it only makes sense that our military reflect that.  Concentrate on being able to operate from areas with limited infrastructure.

8.  Much like the rest of my recommendations, investments in space and unmanned systems should focus on boosting arctic sovereignty.  Satellites to monitor Canada's norther territory, as well as UAVs (instead of manned aircraft) to patrol the sky.

Cyber operations should be greatly enhanced as part of NATO/NORAD cooperation.  Modern-day threat rarely concern themselves with borders, so working with our allies is important in this area.

9.  Current military procurement is a mess.  To streamline and improve the process we need to buy "off-the-shelf" solutions whenever possible.  Preferential treatment should also be given to assets that can perform multiple roles (i.e.: a FWSAR that can operate as transport and a tanker).  Flexibility is key.

We also need to take a "long-view" approach when procuring new equipment.  Currently, Canada waits until the last minute before implementing a strategy to replace aging equipment.  This puts us in "panic mode" where we spend too much money on maintaining old equipment whilst simultaneously delaying buying replacements.  Instead, Canada needs to set fixed upgrade paths, re-evaluting and upgrading assets as needed.

10.  More than anything, Canada needs to stabilize its defence budget.  While the NATO-mandated 2% of GDP may be unrealistic, we should at least strive to keep it at or around 1.5%.  Most importantly, we keep it there.

Military budgets SHOULD NOT be left to the whims of politicians promising to balance the Federal Budget.  DND funding should be sacrosanct. 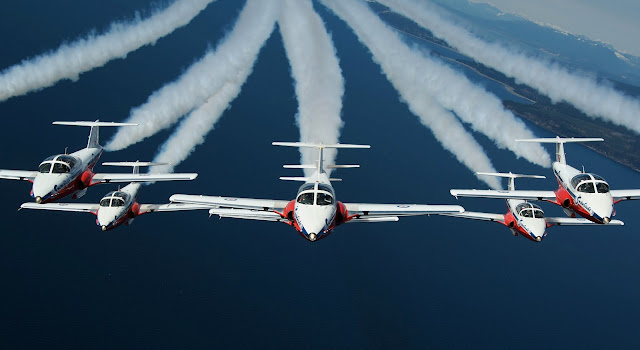