February 20, 2016
There is an oft repeated trope that Canada requires a twin-engined aircraft for "safety reasons".  Some even go so far as to rule out any single-engine fighter as a replacement for Canada's CF-18 Hornets.

This blog has examined the issue before.  While it certainly is not an unfounded opinion, modern jet engine reliability has rendered the argument all but moot.  Both the RCAF and the Government of Canada seemed to agree when they made the infamous decision to sole-source the F-35 Lightning II. When the current Trudeau government campaigned on the promise to cancel the JSF purchase, it was on the grounds of cost, not safety.

There are still those that lack confidence in a single-engine layout, however.  Perhaps a stronger argument needs to be made.

The best way to make a comparison is to eliminate as many variables as possible.  In this case we will examine two fighters that perform similar roles for a similar service.  Conveniently, they also happen to share common engine designs that have seen multiple changes over the years.  It also helps to have a large sample number.

For our purposes, we will examine both the F-15 Eagle and the F-16 Fighting Falcon as used by the USAF.  While the exact roles of each fighter differ somewhat, they are similar enough.  Depending on variant, both models are used for air-superiority and strike roles.  Both fighters have also benefited from the "Great Engine War" of the 80s.  Instead of offering up a single contract, the Pentagon encouraged competition between General Electric and Pratt & Whitney.  This led to jet engrnes that were more powerful, more efficient, and more reliable than their predecessors.

Throughout the years, no less than three different engine variants have seen use in the F-15 while the F-16 has seen five different variants constructed by two different manufacturers.  This gives us a respectable sample size.

Information on USAF "engine-related mishaps" can be found here.  For those unfamiliar, a "Class A" mishap is defined as any event that results in a loss of life, permanent disability, or over $1,000,000 damage.  (Given the cost of jet fighter, this does not have to be much...) 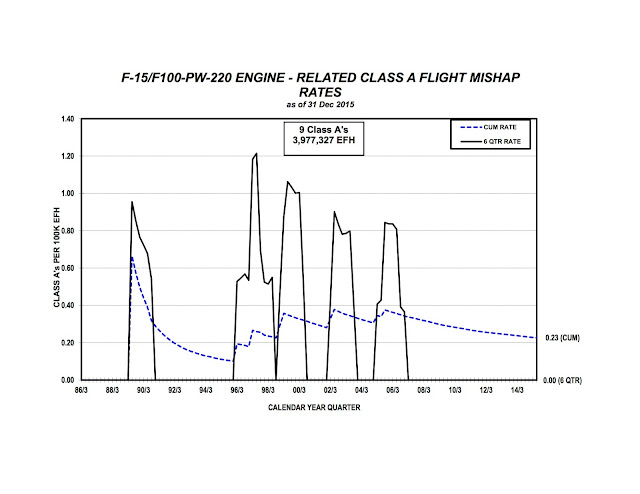 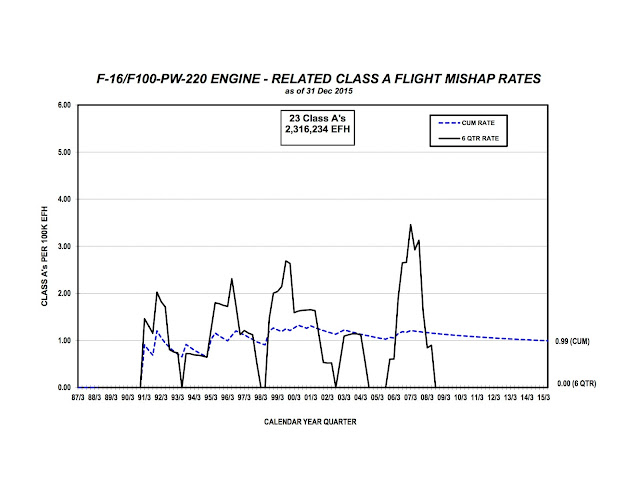 First we will compare the Pratt & Whitney F100-PW-220 engine.  As you can see from the graphs above, this engine was first used in the mid-80s. 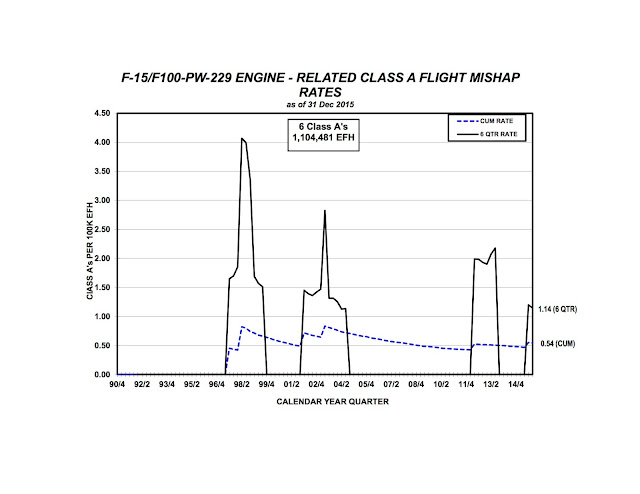 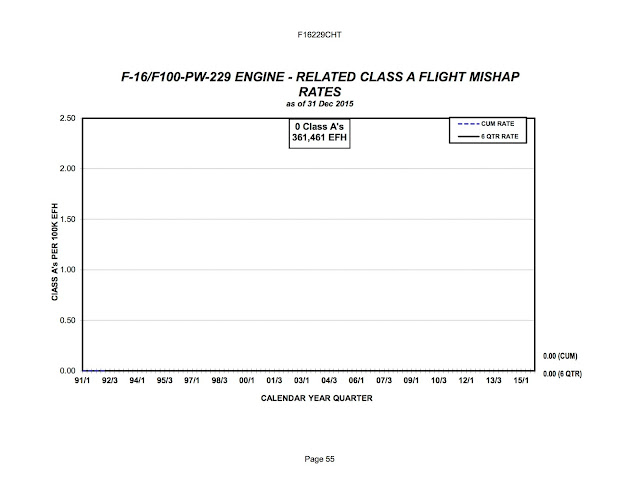 Above are the stats for the newer F100-PW-229.  At first, it may appear as if the second table is incomplete.  There is no error, however.  In the single engine F-16, there has not been a SINGLE engine related Class A incident in over 360,000 flying hours.  To put that into context, that is the equivalent to 45 aircraft living out an entire lifetime of 8,000 flight hours.

The F-15 has a worse record with the new engine, but this could be partially explained by its use in the F-15E Strike Eagle, an aircraft that performs a different role than the air-superiority focused F-15A-through-D.

Canada is considering 65 aircraft, each expected to live out 8,000 flight hours (possible more).  That accounts for a grand total of 520,000 flight hours throughout the lifetime of the fleet.  Even using the worse-case scenario of the F100-PW-229, that leave a mere FIVE Class A incidents to be extrapolated.  (Remember, a "Class A" is anything over $1,000,000 damage)  Given the trend that newer, more modern engines tend to be safer, it is safe to assume that the number could be less than this.  The chance of actually losing a human life due to engine failure would seem to be even more remote.

On a related note, the single-engine Saab JAS 39 Gripen has yet to have a single incident related to engine failure.

Putting this into more perspective, at least two of the 18 CF-18 losses throughout the years can be attributed to engine failure.  As much as some would like to believe that a second engine allows for redundancy, the truth is that twin-engine fighters require the power of BOTH engines to operate properly.  While it may be possible to "limp home" on one engine, this is not always the case.  The very act of one engine having a catastrophic failure may be enough to take out the other.

Is there an added risk to pilot lives flying a single-engine fighter?

Possibly, but there comes a point when that added risk is no longer significant.