It comes around on a seemingly regular basis.

Either here, in the Facebook group, or some other media; someone will spout off that golden nugget that attempts to put a nail through everything I and others like me have tried to do over the last few years.  That nugget reads like the following:


Those close to the F-35 program sing its praises.  Its critics are those who have never flown on it or worked on it.

It raises an interesting point.

Why trust a random blogger over test pilot who flies the aircraft?  Why trust a scathing aviation reporter when official press releases are saying everything is tickety-boo?  What does it matter to us, anyway?  It isn't as if we will ever fly this airplane. 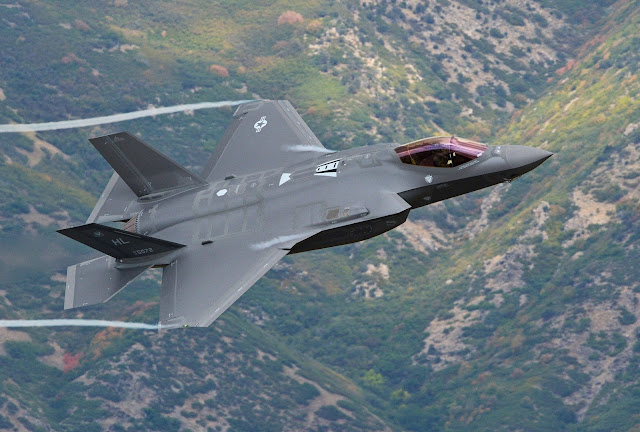 While it is true that us aviation enthusiasts, bloggers, critics, and other layman are not as "connected" with the program as the pilots, executives, and politicians anchoring their careers to the JSF, there is a very large difference between them and us.  A difference that often goes unnoticed in all the rhetoric.

We are the ones paying for this damn thing.

It is not the military, the government, or the primary contractor (Lockheed Martin in this case) that is the largest stakeholder.  It is the general public, Mr. and Mrs John Q. Taxpayer are the ones picking up the tab.  They are also the ones who will depend on this machinery to defend their freedom.

The JSF is far from the first military project to blow its timeline and budget.  In fact, missed deadlines and red ink seem to have become acceptable over the years.  So much so that it is actually noteworthy when a project does deliver on-time and under budget.


So what makes the F-35 any different?

Simply put, it is a matter of scale.  The JSF is the largest, costliest military procurement project to date.  At almost $1.5 trillion (US), the F-35 makes the $45 billion B-2 bomber project cost seem like a footnote.   It puts the $209 billion space shuttle program to shame.

The massive scale of the F-35 program raises the stakes.  Even minor problems can end up costing the taxpayer millions of dollars.  Bigger problems can cost in the tens, or hundreds of billions.  Worse still, since the JSF is intended to replace the vast majority of the western world's fighter fleet, program delays increase the wear-and-tear on the older fighters it is meant to replace, increasing their operating costs.

Still, would it not be easier for us to simply let those in charge do their job?

Well, maybe if we had any faith in those people, but a history of greed and incompetence have made the public wary.

Military procurement is big business.  The world's largest economy (USA) spends the 20% percent of tax revenue on defense.  At about $718 billion in 2011, the USA's defense budget was more than half of Canada's entire gross domestic product (GDP).

Big business and big government spending leads to a "revolving door" where former government and military officials find high-paying work at the very corporations they were once tasked to oversee.  We are assured that everything is on the up-and-up...  But c'mon.

The military-industrial complex has provided us with some real doozies.  A fighter jet isn't just a fighter jet anymore; it's a also a jobs program.  This means that even the most asinine projects are funded well beyond their usefulness.  The C-17 Globemaster III, for instance, has seen its production artificially extended thanks thanks to the whims of US congress rather than the USAF's demand for more cargo aircraft.  As of April of this year, five C-17s remain unsold.


Then there are the worst-case scenarios when bureaucracy conspires to turn a rather straight-forward project into a comedy of errors.

The Bradley Fighting Vehicle was meant to provide the US Army with an armored personnel carrier (APC) with enough firepower to defend itself as well as enough speed to keep up with the M1A1 Abrams main battle tank (MBT).  Attempts to increase the Bradley's versatility led to a machine that failed to deliver on its primary purpose of delivering troops.  Instead of carrying 11 troops like its predecessor, the M113, the Bradley only carried 6.

The Bradley Fighting Vehicle has gone on to see a distinguished career, thanks partially to its bewildering number of variants.  Despite the Bradley's success, it never did work well as a troop carrier.  In fact, the M113, the APC it was meant to replace, still serves as the US Army's predominant troop transport.

The Bradley Fighting Vehicle's saga does not end there, however.  Live fire testing was manipulated to provide a more favorable result, replacing its explosive ammunition stores with cans of water.

The story of the Bradley's development was featured in the book The Pentagon Wars: Reformers Challenge the Old Guard.  This was later developed into a movie comedy (what better way to represent military procurement and development) of the same name (The Pentagon Wars).

Here is a clip, explaining the evolution of the Bradley Fighting Vehicle.


The entirety of The Pentagon Wars can be seen here, free on YouTube.  It is well worth the watch.

Many times, those closest to a program are the least likely to criticize it.  Their career may be on the line, or they might just be to closely involved to see the "big picture".

Throughout the years, the military procurement process has been littered with examples of spending run-amok.  When the tax-paying public is being told that "everything is okay", we have reason to be suspicious.  We demand more than slick PR campaigns and condescending platitudes.

We demand value for our tax dollar.

We demand the truth.