Shortly after Liberal leader Justin Trudeau announced that his party would scrap the F-35 purchase and hold a competition to replace the CF-18, the other two leaders have (somewhat) clarified their position.

Much like Trudeau, NDP Thomas Mulcair would start a competition.  Unlike the Liberals, the NDP would include the F-35 in the process.  Mulcair took the opportunity to add some campaign rhetoric, slamming Trudeau for disqualifying the F-35.

I will note here that Mulcair and the NDP have (quietly) announced that their position aligns itself with what you will see on this blog.  That is, if the F-35 is to be chosen as replacement for Canada's CF-18s, it should do so based on its own merits and suitability for Canada. 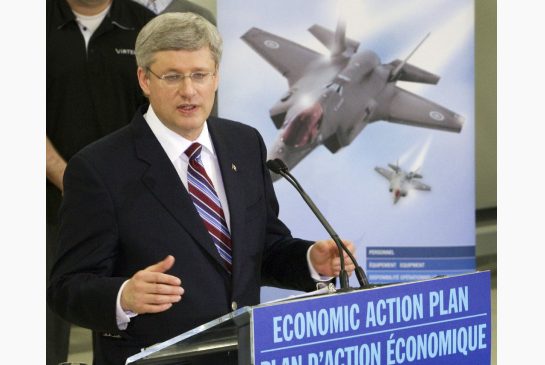 Harper lambasted Trudeau's position, implying that pulling out of the JSF program would "crater" Canada's aerospace industry.  This, despite the current Tory government's own on-again/off-again relationship with the F-35.

Stephen Harper's recent statements would seem to confirm what many of us have already suspected:   The Conservatives still intend to buy the F-35.  Doing so prior to the election would have been political suicide given the F-35's recent problems however.  It would seem the last few years after the "reset" has been just a means to put off the decision until it was more politically palatable.

At present, JSF-related contracts account for less than 2.3% of the Canadian aerospace industry's current revenue.  While those involved fear the worst, Frank Kendall, the US Secretary of Defense and Acquisition, stated that Canadian firms would not lose work since they offered the "best value".

Harper's claims would seem to be "A lot of baloney".