The 2015 election season is slowly meandering forth from its cave, hungry and looking for sustenance.  Canada's three major federal parties have slowly started revealing their platforms for the upcoming election.  To no one's surprise, military spending has yet to garner any attention.

Diving into each of these parties' websites reveals very little into how much attention they would pay to Canada's long neglected military.


The Conservative Party of Canada (CPC) makes little mention of its plans for Canada's defense on its website.  It does, however, spend an entire page on "Keeping our Streets and Communities Safe".  Apparently, the CPC is more concerned about an attack from within.

If one digs around, the following blurb is found:


By rebuilding our Canadian Forces and adopting a new, values-based foreign policy, the Government is protecting Canada’s sovereignty and advancing our national interests on the world stage. Guided by our foundational values – freedom, democracy, human rights and the rule of law, Canada is now asserting our sovereignty in the Arctic, pursuing new international free trade agreements and strengthening our contributions to global security, most notably through the mission in Afghanistan.

I am not exactly sure what a "values-based foreign policy" is, nor am I sure exactly how Canada has been asserting our sovereignty in the Arctic.  Russia has made itself much more clear in that department.

One can make the argument that the CPC can simply rest on its pro-defense reputation.  It would be a poor argument, however.  Since coming to power over nine years ago, the CPC has continued to cut procurement spending.  It does promise, however to boost spending in 2017 (if re-elected).

Looking at the CPC's last nine years in government, it seems that the governing Tories are all-hat and no-cattle.  Flashy press conferences are held announcing this-or-that, but when it comes time to sign a cheque, things are put off indefinitely...  Again and again.  There have been a few bright spots, like the acquisition of several C-17 Globemaster IIIs, but this seems to be more of an exception, not the rule.

There is also that slight problem of cutting veterans' benefits...  While spending more on parades meant to honor them.

The Liberal Party of Canada makes it very clear:  They do not like the way the Harper government has handled things.  Some very prominent members of the party, like Marc Garneau and Stephen Fuhr, are outspoken critics of the F-35.  When it comes to their own policy, thing become a little more muddled, however.

The LPC's "Foreign Affairs & Defense" page is prominent on their website, but makes little mention about procurement strategy.  It does mention veterans, however:

Liberals will ensure that no veteran will have to fight the government for the treatment and compensation they have earned by putting their lives on the line for this country.

We commit to re-opening the 9 Veterans Affairs Service Offices closed by the Conservative government.

The LPC may wish to define their commitment to military spending a little more, since their reputation in that regard has been tarnished by the "Decade of Darkness" that defined the Department of National Defense during the Chretien government.  In an effort to balance the federal government, the DND's budget was slashed and purchases cancelled.  This penny-pinching attitudeled to purchases like the Upholder/Victoria-class submarines, not exactly a high point in DND procurement history.

Oddly enough, it was not the election of a new government that ended the "Decade of Darkness", merely a new leader.  It was the same Liberal government under Paul Martin that raised military spending, albeit slightly.  It also selected the CH-148 Cyclone to replace the venerable Sea King helicopters.  (Wonder how that turned out?)

There is also the fact that much of Canada's current military hardware, (CF-18s, CP-140s, Halifax-class frigates, etc.) were purchased during the time of Pierre Trudeau.  Then again, this was during the height of the Cold War, when high military spending was all the rage.

Oddly enough, the NDP's stance on military funding is emphasized on their website in far greater detail than other other major Canadian political party.  Almost two full pages of their "policy book" (available here, look for section 4.6 on page 19) are dedicated to it.

While the majority is dedicated to veterans and their rights and privileges, there is some mention of keeping hardware up to date, specifically:
Given that the NDP have never formed a federal government, there is no way to judge them on past performance.  While there does seem to be a tendency to view them as "granola-eating-hippies", there seems to be little evidence to support or deny their support for the military. 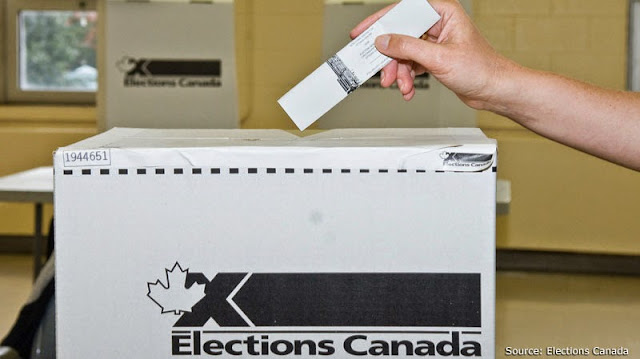 So which party is best for Canada's military?

Damned if I know.

To put it frankly, like many Canadians, my vote will be for the party that best represents my own personal views on a number of issues.  I do place Canada's defense high on that priority list, but right now there seems to be very little to differentiate the parties in that department.

As the election season ramps up, that is very likely to change.  When it does, I will try to report on it here.

I know politics can be messy, and I will do my best to remove my own personal bias...  At least until the end.