Catching up with JSF news.

Once again I have to apologize for my lack of posting lately.  The holiday season is always a busy time of year for me, and this year the chaos has been upped to the nth degree.  There is light at the end of the tunnel, however.  Hopefully, the new year result in things going back (relative) normal.

In the meantime, I want to thank everyone for participating in the "What if" series of questions.

There has been a lot going on with the JSF in relation to Canada, however, and I would not feel right if the latest developments went unnoticed.

So lets get to it, shall we?

It all started when the USAF released photos of F-35 refueling trucks.  Instead of the usual olive drab, the tanks were painted shiny white.  Why?  Because the JSF uses its onboard fuel as a method to cool its various systems.  Imagine if the radiator in your car held fuel instead of coolant.  Instead of cooling just the engine, this fuel also cools all the various electronic systems throughout the aircraft as well.

As you can imagine, fuel that has been sitting in the sun on a hot tarmac for hours tends to gain a little heat.  Using warm fuel as a coolant is counter-productive, so the USAF has decided to repaint its fuel trucks that shiny white in order to mitigate things.  The cost?  $4,000 per truck.

Given Canada's climate, we should not worry too much...  As long as we don't send fighters anywhere warm.

The Netherlands has already been forced to cut its F-35 order down to 37 (from 85) in order to fit within its $6 billion acquisition budget.  Now it turns out a small fleet will result in higher than expected operating costs.

It really doesn't matter what we pick.

According the the recently released "Evaluation of Options for the Replacement of the CF-18 Fighter Fleet, any of the four fighters studied (Super Hornet, Rafale, Typhoon, and JSF) would do just fine protecting Canada's airspace.

A sizable 90% of Canada's fighter missions occur over North American airspace.  Breaking it down even further, 80% of CF-18 flight hours involve protecting sovereign Canadian airspace.  For the mission of "Defence of Canada" all fighters were deemed "Low to Medium risk" well into the "Beyond 2030" timeframe.

In fact, all of the fighters scored pretty much the same for the majority of missions.  The only stand-out was in the "State-on-State War Fighting" a category that Canada is unlikely to be facing by itself. 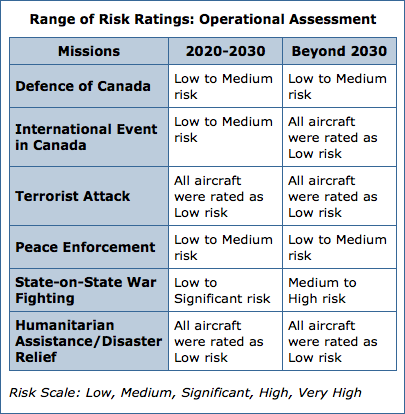 The report does not go into detail about which fighter scored better than others.  Oddly enough, all but the F-35 may be out of production by the time Canada finally gets around to replacing its geriatric Hornets.  But the Gripen will.

The report is fairly lengthy, yet does not go into specifics about capabilities or costs.  I will be covering it in depth in the weeks coming up.

Lockheed Martin ripped off its own employee's pension funds.

Lockheed Martin has settled a $1.3 billion dollar lawsuit that claimed it shortchanged its workers' pension plans.  It turns out that excessive fees made for a lower return on investment than if the workers had invested privately.

The whole point of pension plans is that they typically offer less risk and higher returns than private investing.  Otherwise, what's the point?

The Liberal Party of Canada is looking very anti-JSF.

If you have any doubts where the Liberal Party of Canada stands on the F-35, look no further.  Former CF-18 pilot Stephen Fuhr has announced that he is running as the Liberal candidate for Kelowna-Lake Country.  Not only that, but Fuhr will also join Justin Trudeau's foreign policy team.

Fuhr has been an outspoken critic of the F-35 for Canada.  Astute readers will recognize his name from the video I posted last month.

Fellow Liberal (and astronaut) Marc Garneau has also spoken out against the F-35 acquisition.  Other prominent Liberals seem to be well on their way to making the JSF an election issue next year.

The New Democrat Party seem to be quite anti-JSF as well, calling for an "open and transparent tender process".

It looks like the F-35's fate in Canada could be decided during the next federal election.

[NOTE:  I do not like going political, but there is simply no ignoring what is going on.  The Conservative Party of Canada (CPC) are clearly trying to avoid F-35 controversy while covertly going along with troubled program.  It is hard to fly a $46 billion dollar defense acquisition under the radar, however.  This WILL be an election issue.]