August 21, 2014
While the F-35 program continues to stumble along at a snail's pace, progress towards the UCLASS (unmanned carrier launched airborne surveillance and strike) has progressed rather quickly and cleanly.  This was demonstrated recently when Northrop Grumman's X-47B Pegasus demonstrated its ability to operate alongside other aircraft types aboard an aircraft carrier.  Meanwhile, problems with the F-35C's tailhook has delayed carrier testing until later this fall.

On September 10, the Pentagon will decide the ultimate fate of the UCLASS program.  Given the X-47B's successful testing, it would seem foolish to simply give up on the concept.  In little over three years, the X-47B has proven itself.  Its performance has been so consistent that testing has actually been cut short for the simple reason that the UAV has nothing left to prove.

How has the Pegasus fared so well when other modern military developments have been stuck in quagmire?

Believe it or not, simplicity.  Despite being an autonomous, stealthy UCAV that looks like something out of science fiction; the X-47's design is rather simple.  No STOVL variant, no attempt to fill multiple niches, no reliance on unproven technology.  The engine is a non-afterburning variant of the P&W F100 found in the F-15E Strike Eagle.  Even its stealth design is relatively low risk, given Northrop Grumman 's past experience.

The USN seems to be downplaying the X-47B's success, however.  It insists that the "UCLASS is not the next generation strike fighter."  True enough.  While there is much talk about UCAVs replacing manned fighters, the technology just is not there yet.  Better to start small and prove itself capable of light strike duties and reconnaissance first.  Attempting to be too ambitious might scare away some backers. 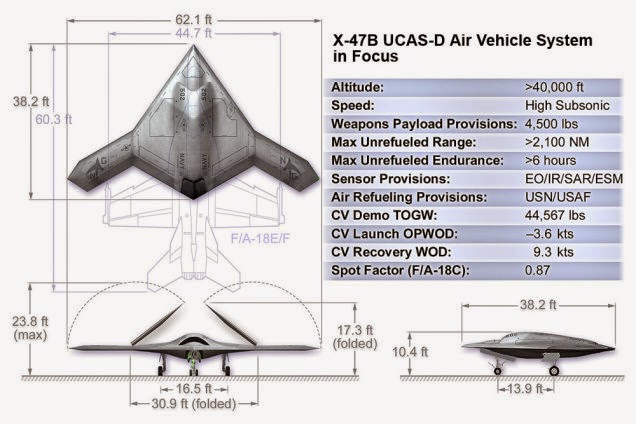 Then again, maybe some are afraid to state the obvious:  A mass produced X-47 would make many of the F-35's capabilities irrelevant.

Notice the "Weapons Payload Provisions" in the table above?  The X-47B carries roughly the same internal weapon load of the F-35A and B models.  Its range is far beyond the JSF's 1,200 nautical miles.  Its tailless, flying wing design is almost certainly stealthier.  It lacks air-to-air capability and supersonic speed, but these traits are not needed in a strike aircraft akin.

Part of the F-35's raison d'être is to operated in contested airspace defended by advanced defenses.  If that is the case, then why not utilize the X-47 instead?  It would be stealthier, likely far cheaper, and capable of knocking out air defenses without risking a pilot's life.  The X-47 makes more sense in the high-threat strike role.  The F-35 will simply have to rely more on fulfilling its air-superiority role.

I have praised simple yet highly effective aircraft before.  Whereas the JSF was envisioned in much the same way as the disastrous TFX, the X-47B attempts to be little more than a stealthy, unmanned A-4 Skyhawk.

UCAVs are undoubtedly the future.  This future may come about faster than we think.
F-35 UAV UCAV UCLASS X-47B