[RANT:] BRING ME YOUR SNARK! 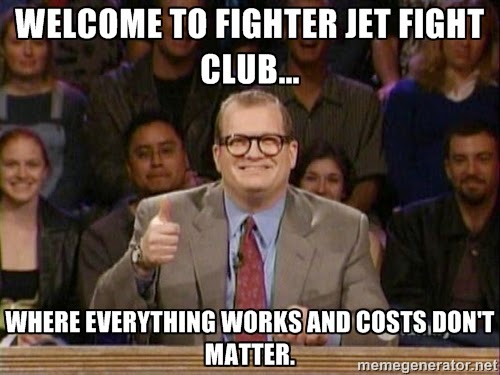 Judging by the e-mails and comments, I can declare Friday's installment of "Fighter Jet Fight Club" another rousing success.  In a nutshell, most assumed that I had lost my dang mind.

I even got a (dishonorable) mention on Eric Palmer's blog.  Check it out here.  Mr. Palmer states that I  "just don't get it" because I have the audacity to declare the F-35 ever so slightly better than the F/A-18E/F Super Hornet...  If you do not account for cost differences and the JSF finishes its development without any more hitches.  Mr. Palmer was not alone in his indignation.

How dare I declare the JSF anything else but a pile of excrement?


That is it.  Nothing deeper than that.  A true comparison would take months of study evaluating all the risks, costs, and upgrade paths.  It would require a thorough threat assessment.  It would require knowledge of top secret information on various radar, flight, and weapon systems (anybody on the internet who claims knowledge of these facts is bullshitting you).

Being no more than an informed enthusiast myself, how can I pretend to compare two aircraft and declare one the winner in the span of the few hours it take me to write a post?  The first step is to keep it simple.  The second, is to eliminate the biggest variables.

My chosen scoring system (found here) is as simplistic as they come.  4 points for ground pounding, 4 points for air-to-air, and 2 points for "other".  This gives a good all-around fighter (like the Rafale) a chance against a single purpose machine (like the F-22).   If you believe that more emphasis should be placed on one category or the other, feel free to modify the scores as you see fit and post them in the comments!

Why do I disregard cost?  Because it is the single biggest variable.  I cannot simply post the window sticker of a jet fighter.  Fighter purchases are wrought with support deals, offset deals, bribes, late fees, performance bonuses, exchange rates and the like.  An aircraft purchased in 2018 may be nowhere near the cost of the exact same aircraft purchased in 2020, depending on "peak production".  Cost per flight hour gets even more convoluted, with variables for number of aircraft in a fleet, the cost of fuel, even weather conditions.

Why do I assume every aircraft works "as advertised"?  Again, I am eliminating a huge variable.  It would simply be to cumbersome to attach a disclaimer to every sentence.  I do not want to write: "The Typhoon should have superior BVR capability if it gets its planned AESA radar."  or "The F-35 should have great situational awareness if they ever get the bugs out of the DAS, EOTS, and HMD."  I do this assuming that both aircraft being compared follow their current upgrade path.  This is why both the Rafale and Super Hornet suffered.  Both aircraft are facing a uncertain future when it comes to future development.

Does disregarding cost and making assumptions on future capability sway favor in the F-35's direction?  Absolutely.  Yet anybody familiar with my work on this blog or gripen4canada.blogspot.ca should know that I am no fan of the F-35.  Quite the opposite really.  So why would I intentionally give the JSF such an advantage?

Ignoring costs while simultaneously playing up planned capabilities eliminates two of the pro-JSF's crowd's favorite arguments:
Instead of denying those arguments.  I intend to face them head on and to own them.  I will consider a stealthy aircraft stealthy. I will consider the JSF's sensors to simply be the best.  I will pretend that the F-35 is no more costly than the Typhoon, Rafale, or even the Super Hornet.

I will give the F-35 Lightning II every benefit of the doubt...  Only for it to prove itself to be still underwhelming.
Eric Palmer F-35 Fighter Jet Fight Club FJFC