Last week, we compared two very similar "Eurocanards".  This week will look at two American designs.  While they fulfill similar roles, they are quite different.  One is a updated version of an old favorite, while the other is completely new.  These aircraft will be serving alongside each other in both the US Navy and the RAAF.  For this match-up, we are going to compare more common variants of each, the F-35A and the F/A-18E.

How does the old workhorse stand up compared to the new kid on the block?  Let's find out.

Interdiction:  The Super Hornet is no slouch here, especially when supported by its EA-18G Growler variant.  The F-35 has the advantage of stealth, however, enabling it to sneak through an enemy's radar defenses.  While it may not match the B-2 in stealthiness, the F-35 is the sneakiest strike aircraft in existence right now.  Advantage:  F-35.

Deep Strike:  The Super Hornet has a lot more options when it comes to extending its range.  Conformal fuel tanks (CFTs) are being developed, but in the meantime it still has the option of mounted external tanks.  The F-35 goes further on internal fuel, but external tanks are still a ways off.  Advantage:  Super Hornet, at least until the F-35 gets external tanks.

Payload:  Despite the Super Hornet being larger, with two engines, both aircraft carry similar amounts of ordinance.  The Super Hornet has the advantage of one extra pylon, but it has to sacrifice that advantage in order to carry a targeting pod.  Advantage:  Tie.

Close Air Support:  Both aircraft carry nearly identical weaponry, and operate from similar altitudes.  The F/A-18F's extra seat could be a slight advantage, but so could the F-35's more advanced HMD and sensors.  Advantage:  Tie.

Both aircraft are excellent "ground pounders".  While the F-35 has a stealth advantage, the Super Hornet better options for extending its range.  Things get a lot more complicated if you start bringing in the EA-18G Growler, as well (more on that later).  Winner:  Tie.

First look, first kill:  Both aircraft use similarly sized AESA radars.  The F-35's is slightly more advanced, however.  The F-35 also has its EOTS and DAS giving it a 360 degree view of the area around it.  On top of all this, the F-35 is a much stealthier aircraft than the Super Hornet.  Even with the proposed "Advanced Super Hornet" upgrades, the Super Hornet will never be as stealthy as the F-35.  Advantage:  F-35.  Clear winner.

Beyond Visual Range:  Seeing the enemy is one thing, knocking them down is another.  Both aircraft use the AIM-120D AMRAAM BVR missile, which has a maximum range of about 180km.  The actual "no escape zone" is significantly less (and very classified).  The closer the F-35 gets, the better chance of a missile hit.  Unfortunately, getting closer increases the chance of detection.  The F-35 pilot will have to tread a fine line, but ultimately has the advantage if they don't get too close.  The Super Hornet's best strategy here is to bring the get to the merge a quickly as possible, negating the F-35's stealthy advantage.  Advantage:  F-35.

Within Visual Range:  Once the Super Hornet pilot is able to utilize the "Mark One Eyeball", things start to change dramatically.  Once things start to turn into turning match, the Super Hornet's superior thrust-to-weight and wing loading win the day.  While the F-35 has its fancy EOTS and DAS to give a clear view all around it, they are pretty much moot at this point unless it is carrying AIM-9X Sidewinders on external pylons, greatly reducing its stealth advantage.  Advantage:  Super Hornet

Dogfight:  If the F-35 pilot finds himself in a dogfight, then something has gone terribly, terribly wrong.  While the F-35A does have an impressive 25mm cannon, it might as well be for decoration at this point.  The low-and-slow flight regime is where the Super Hornet lives.  Its legendary high AoA performance give it the proper "nose authority" to point its gun at a target easily.  If that wasn't bad enough for the F-35, its lack of visibility and fire suppression is enough to put its pilot into a cold sweat.  The delicate F-35 simply does not have the chops to stand up to the much sturdier Super Hornet.  Advantage:  Super Hornet, Clear winner.

Each aircraft is clearly superior in its particular regime.  The F-35 is clearly the sniper, taking out its enemies before even being seen.  The Super Hornet is more of a knife fighter, simply wrecking anything that gets too close.  Unfortunately for the Super Hornet, the F-35 has no need to get that close.  A smart JSF pilot will simply let its AMRAAMs do the talking, then slink back into the darkness.  Winner:  F-35.

Versatility:  The F-35 comes in three flavors, the F-35A CTOL, the F-35B STOVL, and the F-35C carrier version.  While it is always nice to have options, the B suffers from a decreased payload and range, while the C suffers from decreased performance compared to the A.  They are also a great deal pricer.  It is also strictly a single seater, so the F-35 pilot has nobody to share the workload.  Then again, the F-35's stealthiness and sensors make it a fantastic reconnaissance platform, no matter what the variant.

As for the carrier-capable Super Hornet, it would be hard to find a more versatile workhorse of a fighter.  It is available in single-seat F/A-18E, two-seat F/A-18F, or two-seat electronic warfare EA-18G "Growler" versions.  The Growler variant is capable of wreaking havoc on an enemy's radar and communication systems.  If that wasn't enough, the Super Hornet is also capable of mounting "buddy refueling" tanks, giving it the ability to refuel other aircraft.

Logistics:  Currently, the Super Hornet sees service with the US Navy and the RAAF.  While Boeing likes to play up its commonality with the legacy F/A-18 Hornet, it is almost an entirely different, and much larger, aircraft.  That being said, it is still a relatively simple, straightforward aircraft to maintain and has proven to be reliable aircraft.

If all goes as planned, the F-35 will see well over 3,000 units in the hands of at least a dozen or more operators, making it the preeminent fighter of the western world.  Parts for it will be built all over the world, and spares should be plentiful.  Then again, the F-35 development has been plagued with reliability issues and software glitches.  Such is the case when you have an aircraft composed of exotic new technologies.  Stealthy aircraft also have a habit of becoming "hangar queens" since their radar absorbent skins tend to not hold up well to bad weather.

If the JSF sold in fewer numbers, the Super Hornet would likely run away with this one.  But its numbers are impossible to ignore.  No matter where you find yourself in the world, there is likely to be a parts supply chain and other infrastructure nearby.  Advantage:  Tie. 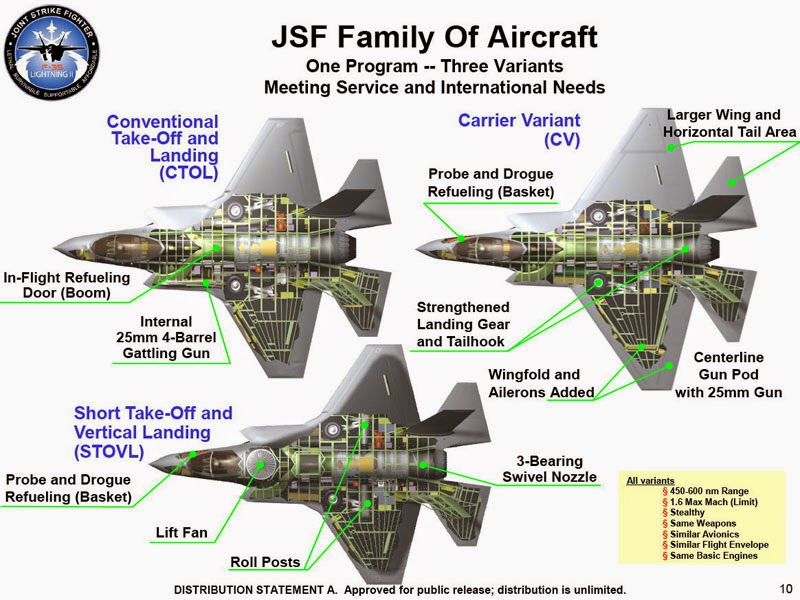 Surprised?  You shouldn't be.  The F-35 matches or exceeds the Super Hornet in a lot of ways.  While the Super Hornet does have its strengths, it is not enough to come out ahead of the JSF.  Both aircraft were built using the performance of the legacy F/A-18 Hornet as a benchmark, the F-35 just so happens to take it a little further, technology wise.

What really brings the Super Hornet down is the fact that it doesn't really have anything outstanding about it.  It is not particularly fast or agile.  It doesn't have any really cool features like IRST, stealth, or thrust vectoring.  It is just...  Generic.  It is like the Toyota Camry of fighter jets.  Completely reliable, capable, and easy to live with...  But it doesn't really stand out in any way.

Oddly enough, the F-35 doesn't stand out as much as it should.  While it compares well enough to the larger Super Hornet, its only real advantages are its stealth and better sensors.  This allows it to get the win here today, but only just.  It may be a bit of a hollow victory considering that the Super Hornet's basic design goes back to the 70s.  (Given the rules of FJFC, I won't mention that the Super Hornet is ½ the price as well...)

Comments?  Arguments?  Abuse?  Put 'em in the comments below!

[NOTE:  This post was written BEFORE the recent engine fire which suspended F-35 flights.  Given the rules I have imposed on myself for "Fighter Jet Fight Club", this recent incident has no bearing on the end result here.  Remember, all equipment is assumed to work "as advertised".  Also, pricing and costs are not focused on.]
F-35 Fighter Jet Fight Club FJFC Super Hornet