"The Plane That Ate the Canadian Military" 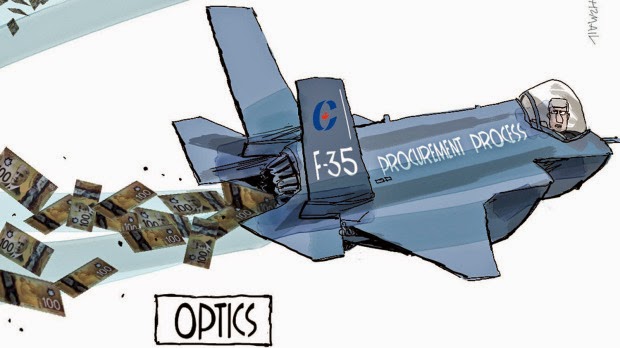 I'm not the biggest fan of the F-35 Lighting II.  I'm not convinced that it is the best fighter for Canada at this time.  It is simply too expensive, its development too troubled, and it focuses too much on the strike mission.

I will admit, however, even I was taken aback at the latest independent review of Canada's potential CF-35 purchase.  This review, released yesterday by the left-leaning Canadian Centre for Policy Alternatives and Rideau Institute, claims the lifetime costs of the CF-35 could be as high as $126 billion.  This is stratospherically higher than the KPMG report's estimate of $46 billion, and light-years away from the $16 billion originally stated when F-35 purchase was first announced.

It's important to stay skeptical when presented with evidence that uses a lot math based on estimated numbers.  While numbers are a solid commodity, The Rideau Institute itself has not supported military spending in the past.  For example, it was not in favor of DND's C-17 Globemaster III purchase back in 2007; a purchase that that few would criticize in retrospect.  Surely, any report from a left-leaning, anti-military group will be skewed towards making the F-35 purchase appear in a bad light.

But the report does raise some interesting points:


Thus far, long term F-35 operating costs have been estimated using a similar cost per flight hour as existing CF-18s.  While the F-35 was initially envisioned to have lower operating costs than legacy F-16s and F-18s, the reality thus far has been anything but.  The US Government Accountability Office (GAO) recently reported that the F-35's cost per flight hour runs in at about $35,000/hr.  Similarly, the US Department of Defense identified a cost at around $32,000/hr.  In comparison, CF-18 cost per flight hour tallies in at around $20,000/hr.  It is important to note that the aging CF-18 requires more maintenance than it did in its prime.  Boeing has gone on the record stating that newer, larger, F/A-18E Super Hornets would be about 25% cheaper to run.


The RCAF has stated that it will make up for this extra cost by flying the F-35s less, with pilots spending more time in the simulator.  While modern flight simulators are leaps and bounds better than their predecessors, they should not be considered a replacement for the real thing.

Reducing flying hours also reduces the actual usefulness of the aircraft.  It can't do anything sitting on the ground.  Attempting to reduce costs by flying less is akin to improving your vehicle's fuel mileage by taking the bus.  Sure, you save money, but you're not really improving your mileage and you start to wonder why you own a car in the first place. 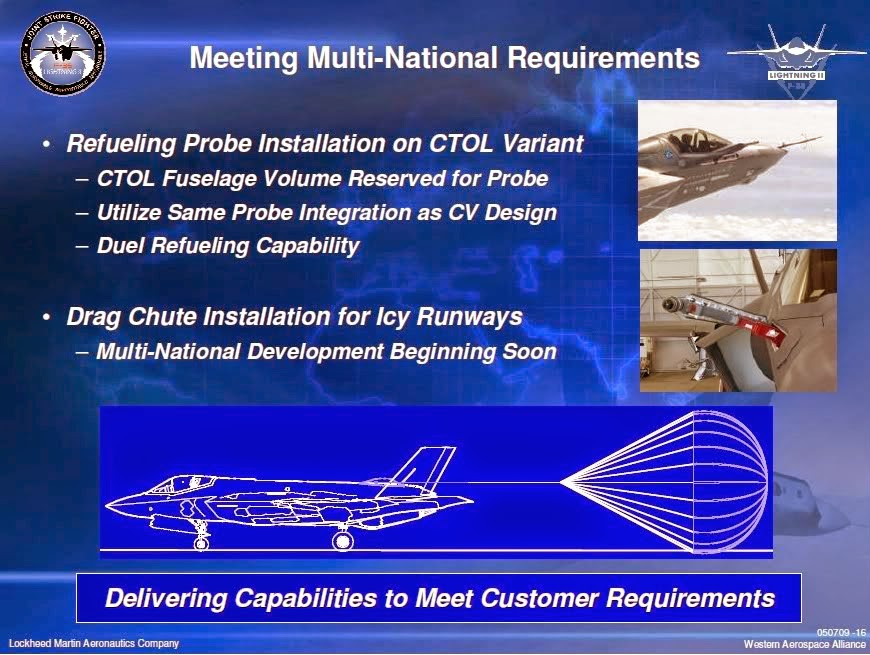 The KPMG estimate showed a relatively paltry $54 million dedicated to equipping the F-35 with weapons and countermeasures.  This is explained by the F-35's compatibility with existing CF-18 missiles and bombs.  New cannon ammunition would be needed, as the F-35 uses a 25mm cannon as opposed to the CF-18's 20mm.  The F-35 would also require new expendable countermeasures, like flares, etc.  New weapons designed for use by the F-35, like the Joint Strike Missile, would run under their own separate program and thus are not included in the JSF's operating costs.  Fair enough.

But there is more than simply equipping the F-35 with weapons to worry about, however.

First is the F-35A's lack of drag-chute or tail hook.  Without either of these, the F-35A will be unsuitable for operating out of Canada's icy runways.  A drag chute is being developed by Norway, but some state that even this will not be optimal.  Whatever the case, fitting the F-35 with a drag chute would require additional costs, not included in any report except the Rideau's.

Another issue is the method of aerial refueling, a topic that has garnered attention in the past.  Like the drag-chute, costs associated with converting Canadian F-35As to "probe-and-drogue" style refueling are not included.  Without this modification, CF-35s would be incompatible with Canada's fleet of CC-150 Polaris tankers.  They would require refueling from either allied assets or private contractors.

Also of interest, Canada will be required to pick up 1/3rd of the tab for a $650 million "Computer Programming Facility" required to deal with software intensive aircraft.  This, despite Canada not being provided with access to the F-35's computer code.

By not including these additional costs into the stated price of the F-35 program, the federal government has effectively "lowballed" estimates. 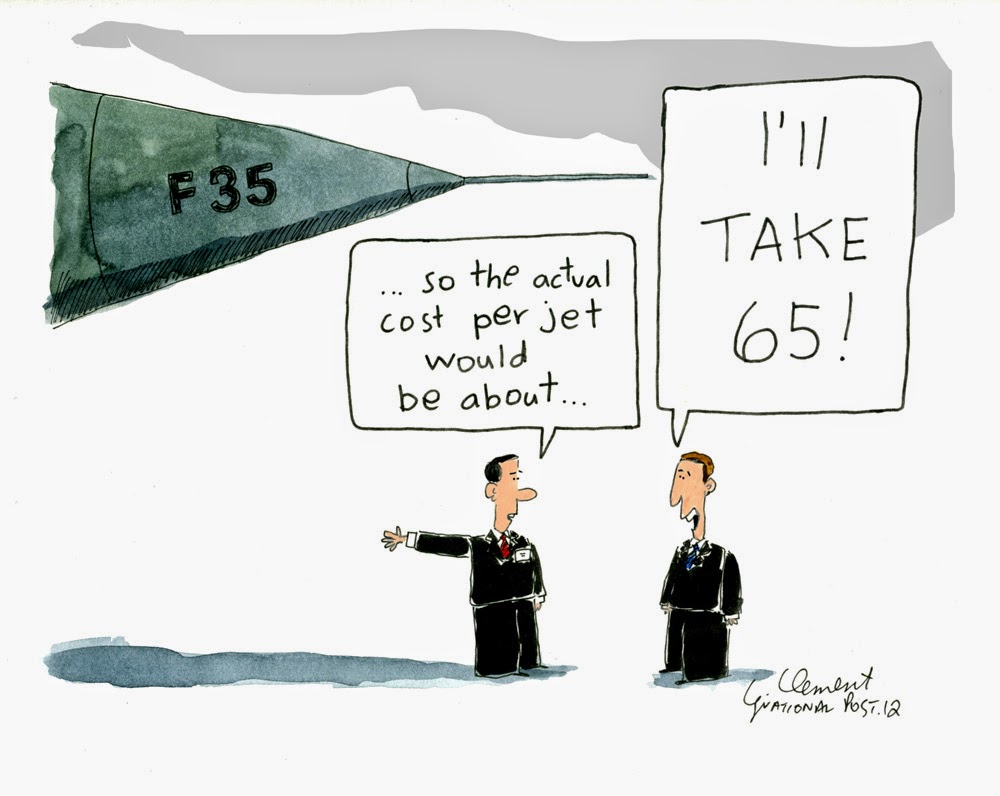 Any procurement program is going to have a certain amount of risk.  There are simply too many factors beyond anyone's control.  Inflation, fuel prices, attrition costs; none of these can be accurately predicted ahead of time.  The federal government's report on the F-35 takes a rather rosy picture, however.  It sets aside no money for attrition, and its only contingency plan against rising JSF costs is to simply buy few aircraft.  DND has repeatedly stated that 65 aircraft is the "bare minimum" required for a capable fleet.  It originally requested 80 aircraft to replace our current CF-18 fleet on a 1:1 basis.  The loss of a single aircraft or a slight rise in purchase price would result in the hard decision to exceed the budget or make do with a insufficient fighter fleet.

The F-35's current troubled development combined with decreased U.S. military spending has not boded well for the JSF's price.  While Lockheed-Martin insists the aircraft is getting cheaper, the actual numbers thus far are underwhelming.  Glaringly, the F-35's engine has actually increased in price.  It's sustainment costs are still very much in flux as well.

Without a doubt, the F-35 is still a very risky investment.  Other fighter aircraft like the Typhoon and Super Hornet would share many of the same risks, like inflation and fuel costs.  Their operating and purchase costs would be far more predictable, however.  These aircraft have already been in service for a few years and most of the "bugs" have been worked out.  All the others (Typhoon, Rafale, Super Hornet) have probe-and-drogue refueling systems, as well as being outfitted with tailhooks or drag-chutes.

Is the F-35 truly worth the gamble?

Here's the Rideau report in its entirety.