With rumors that the fighter jet "reset" process might finally be winding down soon, I thought I'd make some wild speculations as to what might happen.

I'm going to do so based mostly on political motivations, not on whether something is truly a wise choice.  The current Conservative government hasn't had it easy in the public eye over the last year, what with senate scandals, spending cuts, library closures, and other silliness.  Keeping this in mind, and the fact that an election will likely be called for 2015, I'm going to assume that 2014 will be the year that the ruling Conservatives try to appeal to their base, as well as undecided voters.  To do so, they will need to do the following.


The CF-18 replacement is going to be a big topic come next election.  It may be the big topic.  A $46 billion dollar program isn't going to go by unnoticed.  The opposition Liberals and NDP are going to bring it up at every opportunity, as well they should.  By declaring a reset, the Tories bought themselves some time, and more importantly, the image, that they were willing to take a long, hard, second look at the F-35.

So what now?  There are three obvious options...

The Tories may simply decide to go ahead with the JSF purchase, justifying it by stating that the industrial offsets are worth it and that nothing really compares to the "5th generation" F-35.  This could be a dangerous move, however, as events over the last year seem to point out that the F-35 is going to be both more expensive and arrive much later, than originally thought way back in 2010.  The likelihood of Canada purchasing 65 F-35As for $9 billion between 2017 and 2023 appears to be slim.

Needless to say, if the Tories break the bank on the F-35, while at the same time cutting the rest of the military, it won't look good.


What if they declare a competition?

A competition would certainly look good, politically.  It would also likely defer the "big decision" about which fighter to replace the CF-18 until after the next election.  This not only scores points with the general electorate but it also makes it the next guys problem, if the the Conservatives don't hold on to power.  It would also result in a very competitive bidding process as Eurofighter, Dassault, Boeing, and maybe even Saab compete to wrestle away a high profile F-35 sale.  Canada's choice could very well secure one aircraft's position as a JSF alternative.

Calling an competition may have serious repercussions, however.  First of all, it admits that the initial sole-source selection of the F-35 was a HUGE mistake.  Crow will be eaten.  Also, Lockheed Martin has been very vocal about not doing further JSF business with Canada if it backs out of the F-35 program, even if it keeps the Lightning II in the running.  Not only that, but the US government would also very much appreciate it if Canada were to stay in the program, as a further Canadian indecision could cause other foreign F-35 orders to falter as well.  You can pretty much rest assured that Washington will be placing as much pressure on Canada as possible to keep it in the JSF customer pool. 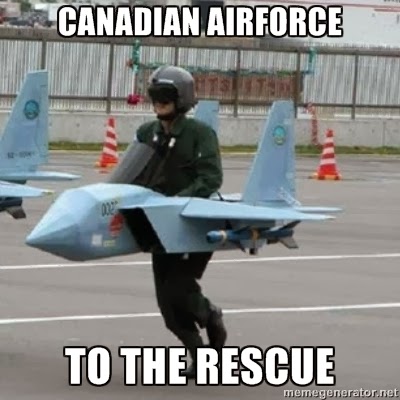 Why not just stall some more?

The current CF-18 fleet is old and busted.  Flying them beyond 2020 is going to take a lot more work and a lot more money.  Doing so would also be politically unsavory as well.  The Conservatives criticized the Chretien and Martin led Liberal governments for letting the Sea King rot on the proverbial vine waiting for replacement.  After inheriting that problem, the Tories have decided to go ahead with the over budget and overdue Cyclone, which won't be fully operational until nearly 2020 itself.  Combine that with the near nonexistent effort to procure new fixed wing search-and-rescue (FWSAR) aircraft, and the Conservatives claims of being "pro-military" start sounding awfully hollow.

So which will it be?  Perhaps there will be another option.

Canada's government could announce that, while the F-35 is looking to be more expensive than initially though, Canada still needs some in order to properly keep up its NATO duties and to keep its aerospace commitments.  Much like South Korea did, Canada will order the F-35, but in smaller numbers than the original 65 planned.  The shortfall will be met by either extending the life of existing CF-18s until another fighter can be procured to make up the difference, or Canada will hold a competition to procure a "supplementary fighter".

This supplementary fighter must be able to serve seamlessly beside the CF-35, as well as US and other NATO forces.  It must be very affordable (as far as jet fighters go) as well as be based on a proven, reliable design.  This pretty much leaves just the F-18E/F Super Hornet and the Saab Gripen. Given the current Boeing/Saab partnership, there's even reason to believe that one might bow out of the running in order to help the other's chances.  The Eurofighter Typhoon and Dassault Rafale would likely compete, but they would have a hard time competing on price.

Politically, announcing a split buy of F-35s and another fighter to be determined by competition may be the best option for the Conservative government.  It allows them to give the impression of fiscal responsibility, while still portraying a pro-military stance.  It also allows them to hold on to whatever industrial benefits Canada enjoys as a partner in the JSF program.

Will they do it?