First, there was the revelation that some JSF parts were being outsourced to China.  Then came the arrest of a Pratt & Whitney engineer attempting to sell information to Iran.  Shortly after that, a non-profit group released a report questioning Lockheed Martin's overoptimistic job creation numbers.  There was also a former USAF Chief of Staff advocating for dropping the F-35's nuclear capability, but I don't see how less nuclear proliferation is a bad thing.

If all that wasn't enough, now we find out the F-35 is still having software issues that will keep it from meeting its initial operability capability (IOC) dates.

It now looks like that timeframe will have to be pushed back another 13 months or so.

F-35's software consists of "blocks" with each block representing an incremental increase in capability.  "Block 2B", the software needed to meet the minimum requirements needed to be considered combat ready, is being declared "unacceptable" by Michael Gilmore, the Pentagon's chief weapons tester.  It should be noted that the Block 2B software is very limited, with only a handful of weapons available and reduced flight performance.  The software needed to get the F-35 closer to its promised capability will have to wait until the Block 3C/3F upgrade. 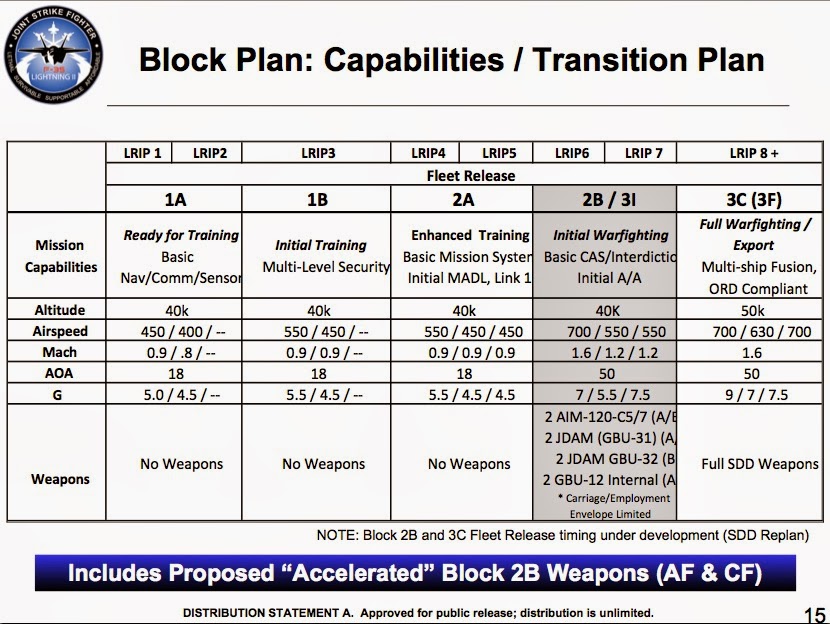 While the JSF has made some progress, it still has a way to go.  In the report, Gilmore states:

It makes you wonder what aspects of the F-35's software is up to snuff.  Lockheed Martin better get its crack team of IT professionals on this.