RAND study: Are joint fighter programs even worth it?

One of the driving forces behind the JSF program has been the effort to save money by amalgamating several different fighter replacement projects into a single effort.  The idea makes sense, in theory.  Why develop two, three, or four separate aircraft when you can develop a single platform capable of all requirements?  Not only is there a promise of saving development costs, but a common platform also promises to be cheaper in the long run as well, with economies of scale providing cheaper construction and sustainment costs.

This is the theory.  Reality has proven to be much different.

A new study performed by the RAND think tank questions the logic behind "Joint Fighter Programs".    Its conclusion:  Joint fighter programs end up being far more expensive in the long run.  Many don't work at all.

Let's look at the TFX program responsible for the development of the F-111 "Aardvark.  The TFX program was intended amalgamate two seemingly similar projects.  The first, to provide the USAF with a fast strike aircraft capable of flying underneath an enemy's radar defenses and dropping its (potentially nuclear) payload on target.  The second project was a carrier based interceptor capable of carrying the AIM-54 Phoenix long-range air-to-air missile for the US Navy.  Both aircraft would require high speed, long range, sophisticated targeting equipment, and two crew members.  The use of a swing-wing to enable the aircraft to fly slow (for carriers and runways) or fast (for interception or strike) was considered a huge plus as well.

With two similar aircraft in development, it seemed sensible to instead develop a single aircraft platform with a variant for each intended use.  This gave rise to the now infamous TFX program.  Both the USAF and the USN agreed to a swing-wing, two-seat, twin-engined aircraft.  The USAF'S requirements were slightly more demanding, so preference was given to the USAF's requirements.  It did keep the side-by-side seating requested by the USN, as well as the "escape pod" instead of traditional ejection seats.

As the F-111 took shape, it became increasingly obvious that it would not hit its weight targets.  While this proved not to be a big deal for a bomber, it didn't bode well for the naval interceptor version.  Experience in Vietnam had also shown that speed and missiles were not enough to win the skies.  This led to the cancellation of the naval F-111B in favor of the F-14 Tomcat.

The end result?  The USAF ended up being stuck with an aircraft that was much more complex and more expensive than it required.  While the F-111A would go on to be a successful aircraft, it was plagued with high costs.  So much so that Australia would have to retire its F-111 because they were too expensive to maintain. 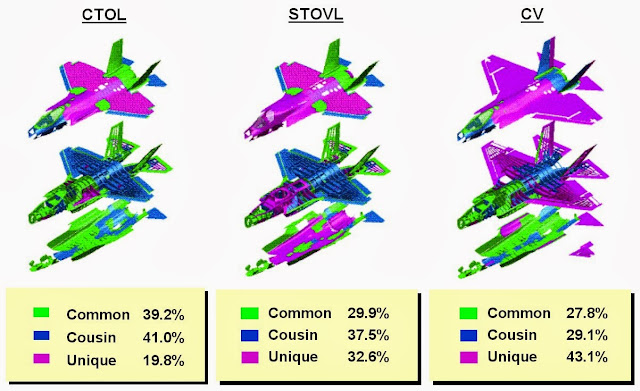 The Joint Strike Fighter program has replicated many of the TFX's problems.  Forcing three services to adopt the same platform has resulted in compromises and development difficulties.  Different requirements have resulted in far less "commonality" between the three versions than planned.  Again, overoptimistic weight estimates have resulted in many shared components needing to be replaced with lighter, variant specific ones.

The STOVL version, the F-35B, has been particularly troublesome to the JSF program as a whole.  Its need for a lift-fan and a vectoring exhaust nozzle dictated general shape of the aircraft.  The lift fan's presence right behind the cockpit means that a more traditional "bubble" canopy is out of the question, as is a centralized weapon bay similar to the F-22, F-111, or other similar aircraft.  The STOVL requirement also places a huge concern regarding the aircraft's center of gravity, with most of the aircraft's weight needing to be placed between the rear nozzle and the lift fan.


But is it all worth it?  The F-35A is far more expensive, yet slower than the F-16 it replaces in the USAF.  The STOVL version, the F-35B, is a huge step beyond the AV-8B it replaces for the USMC.  The F-35C, however, has a different snag (or lack of).  Its tail hook position is so close to the main wheels that it is proving troublesome for the F-35C to "catch the wire".  I fix is in the works, and Lockheed Martin is "optimistic", but the F-35C has yet to land on a carrier.

As far as cost savings are concerned, according to the RAND report, the research and development cost overruns for the F-35 have far exceeded, percentage wise, that of the F-22 Raptor.  Technology wise, the F-22 was a "moonshot".  It was the first air superiority fighter to incorporate stealth, the first to incorporate vectored thrust, and the first to be capable of supersonic cruise.  The F-22 was cancelled early due to its high costs.  By comparison, the F-35 is mundane.  While its sensors are more sophisticated, its actual performance requirements are no higher than the F/A-18.  Only the USMC version, the F-35B is groundbreaking as the first supersonic capable STOVL aircraft.

Then, there is always the chance that the entire fleet of F-35's will need to be grounded due to a widespread defect.  Potentially crippling the majority of western airpower.

The other, not so obvious, cost of the JSF program is the elimination of fighter manufacturing capability.  With Lockheed Martin the sole fighter provider for the USAF, USN, and USMC for the foreseeable future, the ability for other manufacturers like Boeing and Northrop Grumman to stay in the business is in doubt.

But what about those aircraft that did successfully operate with different services?  The F-4 stands out in particular.  It was used by the USN, USAF, USMC, and countless other nations as an interceptor, strike fighter, reconnaissance platform, "Wild Weasel" SEAD duty, even conversion into drones.  The LTV A-7 Corsair shared similar success, being used in both the USAF and USN as an attack aircraft.

How did the F-4 and A-7 succeed where the F-111 and others failed?  For one, both aircraft were developed strictly as carrier based aircraft.  The F-4 was intended to be a strike fighter, but ended up being well suited for the interceptor role as well.  Since the USAF needed a strike fighter as well, it was decided that, instead of developing an entirely new aircraft, the F-4 would be pressed into USAF service.  It was then discovered that the F-4, with its AIM-7 Sparrow missiles, performed as good, if not better than the USAF's F-106 Delta Dart as an interceptor.

As time went on, Navy versions and USAF versions of the F-4 began to vary greatly, with the USAF F-4E becoming more of a ground attack platform, and the USN F-4J becoming a more of an air-superiorty focused precursor to the F-14 fleet defender.


Whereas the F-4 became successful thanks to its impressive performance and adaptability, the A-7 became widespread for another reason:  Simplicity.  Intended as a subsonic ground attack aircraft, the A-7 was exactly that.  Economical to operate, the A-7 was a naval aircraft pressed into USAF service much like the F-4.  This time, it was to fill the close-air-support (CAS) role.

Contrary to the convoluted origins of the F-111 in which it replaced, the F-15E had a much simpler birth.  With the F-111 fleet aging, the USAF needed a new tactical strike aircraft.  For its bid, McDonnell Douglas simply modified its air-superiorty fighter, the F-15, into a strike capable aircraft. This seems contradictory at first, as the F-15 was developed under the mantra "not a pound for air to ground" but the F-15E has gone on to be highly successful strike fighter.

So what does history tell us?  It tells us that aircraft designed to fill multiple roles end up being expensive compromises.  Different service requirements muddle the process, delaying development and rising costs.

On the other hand, sometimes a suitable solution is already available.  In the case of the F-4, A-7, and F-15E, an existing aircraft can be modified to fill a role with minimal fuss.

Then again, those who fail to learn from history are destined to repeat it.

Here's that RAND study... It's worth the read.