November 23, 2013
Many services intending to utilize the F-35 Lightning II will do so as part of a mixed fleet.  For example, the USAF will combine the JSF with the F-22 Raptor.  The USN and the RAAF will fly the F-35 alongside the F-18E/F Super Hornet.  Britain and Italy will combine the F-35 with the Eurofighter Typhoon.


In both Britain and Italy's case, the F-35 is seen more as an heir apparent to the Panavia Tornado.  It should be noted that the Tornado was once considered for Canada's New Fighter Aircraft Program (which resulted in the CF-18), but one of the strikes against it was it was its emphasis on ground attack over air-superiorty.

Why are Britain and Italy adamant on flying a mixed force?  Because the two aircraft complement each other.  The Typhoon's ground attack capability (or lack thereof) is often considered its greatest liability.  The F-35, designed from the offset to provide an impressive strike role, has the opposite problem, according to Italian Colonel Vito Cracas:


“The JSF does not have a high-end air-to-air capability,” he told the conference. We need to have both aircraft.”

Despite all the claims of the JSF's advantages due to stealth, situational awareness, etc; at the end of the day, it is still a ground pounder.  A bomb truck.    Don't get me wrong, strike is a very important role, and the F-35 may indeed be the best aircraft ever for that role, but when it comes to air-superiority duties, like interception and combat air patrol (CAP), the Lightning II may be somewhat out of its element.

Eric Palmer of the Eric Palmer blog puts together a hypothetical scenario of 2 Typhoons engaging 2 F-35s.  The outcome is predictable, (it should be noted that Palmer is no fan of the JSF) but based on sound reasoning. 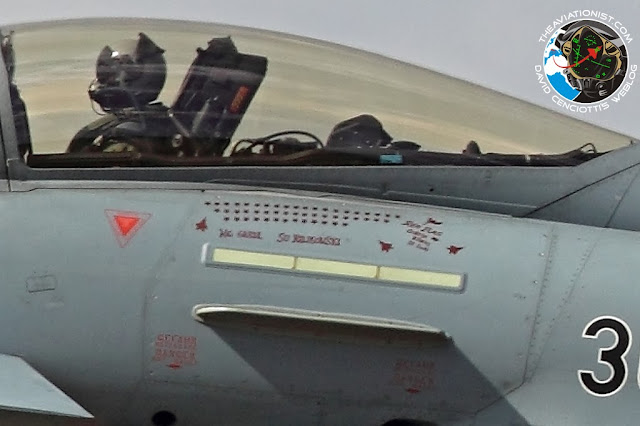 As demonstrated with the infamous "Raptor Salad" incident, even stealthy jets are vulnerable going up against an agile, IRST equipped jets armed with high off boresight (HOBS) missiles.  The F-22 has the advantage of a Mach 1.8 supercruise, vectored thrust, and impressive thrust-to-weight and wing loading ratios.  The F-35 has none of that.  It does have a fancy helmet though...