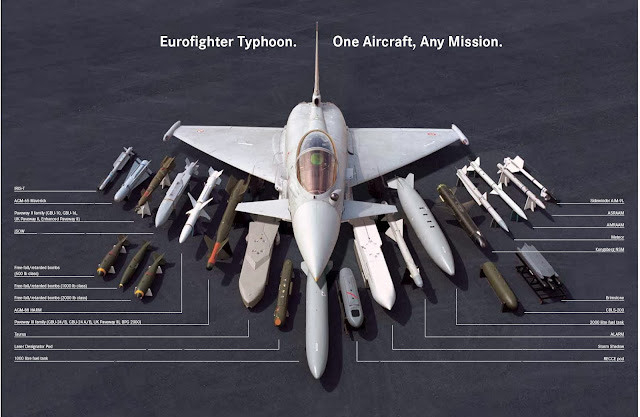 One of the more glaring deficiencies of the Eurofighter Typhoon compared to its contemporaries (Super Hornet, Rafale, etc) has been its focus on air-superiority over strike capability.  As older Panavia Tornados get retired, however, the Typhoon will step up and take more of a ground-pounder role.  This means upgrades.

Most recently, trials have begun incorporating the Storm Shadow air launched cruise missile (ALCM).  The Storm Shadow is a big, stealthy missile with about a 500km range and a 450kg warhead.

If one 500km range ALCM isn't enough, then how about the slightly bigger Taurus KEPD 350?  It's already been ground tested and air trials are said to be happening soon.  The Taurus is quite similar to the Storm Shadow, with a slightly bigger warhead (500kg vs 450kg).

The Storm Shadow and Taurus are big missiles, and placement is limited to the inner wing pylons.  Normally, this is where the drop tanks would be located, but updates to the Tranche 2 and Tranche 3 versions of the Typhoon enable it to utilize conformal fuel tanks (CFTs), freeing up these pylons without sacrificing range.

With increased orders originating from the Middle East, valuable upgrades to the aircraft's weapon systems are taking place.  With the addition of a new AESA radar, targeting pods, and the like, the Eurofighter Typhoon will no longer be seen as a strictly air-to-air fighter.
ALCM cruise missiles Eurofighter KEPD 350 Storm Shadow Taurus Typhoon