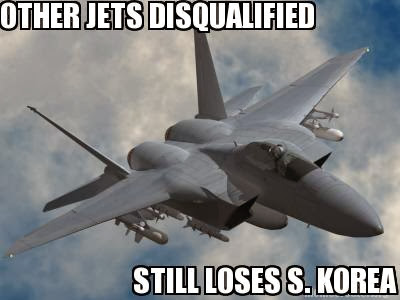 Boeing has been on a bit of a bad luck run lately.  After winning South Korea's F-XIII competition by default, its F-15SE Silent Eagle was unceremoniously booted out of the running for not being stealthy enough.

After word got out that the USN might be ordering a 36 more Super Hornets, the Pentagon quickly kiboshed the rumor.  Now it looks like Boeing will have to shut down production of F-18E/F if it doesn't find orders soon.

Things don't look promising.  The Super Hornet is being pushed as a likely alternative to the F-35 for Canada's next fighter, but that decision looks like it going to be put off until 2015, at the earliest.  That may be too late to keep the Rhino assembly line open.  It currently only has enough orders to stay open until 2016.

What else is there?

Australia is a small victory, but they are only ordering few dozen Super Hornets to tide them over until the F-35 is ready. 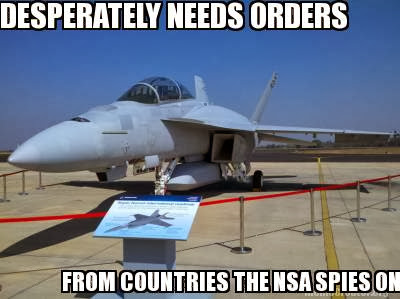 There's Brazil, but they seem to be in an indefinite holding pattern.  Even then, the Super Hornet's chances have been severely hurt by NSA spying on that country, souring Brazil/USA relations.  Brazil's other two choices, the Gripen and the Rafale, don't come with the political baggage.

Other than that...  There's not a whole lot going on for Boeing's fighters.  The Silent Eagle doesn't seem to be making much of an impact, with preference given to either the F-35 or the Typhoon.  The Super Hornet's only real hope is for the F-35C to be a complete disaster.  Until then, the JSF program will likely absorb all the funding needed to upgrade the Super Hornet to make it truly competitive. 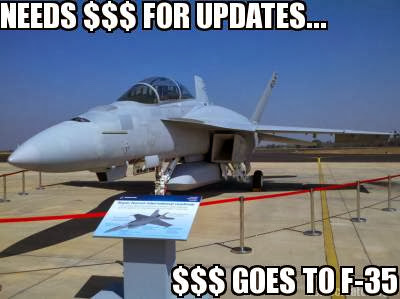 It's too bad.  The Super Hornet has proven itself to be a dependable work horse, and the F-15 is still one of the top jets in the skies today.  To see them both fly off into the sunset through sheer bad luck is a shame.

Hopefully, this doesn't dissuade Boeing from the fighter business entirely.  Boeing has plenty of talent, and the global indecision shows us that there are plenty of countries unable to find a jet fighter that is "just right" for them.
Australia Boeing EA-18 Eagle F-15 F-15SE F-18E/F Growler RAAF S. Korea Silent Eagle Super Hornet