With the continued threat of US military budget cuts, upper brass at the Pentagon is finally starting to come around to the simple truth...  Current fighter fleets are soldiering on well past their prime, and are requiring life extension programs and upgrades to remain effective.  The JSF is still years away from operational status, with all signs pointing to further delays, and there is a very real possibility of outright cancelation.

Reality is setting in...  They might need to find an alternative to the F-35.

Their simply isn't time or resources to build an all new design.  The F/A-XX is still years away from any flying prototype, and securing funding for such an undertaking may prove to be a challenge in and of itself.  Any "plan B" will have to be an existing design, or, at the very least, heavily derived from one.

This one is easy.  It's pretty much confirmed.  The U.S. Navy is contemplating ordering more Super Hornets through 2015.  It's a no brainer, really.  The F-35's tail hook problem still hasn't been solved and the Rhino has proven to be a decent workhorse.  It has its issues, but the Super Hornet is cheap and proven.

Slightly less likely is the "Block 3" or "International Roadmap" version of the Super Hornet, with conformal fuel tanks, a weapons pod for stealthier operations, and more advanced sensors and cockpit.  There's even the possibility of upgrading the GE414 engines for more power.

If the F-35 is cancelled, the "Ultra Hornet" could end up being the sole fighter of the USN fleet for the majority of the 21st century.  Not bad for design that was once passed over by the USAF. 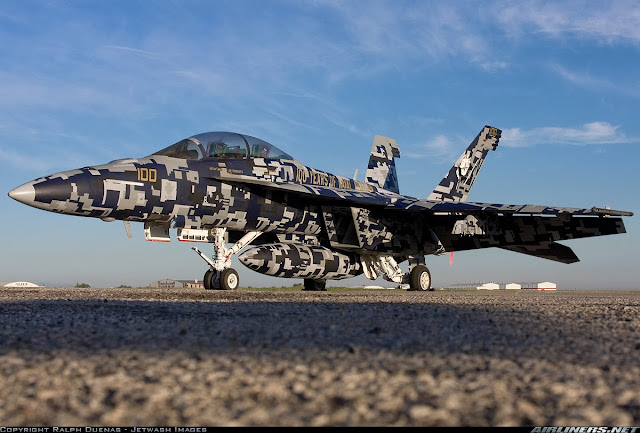 Again, the choice here is very simple.  The USMC already fly the F/A-18C/D Hornet, upgrading to the Super Hornet seems like the obvious choice.  They can take advantage of cross-decking with the USN aircraft carriers, as well as other benefits of sharing a platform.

Replacing the AV-8B Harrier might be a little more of a challenge, however.  The F-35B is the only STOVL fighter in development right now.  There's really no other choice...  Unless STOVL operations can be replaced by STOL capability.  Then again, basing multi-million dollar STOVL fighters on the front lines may not be the best idea, anyway.

The A-10 isn't a true STOL, but it does have excellent performance on short and rough runways.  It's a tough, sturdy platform, and it would seem to be an excellent fit for the USMC.  In use currently by the USAF, they may be dropped from service very soon, despite currently undergoing a wing replacement program.

While it would a great deal of modifications to operate off the USMCs amphibious assault carriers, the A-10 would likely otherwise be a welcome addition to the Corps.

This one gets a little tougher...

The USAF seems to be "all in" with the F-35.  There doesn't seem to be much else on the radar for them.  This is kind of scary.

The F-15 is pretty easy.  The F-15E Strike Eagle is the USAF's "newest" fighter at 20-something years old.  The airframe is robust and current models will be able to fly for years to come.  Barring that, F-15 assembly lines are still running thanks to foreign orders and Boeing would likely very much enjoy keeping them open even longer.  Convincing the USAF to order its "Silent Eagle" would be a huge coup.

As for a possible restart of F-22 Raptor production...  Forget it.  Not going to happen.  It was already cancelled due to high cost, both to purchase and operate.  The jet itself has had some rather worrying issues.  It would be nearly impossible for the USAF to come up with a compelling reason why it needs more than the 187 copies in current use.  Yes, the tooling still exists, but don't expect them to bring it out of storage for anything less than WWIII.

The real workhorse of the USAF fighter fleet, the F-16, is the real quandary here.  If the F-35 gets cancelled, there is no real obvious "plan B".

There may be, however, two feasible options.

Either the Eurofighter Typhoon or the Saab Gripen could be added to the USAF fleet with little effort.  Both are compatible with current USAF bombs and missiles and have flown alongside American forces in the past, both in training exercises and in combat.

Saab is reportedly in talks with Boeing to collaborate on the USAF's next trainer, so a Saab/Boeing Gripen marketed to the USAF isn't that much of a stretch, as I have mentioned before.  The Eurofighter, on the other hand, is produced by some of America's key NATO allies, and a Typhoon purchase may help a repair some recent hurt feelings.

Rafale enthusiasts (you know who you are) may feel left out on this one.  The Rafale would likely be a distant 3rd choice here.  Its only real chance here would be if the Pentagon decides to keep the "single platform for all" mentality and order Rafales for all three services.  It is the only real alternative to the Super Hornet as far as carrier based aircraft go.

Convincing Americans to buy a foreign designed fighter jet might be a non-starter.  Even with a strong U.S based partner, past foreign purchases have been niche products for the most part.  Having a European based defense contractor take responsibility for the production of thousands of fighters might result in pure outrage.

That leaves no other choice but the Super Hornet or a updated F-16 Fighting Falcon...  Like the F-16XL.

Developed initially as a supersonic cruise prototype, the F-16XL utilized a stretch fuselage and a radical "cranked arrow" wing.  This gave it improved high-speed performance, an increased payload, and a much higher fuel capacity.  It could carry twice the load of a regular F-16 and fly 40% further.  The F-16XL later became a contender for the USAF's Enhanced Tactical Fighter program to replace the F-111B.  Losing out to the tougher, more survivable F-15E Strike Eagle, the F-16XL would go on to become a NASA test platform.  During its testing at NASA, the XL was fitted with more powerful GE F110-129 engine (as now used in the F-15K) and accidentally achieved supercruise.

A F-16XL with an updated (but proven) engine and all the Block 60 upgrades would be a substantial improvement to the current USAF F-16 fleet.  It would also be very low-risk and low-cost, with the F-16XL being extensively flight tested over the years and with the F-16 airframe itself being one of the most ubiquitous and affordable modern western fighters.

Of course, the biggest obstacle facing a modernized F-16XL is that its parent, General Dynamics, has been absorbed into Lockheed Martin, the very company responsible for the F-35.  No way would LockMart risk cannibalizing the largest defense contract in history by offering the F-16XL as an alternative.

We can go our own way.

The good news with the RCAF right now is that there still isn't a true commitment.  As frustrating as the "reset" may be, it still gives Canada an "easy out" of the JSF program if things get sour, or simply if a better deal comes along.  We can choose to simply mirror whatever the USAF does, we can choose an "interim fighter", a mixed fleet, or simply pull out altogether and go our own way.

Of course, with all the uncertainty facing the U.S. military over the next few years, it may prove wiser to simply go out on our own now, and avoid the rush later.