[Note:  This post was initially shown in gripen4canada.blogspot.ca.  I am including it here as proof that Canada can indeed design and build a great aircraft! 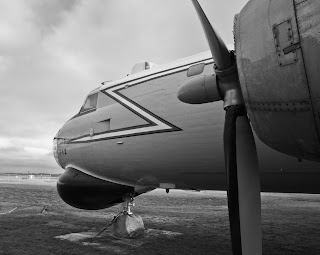 Many Canadians look back in time at the Avro Arrow and the potential it promised.  A grand military construction project that was years ahead of everything else, perfectly suited for Canada, and worthy of our pride.

Yet people tend to forget about another Canadian military aircraft that originated in the 50s.  One that was the most advanced and capable model of its day.  One that was designed, built, and flown in Canada,  the CP-107 Argus.

It's easy to understand why the Argus doesn't have the same mystique as the Arrow.  A big, lumbering, piston-propellor anti-submarine warfare (ASW) aircraft just isn't as sexy and exiting as a sleek, mach 2 jet fighter.  (Otherwise, Tom Cruise would be flying a S-3 Viking in Top Gun, instead of a F-14 Tomcat.) The Argus was no less important however.  The threat of nuclear missile equipped Soviet submarines was very real in the Cold War, possibly an even greater threat than Soviet bombers. 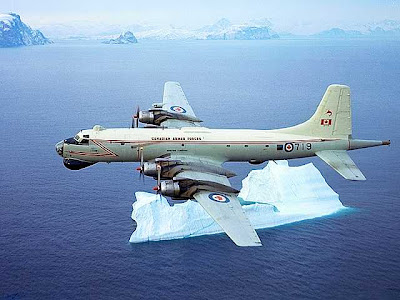 Replacing the WW2 era Lancaster, as well as the interim CP-122 Neptune, the Argus was larger, carried more advanced equipment, and had a longer range than any other aircraft of its day.  Based on the airframe of the Bristol Britainnia airliner, the Argus is almost unrecognizable to its donor design.  The low-flying ASW mission required heavily modifying the fuselage, as well as swapping out the Britannia's turboprops for more fuel efficient (if seemingly archaic) piston powered Wright R-3350s, the same engine used in the B-29 Superfortress.  A large magnetic anomaly detector (MAD) boom is prominent at the rear of the plane, and it is equipped with sonobouys for submarine detection and could carry an assortment of bombs, torpedoes, and depth charges in its weapons bay, as well as the capability of mounting additional weapons on wing pylons if needed.

The Argus was quite a sight in the air.  So loud it literally made the ground shake as it flew overhead, leaving a trail of greasy black smoke behind each engine.  Throughout the plane, various sensors, radars, viewports, and antennas gave the Argus it's characteristic "lumpy" look.  Inside, the aircraft was very utilitarian, with little of the creature comforts of the airliner it was based on.  It did have several bunks for crews to rest on while on long flights, and a well stocked galley that was often the social hub of the aircraft.  In front, a large observation port an unparalleled (and quite scary for those with acrophobia) view in front of the aircraft. 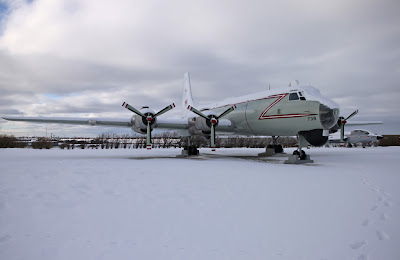 The Argus would go on to enjoy a very successful career.  Although it did not enjoy any foreign sales, it was loved by its crews and it protected Canada's coastal waters for 25 years.  It served during the height of the Cold War and even played a unsung role in during the Cuban Missile Crisis.  It was also the world record holder of longest unrefuelled flight (31 hours) until the purpose built Rutan Voyager made it's non-stop flight around the world.  Not only did it perform ASW duties, but it was tasked with fisheries enforcement, arctic patrols, and anti-drug smuggling operations as well.

The Argus was eventually replaced by the CP-140 Aurora.  By most accounts the Aurora a better aircraft; more modern, faster, and more comfortable for its crews.  It also lacks some of the Argus's personality and proud Canadian heritage.  Although built to Canadian specifications, the Aurora is, at its heart, an American P-3 Orion with S-3 Viking equipment added for extra capability.


In February, 1982, the last Argus flight took place, delivering number 742 to the Canada Aviation and Space Museum in Ottawa.  Flight Engineer Captain H.S. "Spike" Allen, who had served as Flight Engineer in the Neptune, Argus, and Aurora served on that final flight.  Throughout the years he made it clear to his sons that, although the Argus was a great aircraft, it was the people operating and maintaining it that made it truly special.

For more information on the Argus, go to cp107argus.com, canadairargus.blogspot.ca, or pick up a copy of The Canadair Argus:  The Untold Story of Canada's Cold War Maritime Hunter. 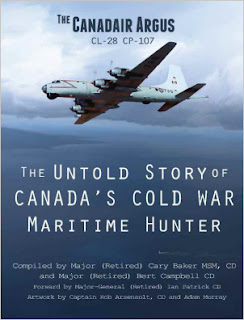